A variety of ills can be laid at the feet of glaze fit, or rather lack thereof. Glazes crawl or craze or shiver, or, if you're me, sometimes they split pots into shards. Desirable effects such as crackle or beading are also manipulated via glaze fit, which determines the amount of tension or compression that the glaze is under.It behooves a potter to understand what makes glazes fit or not, and if they don't, what to do about it.

First off, there's surface tension, and then there's viscosity, and they aren't the same things, though both apply to the liquid qualities of molten glaze. You can observe surface tension if you fill a glass of water just a skosh over the rim. Similarly, if you pour out water on a smooth surface, it wouldn't distribute itself evenly in a flat layer; it will roll up into small beads. Glaze also has surface tension, and if it is too great, it will cause the glaze to roll up into beads, also, resulting in the defect known as  crawling. Happily I do not have a good example of crawled glaze around here.Viscosity is the tendency of a liquid to flow. It is not entirely synonymous with thickness, there being some blah-blah about internal friction that distinguishes the two, but for your purposes they are pretty much interchangeable. Glaze which is too viscous in the molten state can also crawl. 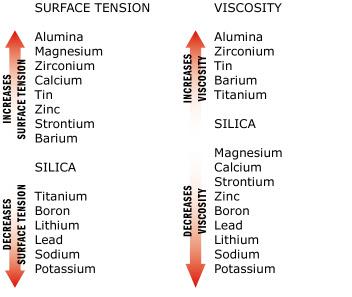 Ever so helpful! Now, my shattering dessert dishes were caused by a different sort of glaze tension: the tension caused by mismatched thermal expansion. In this case, the glaze has too great a coefficient of thermal expansion during heating, which causes it to shrink more than the clay during cooling. The difference can be enough to pull the piece apart, unless there is corresponding pressure on the outside, which is to say, the piece is glazed both inside and out. These are the five solutions put forth at Clay Planet.
The opposite situation - where the clay expands more than the glaze, and then shrinks more, will result in shivering - little (or not so little!) flakes of glaze will chip and break off the piece, because the coat of glaze is too large for the pot and is being compressed to fit ti so much that it buckles. You don't see shivering nearly so much as crazing, but when you do, the go-to fix is to increase the feldspar.
Posted by Lori Watts at 9:27 AM