The great Barry Manilow captured the melancholy of late October, as we spin into the dark half of the year. My wallow in that bittersweet feeling needs to be brief, however, because October's end means a very busy time in the studio.

First, I've got new pots in the online shop! Here are a couple of my special favorites:


The online store will be open & adding new items every week until the first week in December.

I'm also preparing for the opening of the Holiday Pottery Shop, which opens in about two weeks. This year the shop is at 160 Water Street in Hallowell. OMG you should see this big beautiful space!! It's the site of the former Harlow Gallery, and has me musing about renting it to open a year 'round store, after the Holiday Pottery Shop pops back down. That's probably little more than a daydream but...it could work. There's space in the back for a wheel & work table & even an electric kiln to bisque, so I wouldn't lose studio time....it could work....

ANYWAY. I've got enough to think about in the present. Orders, consignment stores that need inventory, oh and.... 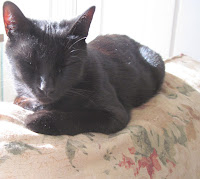 I didn't really mean to get a sixth cat! Actually I tried pretty hard not to get a sixth cat, but cats happen, especially to me. SkinnyCat has been hanging around our house for about a year & a half - he was our neighbors' cat, although they seemed to be a little rough with him; they had small children and Skinny was always limping or seeming injured. Around the beginning of September, we started to notice that Skinny was not looking too good: he was even skinnier, was losing fur and covered with scabs. Then we noticed that he wasn't going home anymore, he was just living in our shed. When we walked over to speak to his people, their apartment was vacant! They had moved away without SkinnyCat! We'd been leaving food out for him anyway, but we started making sure he got two meals a days & had a safe warm place to sleep in the shed while we looked for someone to take him. I actually did find someone willing to take him, but it took about 6 weeks...by which time my husband Doug had really bonded with Skinny, who is an affectionate little lap cat. He (Doug, not SkinnyCat) just looked at me and said, "I don't think I can let him go."

Doug's mother is very ill, & the whole family is having a hard time with it; if one more cat provides him with some comfort, that seems a small ask. So here we are, introducing SkinnyCat to his new family.

Anyway that's my autumn so far! How's yours?

The New Messy Minute is out! 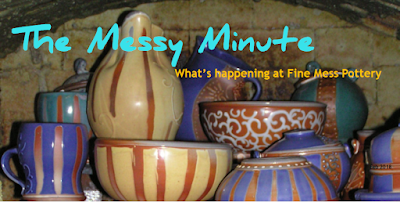 Hey all - long time no post! I'd say sorry but honestly I'm probably the only one who notices. 😊 Hoping you are having a fabulous fall. I just sent out the Fine Mess Newsletter, the Messy Minute - you can sign up for the mailing list by emailing me at info@finemesspottery.com. To check out the Messy Minute in .pdf form, click here. [ETA: A reader clued me in that that .pdf opens as 127 pages long! They are all the same page, but even so it takes like 40 seconds to open. I have no idea why that happened; I built it in Publisher & saved it as a .pdf, nothing fancy. Anyway, you can still read it there if you want, or just shoot me an email & I'll send it to you. ]

I missed a couple of editions, but hopefully back on track now!
Posted by Lori Watts at 10:39 AM 3 comments