Some favorite pieces from the last firing: 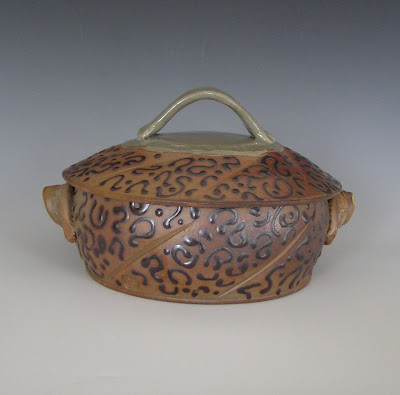 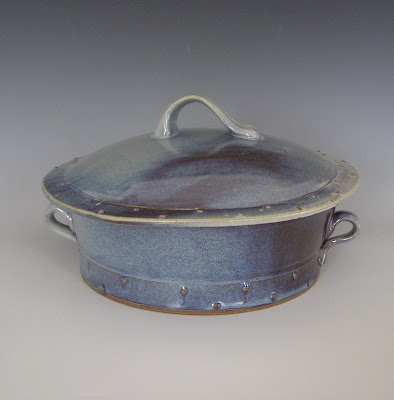 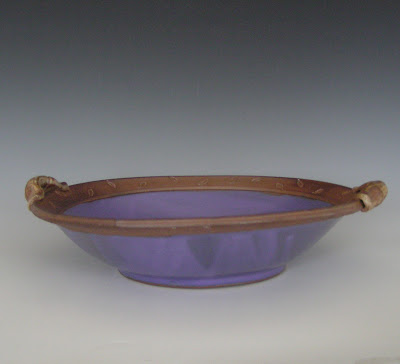 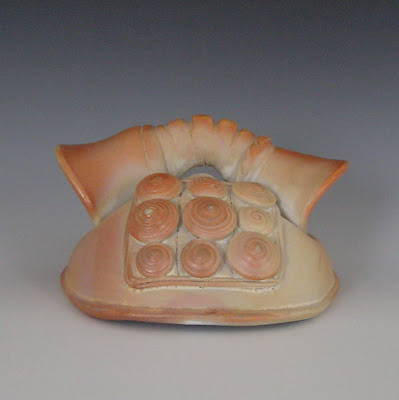 I am especially delighted with the vermiculations ("worm-shapes") on the top casserole. Though somewhat labor intensive, it's very restful, hypnotic work; and they nave a nice, intriguing texture. I have used these once or twice before, and I like them especially well when they get a good blast of soda, causing the worms to soften or even flow down the side of the pot in a cascade of glaze and soda.

I took these photos myself (yes, as if anyone needed to be told), accounting for their blurriness. (Jay York I am not.) I'm told that I could avoid the blur by using a remote shutter for the camera, which we have, somewhere around here, becuase it is the slight motion of the camera as I press the button that causes the problem.
Anyblah, good firing! Most of the pieces are already spoken for, so I need to get making again. 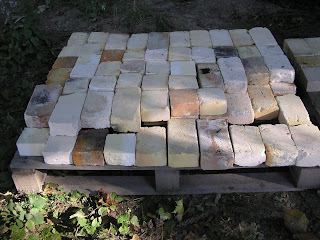 The first bricks for the new kiln! Doug, inveterate scavenger that he is,  rescued these from the rubble pile at Watershed. They were piled amid broken pots and tiles and great slags of discarded clay, but there were lots of usable brick, especially many that could be cut down to halves or soaps.

Now that the kiln pad is protected under a roof, my last excuse for not rebuilding the kiln itself has evaporated. The old kiln, which has an origin story to rival any superhero, has not been, since it came into my possession, capable of reaching Cone 10 in reduction; nor could it ever be used for soda, due to being constructed of soft brick in a steel jacket. All of which renders it only useful as a bisque kiln, for me. Not that I am complaining -- it has served well in that capacity, and I have been lucky to have a relationship with Watershed whereby I can use their kilns for my glaze firings. Nevertheless, it's time to put on my big-girl panties and start dealing with the necessities for constructing a new, Cone-10 capable, soda-tolerant kiln.

I actually put one foot into the big-girl panties last winter, when I downloaded plans from the site of Dave and Mary Cuzick, of Cuzick Pottery. Though I made  little progress in the months that followed, that step was a crucial one, as it transformed the new kiln from a vague, half-formed notion of something I might someday be able to do into an actual doable thing, with a finite list of necessary materials, all of which might be obtained by a potter with sufficient determination.

While at SIUE, I took part in the construction of several kilns, but that was mostly just stacking brick wherever someone told me to. My studiomate & I built a dual-firebox, woodfired kiln while I lived in Minnesota, but Mary Jo was definitely the brains of that operation. This time, there's just me. Doug will help build, of course, but I'm the one who is supposed to know what I am doing. Ha!

The Cuzick plans (which originate from San Diego State University) are excellent but I will probably need to deviate signifcantly from them, as I will be using existing burners, and, perhaps, the existing castable arch. That last is under consideration: arch brick is expensive, and it's hard to find what you need used; but using the old arch will mean staying within the footprint of the old kiln, where it might be nice to go larger. Still: plenty of things I can do before I have to make that decision. Like scrounge up used brick! Today's task is to take photos of the small gas kiln at the 'Shed - it is the perfect one- (or two-) potter size, and it fires quickly and evenly every time. I'd have to modify it for soda, of course, but I want to document the layout.

Farewell to the Man who Made Pottery Sexy 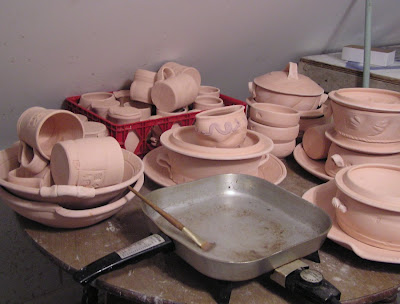 For some reason I always enjoy waxing day in the studio. It's a sort of mindless task that falls between making and glazing, one which only requires a small portion of my attention, leaving the rest of my mind free to wander over hill and dale. Tomorrow is glazing, a much more active task, physically and mentally.

And, while I am humming, and waxing, and thinking about chaos theory, and evolutionary psychology, and a million other things, Doug is finishing up the kiln roof, yay! 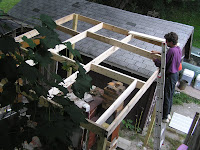 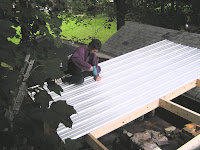