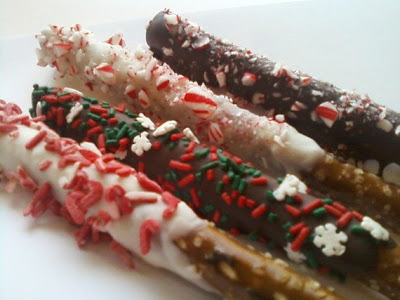 ...You were a most amazing year. Not an easy one, by any stretch, but a good one all the same. Well, except December. December kind of sucked, but it's nearly over.

Since my Harrowing Highway Incident, I have had a change of outlook; not unlike Scrooge after his spirit visitation. Mine came too late for Christmas but I am nevertheless feeling quite festive, on account of being alive. Belatedly in the holiday spirit, I am full of ideas for next year, including this great gift idea: a bouquet of chocolate dipped pretzel rods, in a handmade mug.  I ain't just whistling "Jingle Bells;" I went and bought the ingredients and made some up, for photos.

Total Time: 33 mins
1) Melt milk chocolate chips in double boiler or in microwave (be careful not to burn in the micro).
2) If you are using the white chocolate, wait until later before melting unless you can keep it over warm water.
3) Dip each pretzel rod about 2/3 of the way up in chocolate.
4) Lay on wax paper lined baking sheets, lining up the rods but leave a bit of space between them.
5) Allow to set a little, but not completely dry (while waiting, make sure your white chocolate is ready).
6) Dip a fork into the white chocolate and drizzle over the milk chocolate by gently swishing the fork back and forth over the rods but not touching them.
7) Place your sprinkles or candies on a paper plate and roll each pretzel rod in desired topping (or just sprinkle on).
8)Lay back on wax paper to set completely.
9) Tie up with a bow and give in a handmade mug!

Two things: I had better luck after I added a little bit of vegetable shortening to the chocolate, for a smoother coat. I later read that some people add parafin wax for the same purpose, and because it makes the chocolate harden better - important if the gift has to travel any distance, like, say, out of your kitchen. Kind of like adding CMC gum to glaze, for a stronger dry coat.

Oh -- the photo at the top is not mine. My first efforts were too ugly. The ones in the photo came from this Etsy seller.

My annual week of reflection has been postponed until next week, due to car, travel, and work issues, but never fear, reflect I will. It's worked so well so far!

Back at the Wheel!

It's been weeks since I threw anything, outside of class demos. The long months during which I had no means to fire left me with plenty of greenware (now mostly bisqueware) so I am not making out of any need for inventory, but, blessedly, creative impulse. Throwing, altering, and assembling remain my favorite aspects of the ceramic cycle, although I am gaining an interest in more active glazing: brushing, trailing and using resists rather than plunking it in a bucket an hoping for the best. (I still do my fair share of plunking, as well!)

There's something very soothing about throwing and assembly, though. After creeping, creeping for months, ever-closer to the goal of a functioning kiln, it's nice to get that feeling of completion in seconds. The kiln-tweaking will continue, but I am on a sort of enforced hiatus, as I need to pay for the propane I've used getting this far, before I can fire again. I am hoping for another shot in January.

By my own long tradition, I start back at the wheel with a board of mugs. Ah, mugs! Quick and endlessly variable, and if one doesn't work out, wedge it up and start again.

More Pots from the Firing 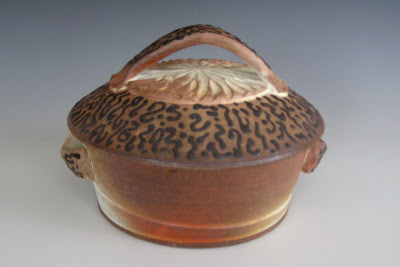 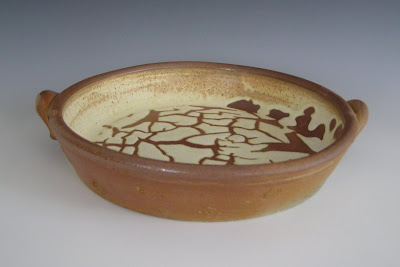 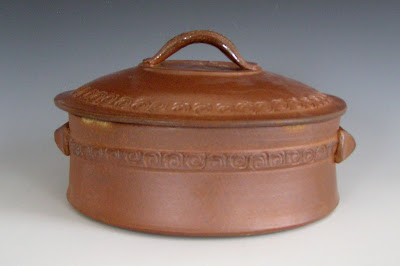 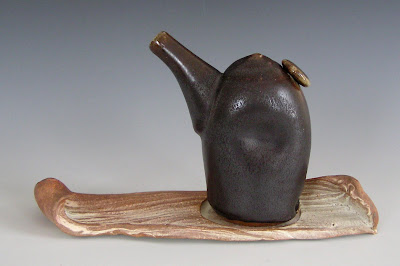 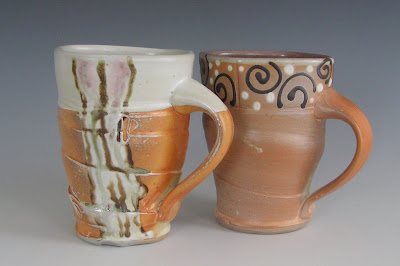 They aren't this blurriy, in real life. My photo set-up relies on natural light, and on a snowy day in December, that is a scarce commodity. It amazes me that they can be blurry even though I am using a remote shutter control: literally nothing at all is moving. Anyway, here they are.
Online sale here!
Posted by Lori Watts at 7:59 AM 2 comments 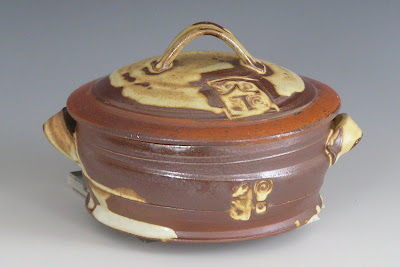 Let me turn your attention to Exhibit A: it ran, yes, but the dominant glaze flaw here is crawling, caused by a cool bisque. This casserole was at the top of the kiln during the bisque firing. 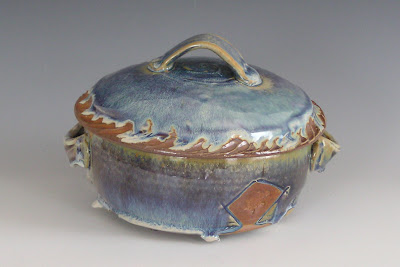 And now, look to Exhibit B: A rutile blue glaze that has historically been stable to ▲11, fully down; in this case it ran like a mad bastard, in the bottom of the load. Ladies and gentlemen, I think we are looking at ▲12 or more.

Incidentally, I like both of these pots, though they will need some grinding, and so must necessarily be seconds. The flaws do not compromise the function in any way, so these will be bargains at half price: $22 each.

So, nine up top, twelve at bottom...what's a poor potter to do? I had a good suggestion, from my dear friend Paul Mahoney of Friendship River Pottery: adjust the bag wall. I am thinking to raise it two rows or more, forcing the flame (and soda) upward before it can find its way out the flue.

I also plan on making better use of the passive dampers next time around.

Keep those cards & letters coming!
Posted by Lori Watts at 6:36 AM 0 comments

The Good, The Bad, and The Refires 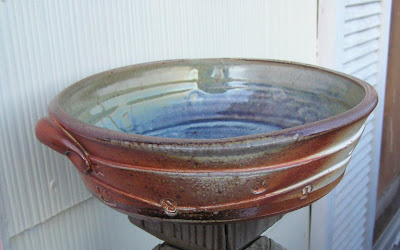 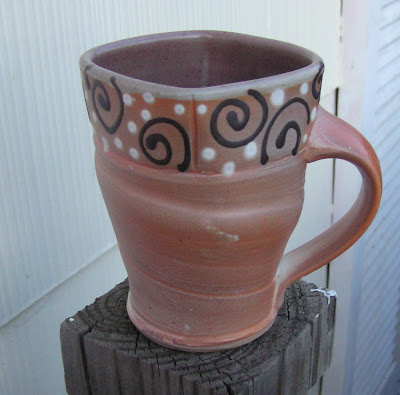 Hoping for the best while expecting the worst has become my secret default posture when it comes to the never-ending story of this kiln; so I was pleasantly surprised when I cracked the door around noon, and peering in, was greeted by a pot that didn't suck. Right there! In my kiln! How did that happen?

My hopes dipped when I removed the first big block; things were looking pretty dry in there. But wait! There's another non-sucking pot! And while there were a couple on that first layer that had cracked or crawled, even the unsatisfactory pots mostly didn't suck out loud; they were just dry, due, I suppose, to this being the first firing. I nearly doubled what would be a standard application of soda, but it looks like maybe I should have tripled it. Some pots, too, would have benefited from a solid cone 10, instead of the barely-nodding version we reached, but most on that first layer were just a little dry.

Now cautiously optimistic, I took a break to allow more cooling (mixed up some pizza dough in the bread maker -- Doug is a cham-PEEN pizza chef.) The first layer out, I removed another brick to reveal the next. Still some dry refires, but not as dry, not as many. ..and some really nice pots! Onward, next layer.

Bingo. This layer clearly didn't fail to reach temperature. In fact, when I get to the bottom, these pots look more like Cone 11+ than 9 or 10. I wish I had put cone packs in the lower part of the kiln -- didn't think of it until too late. This is useful information, though: I am dealing with a different problem than I thought. My troubles are not twofold -- slow firing and failure to reach -- but only one: uneven firing. The bottom probably reached temp hours before I shut it off. judging by the running on the few pieces glazed on the outside. Top cool, bottom hot...what do ya make of that?

I'd love to take more photos, but it is going on 4 pm -- "dark o'clock" here in Maine. More tomorrow.

Well, more or less. At 5 am, with ▲10 beginning to bend, the burners began to lose pressure. I feel pretty confident that it was enough, as most of my glazes will go at ▲9, and these had the additional nudge of 5 lbs of baking soda and soda ash; plus a 1/2 pound of salt for good measure.

So, good news and bad: the good news: well obviously. Also, the kiln appeared to be pretty even and easy to keep in a deep or light reduction. The bad news: this was a crazy-long firing, 15 hours, and in the end the cone did not entirely fall. (It still might have done; the gauges read that the burners were losing pressure, but the difference was undetectable just by observing the flames.) 15 hours is unacceptable, of course, but it now just seems like a matter of tweaking. Another foot or two on the stack, and proceed more quickly in the early bit of the firing, or...any other suggstions?

I plan to spend most of today in bed, reading The Physics of Superheroes. Unloading will be Saturday, photos Sunday, if all goes well.

The propane guy is here, and you know what that means: today is the day I light the kiln and try again to complete a soda firing. I am far more anxious this time, for obvious reasons: if it doesn't work, I am out of ideas of what to try next and probably out of commission until March or so, after I get some of these expenses paid down.

Anyway. Those are bad-luck thoughts! Start the first burner, brew up the rainforest nut, and we're off.

Reach For the Sky

As of yesterday, the stack towers around 15.5 feet -- about 13.5 feet of interior height, which is the part that matters as far as heat dynamics are concerned. Doug built the upper four feet of the thing, with me just handing up bricks, due to my not-quite-paralyzing fear of heights.

I am nerving myself up to try firing again on Thursday. I am waiting for a propane delivery: not that I necessarily think I will need it, but I'd hate to see nine starting to go and then...What the hell?...Out of fuel! So for the first (yes, I'm still calling it the first: I never unloaded the pots!) firing I'd like to start with full tanks.

I am not sure how being fired to 05, then cooled completely, then refired, will affect the outcome. The pots from this firing will carry a big "Results not typical" asterisk, but I am of course hoping for the best.

For all my unsinkable optimism, the expense is starting to disquiet me. Brick, wool, propane...I was supposed to be done by now, and selling the fruits this Christmas season. But no matter: there is no going back, and nothing to do but just do it 'til it's done. Damn the torpedoes -- full speed ahead!
Posted by Lori Watts at 10:53 AM 1 comments