Good news! The second of our sponsored kitties, the shy, sweet Patcha, has been adopted. In celebration I treated myself to a new tool: the Bat Mate, from Xiem tools. Firstly, though, a question: why, why-o-why, did they not call it the Bat Mat? Hear how it trips off the tongue: Bat-mat. Bat-mat. Bat-mat. 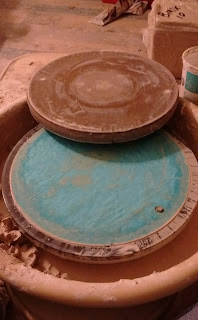 I would have called it the Bat Mat, because that what it is: a circular chamois (I think?) mat with holes spaced for bat pins, that goes on the wheel head under your bat. It prevents the bat from doing that annoying shimmy thing while you are trying to center. I've been preventing that by smudging some clay on the wheel before putting the bat down, but that takes a minute, to make sure it's nice & even, and wastes a bit of clay. I have known about these for a while but was resistant to buying one because, as the the World's Cheapest Human, I didn't want to spend the nine-ish bucks for something that I could do without. I've changed my mind about that! My time has value, too, and a device that makes my studio work a little more efficient every day is easily worth the price.

After using it, I can say, it very effectively prevents the aforementioned annoying shimmy! It does not, however, solve the other problem I had hoped it would, of the bat being so firmly stuck down to the wheel that I need a tool to lift it up. I guess next I'll be needing a bat lifter. Or just keep using the paint scraper I keep by the wheel for just such purpose.