ETA: Oreo has been adopted! Fiona is still waiting for her forever home.
Our cat dish fundraiser was successful! I tried to go in on Tuesday to sponsor a cat, but I forgot about the Covid restrictions, and failed to make an appointment. The shelter is closed on Wednesdays, so today was the big day! I had intended to sponsor a cat named Oreo, who has been at the shelter for 5 long months.
Let me tell you a little bit about Oreo: she is a 3 year old tuxedo cat. Staff describe her as a silly girl, who is playful and curious, and loves attention from her people. She needs a prescription diet to prevent urinary tract infections, but the diet works well for her & she has not had any problems since starting it. She also needs to be the only pet in the home. But, good news! Between last week & today, someone else had already sponsored her!
So I asked the staff to suggest a cat, and here she is: Fiona!
Fiona came in as a stray, and staff described her as having "lots of personality. She is 2 1/2 years old, and when I met her, she tried to play through the plexiglass of her cage. (She actually looks a lot like my cat, who - weird coincidence - was originally named Fiona, though we call her Noodle now.)With the proceeds of the fundraiser I was able to sponsor Fiona, plus a little extra to support the shelter. So now there are two kitties at the Kennebec Valley Humane Society whose adoption fees are covered! I want to thank everyone who purchased a dish or shared the post - we did it together!
The dishes are all on their way to you now. 😊
Posted by Lori Watts at 11:40 AM 3 comments

It's that time again: Help a cat find a home 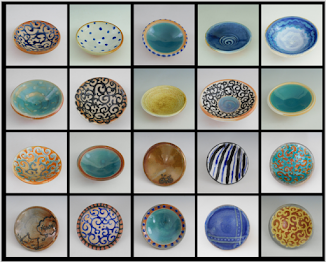 You may know that I am something of a cat lady; not entirely on purpose, I have six feline friends who share my home. My capacity to care for cats is maxed out! But I still want to help. Every year for the past couple of years I have done a fundraiser to allow me to sponsor a cat at Kennebec Valley Humane Society. I try to choose a cat whose stay in the shelter has been long, to help them get out of the cage & find a family.
I got  lots of great cat dishes out of the firing I unloaded last week, so it is time once again for a Cat Dish Fundraiser!

If  Oreo is still available

when the fundraiser is over, I think she will be the one. He has been at the shelter since April! If she finds her home before that, well, there are lots of lovely cats waiting. No matter what we will help someone!
The dishes are $15 each. If I can sell 10, that will cover Oreo's adoption fee (or whichever cat it ends up being) as well as shipping & packaging materials. Check out the dishes here!

Thanks for looking! If you can buy a dish this time, great! If not, maybe you could share to your social media? The more eyes this reaches, the better.

Thanks! I will keep you posted.

We did it! On Tuesday I will pop in to KVHS to sponsor Oreo, or, if she's been adopted, whichever cat has been there the longest. Thank you thank you thank you!!
Posted by Lori Watts at 8:03 AM 1 comments

My Fave from the Firing 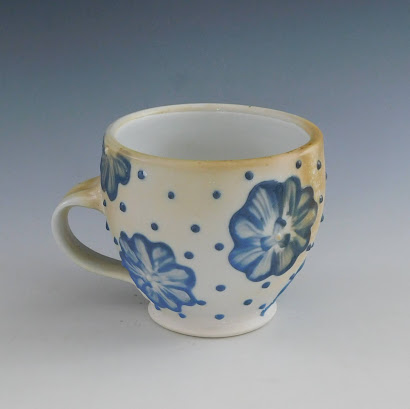 It's porcelain with slip trailing. It got only the barest blush of soda, and I just love the delicacy of the color. Being porcelain it has a bit of sheen even without glaze or soda glass.
Posted by Lori Watts at 2:35 PM 2 comments

Not Another Learning Experience! The Pop Up Photo Booth Edition

I unloaded a firing on Friday. It was supposed to be Wednesday, but my laptop was stolen Tuesday night, so Wednesday & Thursday were burnt up in all the process involved in that - police report, contacting my banks & credit card companies, all that stuff. Boy do I have a lot to say about that experience, but I'm gonna save it for later, because, new pots! It was kind of a shitty week, but at least the kiln didn't let me down.

I spent today photographing pots, some new out of this kiln, some that I've been planning to shoot for a while. I tried a different photo set up: one of those nylon pop up tents. A friend - Libbey Seigars of Whitefield Pottery - gave me one of those pop-up photo tents last year. She wasn't happy with the results she was getting, so didn't want it anymore. It takes me a while to get around to things, but today I finally gave the it a shot. The advantage, I hoped, was that I could just pop the tent up & start shooting, as opposed to my indoor setup which requires me to re-arrange my living room, pin up a backdrop, and set up three lights. I usually don't want to do all that for just a few pots, so I wait until I have a bunch, and then shooting & processing the images - never mind listing the items for sale - becomes an all-day deal.

That was a learning experience, and what I learned was, those pop up photo tents suck! I eventually gave up & just set up my backdrop & lights as usual. The point of the pop up booth was supposed to be that it was easier - just pop it up on a sunny day & start shooting. Well, the pop up part is easy, that much is true. Getting the wrinkles out of the backdrop - even though it was stored carefully - was not. What eventually worked (kind of) was putting it in the dryer on high heat for about 10 minutes.

Once the only-a-little-wrinkly (me: I'll fix it in post!) backdrop was in place, I had to find a block or something to place the pots on, because the opening for the camera was a lot higher than the floor of the ten, so the camera was looking sharply down on everything. (I put bricks under the backdrop, but the angle was still not great. All of that would have been tolerable if the photos had been good but - guess what? - they weren't!

Here are two photos of the same pot, one taken in the pop up tent, one taken with my usual photo set up:

To my eye the second is just infinitely better. I did my best with editing but the pop up photos all had a bluish quality, and correcting it made the color of the pots wrong.

Anyway, I gave up on it. I like to learn new things but I just had too many pots to shoot to mess around much with it, and anyway I already have a system that works.

Anybody want a free pop up photo tent?
Posted by Lori Watts at 4:01 PM 2 comments