At Last an Art Fair

The last art fair I did was 12 years ago, the now defunct Maine Festival. A few months before that I did the ACC Baltimore wholesale/retail show - the year the city got three feet of snow. It sucked, as you can imagine, and I ate out of vending machines for three days. I didn't swear off art fairs, exactly, but between this, that, and the other thing, I haven't done any since 2003.

Partly I just got spoiled, living in St. Paul, a few hours drive from a score of top-shelf art fairs. It's disheartening to do the same amount of work for the small local festivals and come home with a tenth of the money. And, perhaps most importantly, my van died, and I didn't have the money to replace it.

This summer I've been invited to participate in the Designing Women show in Manchester, about 15 minutes from where I am sitting. The proximity makes it possible: I still just have a compact car - a Kia Optima, if you're wondering. (Okay, you probably weren't wondering.) I can make multiple trips, and I'll almost certainly have to make at least two - one for the display and one for the ware. Or rent a van for the day. Or buy a pick-up! I really want to buy a pick-up - honestly it's harder to be an artist without a truck - but that's probably not in the cards.

Anyway! I need to do a firing for the event - I have some inventory but am trying to create a more unified body of work, for display purposes - so I've been making, making, making, like a mad thing, to fill a kiln for my August 15th firing. But! I still need to build a display! I'd like to build this one, but I probably won't have time for that, so I will most likely either reconstruct my old display or purchase some pre-made folding shelves. I hate those - they look so generic - but I've often been guilty of letting the awesome be the enemy of the serviceable, and thereby missing opportunities.

This morning I need to finish up some wine chillers and sugar bowls, then it's off to class with me.
Posted by Lori Watts at 7:16 AM 1 comments 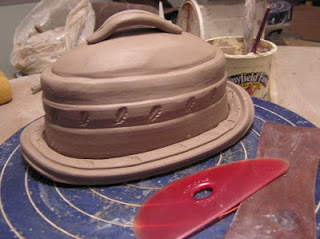 Just got some exciting news: I've been selected to be a demonstrator in the Process Room at the 2016 NCECA conference in Kansas City! The Process Room features artists doing 30-minute demos of building or decorating techniques - if you were in Providence you recall the room was constantly full to overflowing.

I'll be demonstrating the thrown-and-stretched butter dishes I wrote about a few years ago.

If I were in my depressed/cynical mode, I would make note that this is not a paid gig, and that it's surprising to me how many organizations are happy to ask artists to work for free, including organizations of and for artists. (*cough*Ceramics Monthly*cough* ) But hey! I applied knowing it was not paid, save for my NCECA membership, and I am damn glad to be doing it. This might be the ONE time that the exposure really is the important part.

Muddy Waters has more to say on the subject:
Posted by Lori Watts at 12:08 PM 4 comments

Sorry to go dark for so long - several of you have emailed me to see if I'm okay, since my last post was about depression, among other things. Thank you for your kindness. I am okay - wouldn't exactly say I've got my groove back, which is why I can't seem to get a post past the draft stage, but doing alright.

And making pots! I unloaded a kiln on Wednesday. Many pots have already been delivered, but I photographed a few today. I'll post them on the website later & update here with links when that is done: 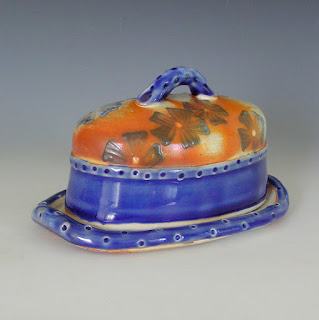 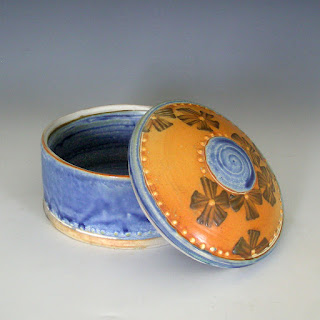 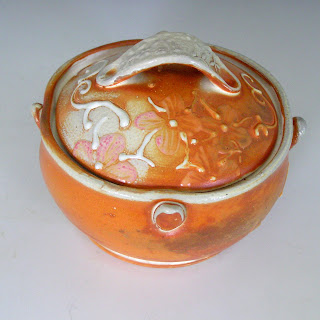 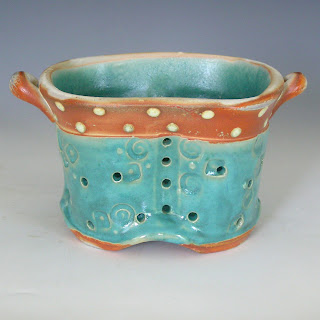 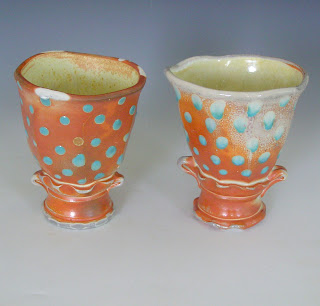 It was one of those firings with a higher than usual number of WOW pots, and a higher than usual number of seconds: warps, cracks, soda-foam-globs. I delivered many of the best ones to Handworks Gallery in Blue Hill, Maine, yesterday. Doug and I made a day of it and visited the reversing falls there, and found the most beautiful starfish!
We don't see starfish much. I mean, we live inland, but I grew up right on the coast, in Scarborough, and I can only remember seeing starfish once, on a trip to Mount Desert Island. I'm told they prefer deep water, and the water at the reversing falls gets very deep at high tide.

I think of starfish being kind of a tan-brown color, but they were amazing jewel tones: amethyst, peach, ruby, charcoal. 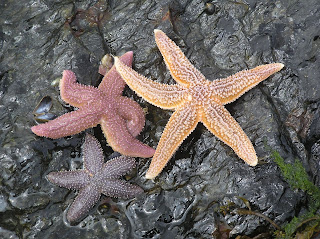