Now that the euphoria of my first truly successful firing has, if not worn off (it may never wear off), at least settled a bit, it's time to review what worked and what didn't in last week's firing. This despite my lingering desire to just dance around in the kiln yard shouting, "Fecit!"

So, without further ado, this firing's Winners & Losers:

Anyblah. Next firing Saturday March 5. Lots to do before then! 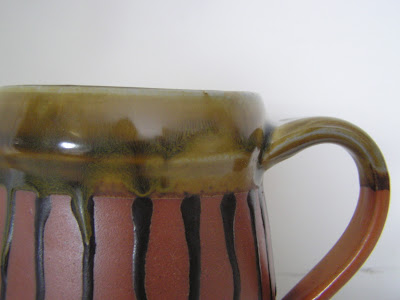 Got some great pots out of the firing! It's definitely the best firing from this kiln (out of all two of them) and possibly my best firing ever. About 20% of the kiln were underfired, but the remaining 80% were all awesome. Not a stinker in the bunch. I am working on getting some posted for purchase (you can see the lot here) and getting the rest sorted for various retail outlets. But here, have a peek: 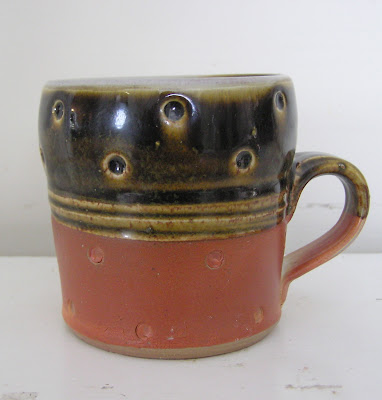 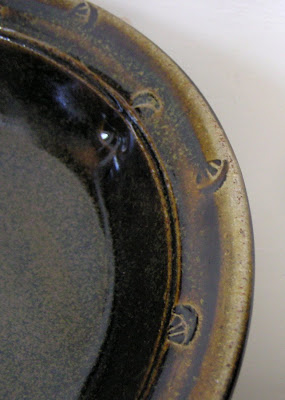 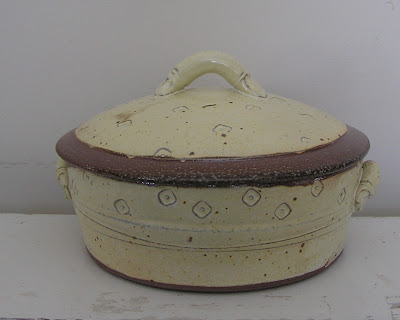 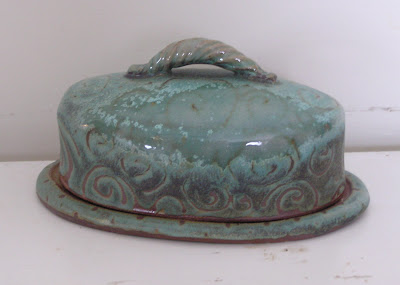 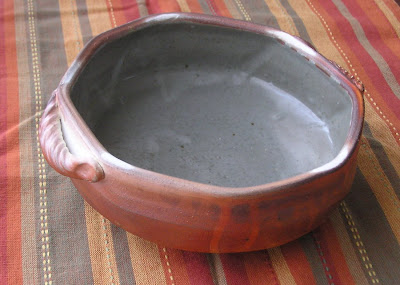 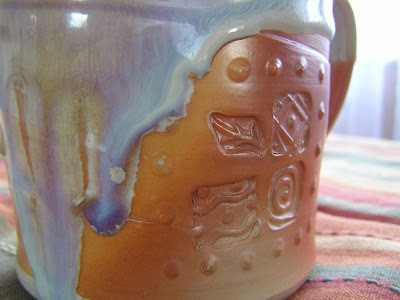 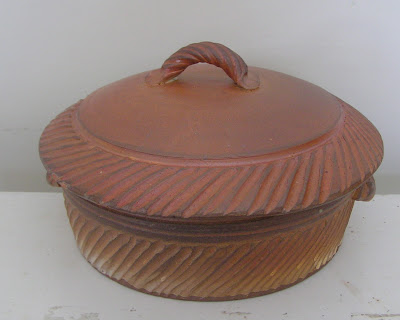 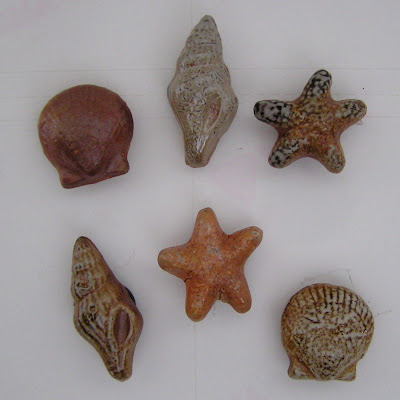 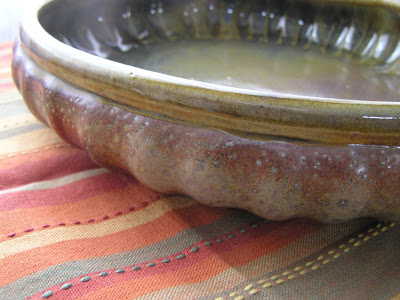 Just posting it here so I don't lose the recipe, like the millions I've written on the backs of envelopes. I'm planning to test this in the next firing.

Speaking of firing, the last was super-duper awesome! haven't had time to shoot photos yet -- will do that tomorrow, if it's sunny.
Posted by Lori Watts at 3:44 PM 0 comments 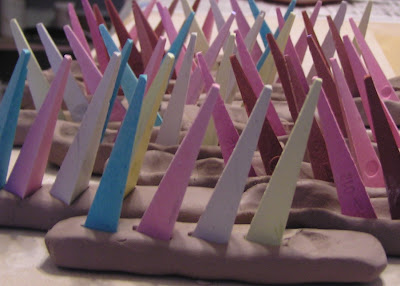 made up a ton of cone packs last night. I had the cones out anyway, so why not do a bunch of them at once? Avoid the whole oops-I-forgot-to-do-the-cones problem that plagues me. Unfortunately they are still a bit wet, but no worries: into the oven with them, at 170º. That'll fix 'em right up, in about ten minutes.
Posted by Lori Watts at 4:24 AM 0 comments

Habits die hard. I tend to do my decorating in the wet state: stamps, rollers, alterations, slip trailing. I had to make a concious effort this time around to leave the surfaces -- at least some of them -- smooth, to allow for more active glazing. In past I tended to just submerge the pot, and chose glazes that have nice pooling and breaking qualities, to work with all the impressed patterns I'd made while the clay was wet.

When I was a student firing atmospherically (salt, then; I knew little about soda. Was anyone firing soda, then? Probably. Just not at Edwardsville) I tended to glaze only the interiors, to let the flame do the work for me. I still like that look, and have used it on many pots that will go into the kiln tomorrow. But the results I am most eager to see are the pots which I covered with patterns, glaze over slip, glaze over glaze, or using latex resist.

I'll be happy if the patterns emerge clearly, but I'll be ecstatic if, on some of them, a big, directional blast of vapor glaze softens or obliterates the pattern on one side, or even just a patch.

Merry Potter and the Secret of the Lost Amber Celadon 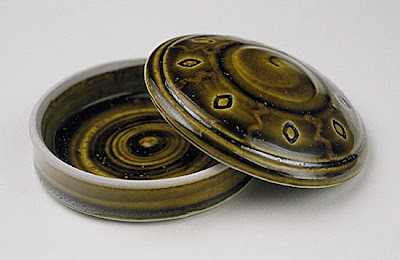 Albany slip, how I miss you!

I have this great recipe out of the Watershed glaze book: the best $25 I ever spent. It goes like this:

I looooved this glaze. In its original form, it's a warm buckwheat honey color, breaking to red where extremely thin. The gem jar pictured above is glazed in Amber Celadon, in its original, Albany-slip form. I tried the commonly recommended substitute for Albany slip, Alberta Slip, but the results were disappointing: a perfectly nice olive color (NOT amber) marred by alot of scumming. In truth I have found Alberta to be an inadequate substitute on other occasions as well. It appears to be noticeably more refractory than Albany, and often creates glazes that, while nice enough, are quite different than the ones they are meant to duplicate. So, boo, too-bad-so-sad, no amber celadon for Lori, right?

My husband the genius had a typically briliant idea. We live in Maine, where we are surrounded by marine clay. It's an fine-particled earthenware, not great as a body clay, although some potters use it. (Doug and I memorably spent our camping honeymoon building tiny, duelling kilns out of available materials -- sand, rocks, stick, clay -- to fire a few pinch pots and figurines we'd made from it.) By itself it makes an extremely runny (at ▴10) slip glaze, dark brown. We decided to try it as a substitute for Albany slip.

Now here's where I run into trouble. We made two versions, the first a one-for-one substitution, the second leaving out the yellow ochre. One of them was exactly perfect, the other was nice, no scumming, but olive rather than amber.

I can't remember for sure which was which. I think the one-for-one was the success, but Doug points out, why would we have tried the second way, if the first was perfect? (Answer: because he is always trying things just for the hell of it. Not that there is anything wrong with that.) Anyway, it's time to find out, once and for all: I have made up a 1000 gram batch of Amber Celadon, using dried & pulverized local clay as a direct substitute for Albany slip clay. If this works, I can see using local clay as a substitute in many recipes; Albany slip problem solved! it's a bit of a hassle, of course, to go collect it, slake it, strain out all the little rocks and sticks and insect bits, then dry and pulverize it; but worth every step if I can regain that yummy look.

Will let you know after Sunday's firing how this works out.

w00t! My new triple beam scale arrived today! Time to mix the glazes! I am not normally a big fan of glaze preparation -- ranks right up there with sales calls in my unfavorite pottery-related activities -- but I can get in a mood for it, and then, watch me go. I know it's time to change up my glazes when I feel no urgency to get the kiln open. That hasn't happened lately, of course, due to the suspense related to how the kiln performed; but a new kiln seems to call for a new glaze vocabulary.

My glaze mixing area is ourside in an ancient shed, because while my studio could be organized more efficently to accomodate it, I didn't really want all the muss and dust in the house. Silicosis and all that, ya know. So it's dark and grim, not to mention cold. But I've got my anticipation to keep me warm.

Has anyone out there in TVlandhave a shino that works well in soda? My efforts along those lines have not gone well, coming out oatmeally and pale. I have one that claims to be for soda & will try it out but would love it if soemone would share one they could vouch for. 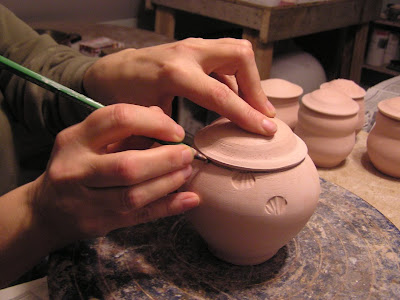 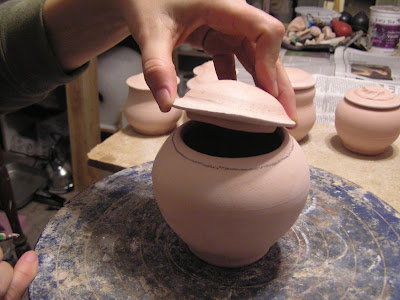 I kind of like waxing night in the studio, even though it's mindless. Or maybe because it's mindless. Just put on the Rovers, belt out "Cockles and Mussels" right along with them, and don't think too hard.

You know what I hate? That big obvious line of unglazed clay that happens when you wax too far down on a lidded jar. I learned to mark with pencil the perimeter of the lid, so I can put wax only where I need it. The glaze can come right up to the line -- after all, it's not gonna run up. The pencil mark just burns away, around 04.
Posted by Lori Watts at 2:52 PM 2 comments

Speaking of which, we're over the hump! Imbolc (Celtic for "Groundhog Day" [okay, not really]) marks the halfway point between the winter solstice and vernal equinox. Party like a pagan! Actually I just celebrated with some Raspberry Zinger tea. 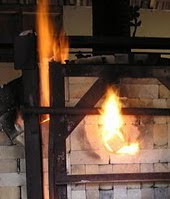 Yet Another Snow Day

See the blue blob, in the upper right? Augusta is right in the middle of the deepest, bluest part right now. And what am I doing? Unloading the bisque kiln! Well, after I shovel it out. Again.

Oh, yeah, there are other things I could be doing. I brought some high-grolleg porcelain home from Portland Pottery, because I got a bit of a yearning to make perfume bottles. But I am anxious to start waxing and glazing -- to get this next soda firing on the road! My eagerness is in part due to how very well the bisque fire went -- shot right up like a rocket. 08 was down six hours from when I finished the candle and started firing in earnest. And, also, I will need to shovel it sometime. Waiting until spring is really not an option.