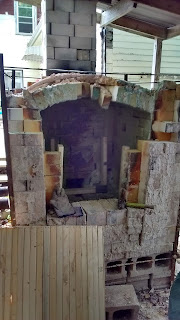 That's what I keep telling myself, but I'm not sure I 100% believe it.  Like a lot of repairs, the kiln has to get worse before it can get better, freaking me out a little bit every step of the way. I had to (of course, but still) remove some of the brick around the doorway in order that the arch form fit in, and though I was pretty careful to stack the brick exactly as they were in the doorway part of me wonders if I will be able to put them back correctly. Half-assedness is so ingrained in my nature that even when I try to be meticulous a fair amount of half-assery slips in.

It's clearer than ever how much the walls have spread. Note to self & all other kiln builders: next time, make holes for two tie rods: when one breaks, the other will hold long enough to replace the broken one. Just think, for the 5 minutes it would have taken to drill 2 additional holes I could have avoided all this work, if not forever, at least for several years. 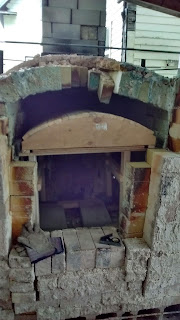 I've now completed the easy part...now to figure out how to jack up the form under the brick. It may be that my plan to support the center, just enough to pop in the missing brick, will need revisiting; possibly there is no way to do this without pushing up the whole arch. Right now the plan is to use a pair of jack posts to hold the form in place while I do the repair. Will let you know how it goes.
Posted by Lori Watts at 11:21 AM 6 comments

My husband & I recently traveled to his home state of Massachusetts. His mother is in the hospital recovering from a fractured femur. While there we visited War Memorial Park in West Bridgewater, where we saw this amazing dry-stacked stone arch bridge. The stones of the central arch are interleaved with the arches on either side, and each relies on the others to buttress its weight. Each span is about 15 feet wide.  Delicate little snowflake that I am, I am groaning about building an arch with bricks cut specifically to fit the form; the builders of this bridge had to make random flat fieldstones fit. I am awed and delighted by the craftsmanship that went into this structure.

These arches have been standing for almost 200 years! Would that my kiln arch were so sturdy. (Yes, I know, apples to oranges, comparing the durability of a barrel arch to a spring arch.)

Speaking of, the baby step I took today on that project was to take down the bag walls, which I had to do with a sledge hammer, they were so thoroughly glazed together. Next I will build a 2x4 frame to place the arch form on; then I will lift the form up with a pair of jackposts to remove the weight of the arch from the walls. Taking down the bag walls was a small step, but the day was not wasted; we devoted most of it to gardening - got our raised beds full of compost, bought some hot pepper seedlings, and watered a new patch of lawn.
Posted by Lori Watts at 1:39 PM 0 comments 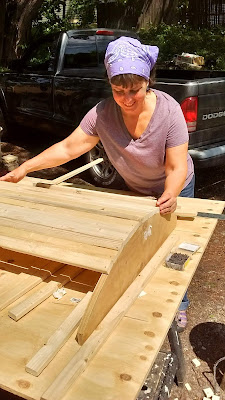 Did I mention I hate kiln building in all its forms? But I do love me some feeling of accomplishment. I've had to break down the task of repairing my arch into extremely tiny baby steps - re-read the chapter, take the measurements, look up the table, buy the plywood, and so on - which is my strategy for dealing with jobs that I dread doing. After enough steps are done the job begins to gain some momentum, and working on it gets easier.

So it is with my arch form! The form is built, and now I need to get some 2 x 4s to prop it up under the remaining bricks of the arch.

Baby steps are all fine and good, but there is some time pressure here - it's almost June & stores are waiting on their summer orders. When I get tired of the whine of the saw & the thunk of the hammer, I retreat to the summer studio to throw. I estimate the repair will be completed by the end of the holiday weekend, and I hope to have enough to fill a bisque shortly after.
Posted by Lori Watts at 11:49 AM 3 comments

Labels: A Day in the Life, Kiln Maintenance, The Kiln Project

My Bricks are Numbered

I build my kiln in 2010; not the first kiln I've ever built, but the first one that I've been the brains of the operation. I love every aspect of making pottery - the wetwork, obvs, that's easy to love, but also glazing and loading and firing. I even love mixing glazes, in a way: the methodical concentration necessary creates almost a meditative state that shuts down the shouting of the world. Somehow I have never come to love kiln building and maintenance! Maybe I just haven't done enough of it. That's what I tell my students when they tell me they don't like pulling handles (and I am right.)

Possibly about to put a few more hours of kiln building experience under my belt. For several weeks I approached my flattened-arch situation by walking out every day & staring at the loose bricks for a while and then going back in the house. Finally I decided to grab a mallet & try to tap the bricks back into place. I didn't actually think it would work - they dropped for a reason - but I knew it would either a) work or b) cause the loose bricks to fall, thus ending the endless indecision over whether I really needed to go through the whole tiresome business of building an arch form. 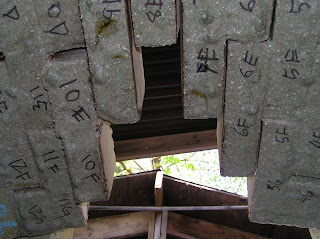 The answer, of course, is yes, yes I do need to go through the whole tiresome business, and at least I have got that clear now so I can begin.

Since I sort of expected this result - that the bricks would fall - I put some scrap insulating foam board inside the kiln, so they would hit the floor and break. As you can see, I have numbered the remaining brick so I can just put them back where they were - they aren't all the same, some are #1 arch brick, some are #2 [insert extremely childish LOL here], and some are straights. I don't want to have to figure it all out again, so I went to work with my trusty sharpie marker.


This job still seems intimidating, despite the helpful numeration, and the fact that I built this arch in the first place, so I need to break it down to baby steps:


So, that's my to-do list for tomorrow! Fun City.

My Devices Fail Me

Hello, friends! Long time no post...not that I didn't want to! My laptop conked out at the least convenient time, just a week before the pottery tour. Not that there is ever a convenient time for such an occurrence.

(In spite of that the tour went well - we had about 60 visitors and a steady stream of sales all day. In asking participating studio for their results, it seems sales varied between less than $100 to over $2000. [Note to participating potters, for future tours: the first one to break 5K can buy me a beer. 😉] I can't point to anything specific to explain the disparity, though I know the top earning studios did do a ton of promotion.)

My laptop failure can be a learning experience for you all, at least! Remember my motto, I screw up so you don't have to?  Well, here's the lesson: don't plug your laptop into a zipcord. I live in an old house, with not enough power outlets. I used an extension cord so I could sit up in bed & read the news or watch Dr Who - or write blog posts! I used the first extension cord I put my hand on, a zip cord - the kind with only the two slots, no space for the ground wire. I also have an adapter to make it possible to plug a three-prong plug into a two-prong hole.

While waiting for my laptop to return from St. Louis, where the Geek Squad sent it to be fixed - I hope it had fun, I love St. Louis, used to live there - I thought I'd buy the cheapest available option as a stopgap. I found a $98 tablet, decided I could use that for a couple of weeks, and then pass it on to Doug, who is still working on an iMac he bought in 2004. So I bought the Smarttab.

Turns out there's a reason why it's the cheapest tablet available...because it is, hmm, how you say?...a piece of shit. It loaded pages so slowly that the connection timed out. I brought it back for a refund the same afternoon. Instead I dug out my old laptop, which at least allowed me to receive & respond to emails, although web browsing was mostly either impossible or too slow and aggravating to be worth it.

My beloved Gray Lady also experienced a minor failure. Well. not so much a failure as one of those expected maintenance issues: brakes & shocks. You know you are going to need to replace brakes & shocks, you just don't know when. Again: just before the pottery tour was a super inconvenient time to be without my truck! Luckily Doug has a friend with an actual lift in his garage, and they did the repairs themselves. No waiting! And, buying parts at the auto parts store cost about a third of what the repair shop will charge you for them, so it was way, way less expensive than it would have been. Crisis averted.

My kiln also has been out of commission for a while due to a flattening arch. For several weeks I have been addressing this by staring at it, trying to decide how to begin or even if I really needed to do anything. Finally, during a slow stretch of the tour weekend, I decide to hit it with a mallet. My thinking was, either I can tap those bricks back into place, or they will fall and definitively answer the question of whether a repair is necessary at this time, or if I can put it off until things get worse.

The bricks fell, of course; but only 6 of them. Well: 3 whole bricks and three halves. So, arch repair it is. I dug out my Olsen and started reviewing the math. This afternoon I with my trusty mallet began removing the castable layer so that I could get to the arch from above. I have two possible plans: Either A) Build a support for the remaining bricks and drop the missing ones back into place, with spacers if necessary, then re-apply a casable layer (this is the minimal plan) or B) Since building the arch support is really the pain in the ass part, if I am doing that much anyway maybe I should just take the whole arch down, straighten the walls, and replace the angle iron frame with a thicker gauge - essentially floor-up rebuild. Or, hell, the floor is in worse shape than the walls, if I am doing that maybe I should replace those brick. Ugh, just thinking about it makes me want to go to bed & pull the covers over me.

Wow, this post got long! I have another machine-failure story to tell you - a tale of three lawn mowers - but perhaps I will save that for another day.