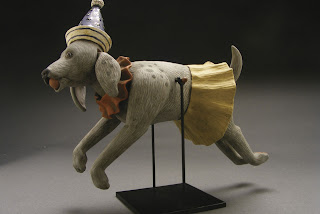 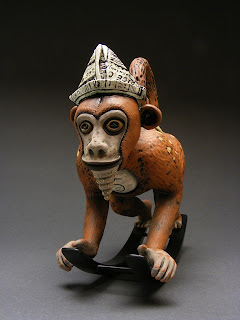 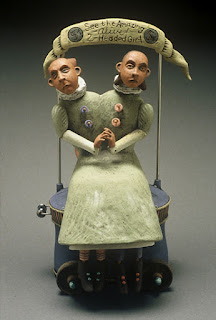 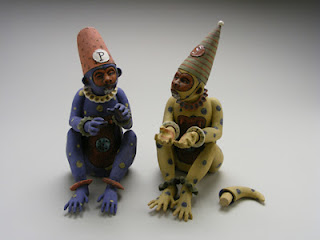 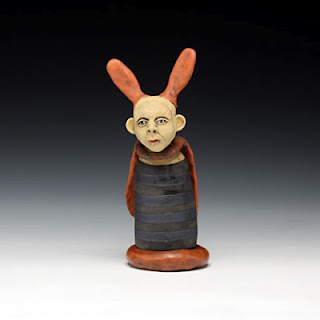 See lots more of Melody's amazing earthenware sculpture here. Is it just me, or these sort of creepily fascinating? 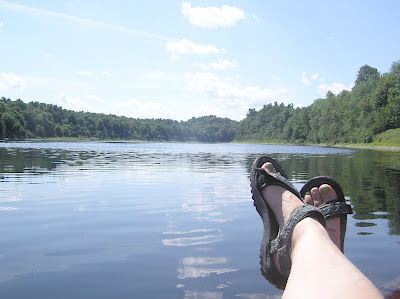 Sometimes I forget that it's okay to relax. I'm not Atlas, holding up the world. I did remember to relax on Wednesday, which was my 48th birthday: Doug and I took a glorious, all-day paddle down the Kennebec, including a stop for skinny-dipping! (Or, you know, chunky-dunking, in my case.)
All day in the sun tuckers a body out! I spent yesterday doing some errands but also doing a fair amount of snoozing. By late afternoon I was recovered enough to start loading the kiln. I'll finish up today and firing tomorrow. Unloading will be on Tuesday!! Watch here for photos.
In unrelated news, Doug has a new book out! It's called Alewife, and is a documentary history of the alewife in Maine and Massachusetts.
Posted by Lori Watts at 11:00 AM 0 comments

Coffee is Good for Everything

Coffee might be the most useful single ingredient in the ceramic process!

I mean, besides clay, of course. Oh and silica, and those other glaze materials. And propane. But coffee is pretty useful: I've saved a bunch of money after a reader suggested putting the grounds in wadding in place of expensive grog. Makes a better wadding, too: softer, so it comes off more easily and is less likely to leave a scar. Since that worked so well, I started putting it in door mud also, reasoning that the air spaces created when the grounds burn away would make a more insulating mix than the straight alumina/ fireclay mix I had been using.

Not to mention my climbing rose. I've been mulching around it with coffee grounds, and it's growing like a mad thing.

It helps get the potter in gear, too.

The only downside is, it stinks. Not at first (and not on the rose), but the next firing, the mix will have a faintly pukey smell. I'm not good at guessing exactly how much wadding or mud I am going to need, and I hate interrupting myself during the loading to go mix wadding, so I tend to overmix. I am loathe to throw any away - still got my World's Cheapest Human trophy - because I can use the leftovers next firing.

The extra wadding can just go into a ziplock, and then into the freezer. The door mud, though...

Last time it smelled bad enough that I really did throw it away. So, new plan! after the last firing, I left the batch of mud uncovered in its bin, so it dried out completely. Today I will add water and try to rework it, and see if the odor was inhibited.

If you haven't guessed, I am gearing up for a firing. I had planned on firing today, but that ain't happening, and tomorrow and Tuesday I have to be in Portland to teach classes, and Wednesday is my birthday, which equals FLOAT TRIP!!! So I guess that means the firing will be on Thursday, unloading Saturday.
Posted by Lori Watts at 4:20 AM 0 comments

What's Happening in the Studio 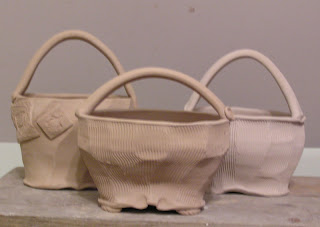 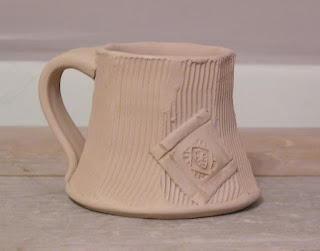 You can see the influence of last week's Thursday Inspiration in these faceted pieces, but as always - I hope - I took the idea and ran in a different direction with it. The first ones I made, above seemed a little...sedate, when what I wanted was wild and fluid, like running water or the flowing marble drapery seen in classic sculpture: 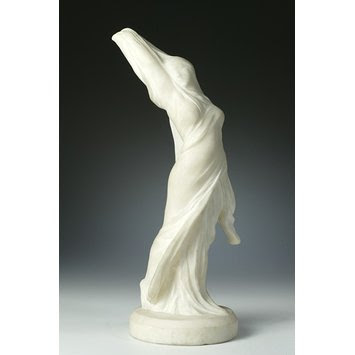 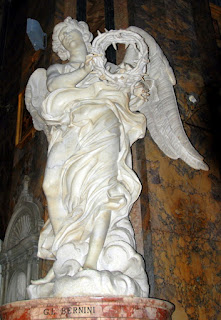 Bernini - Angel with Crown of Thorns

So, for the next batch, I used a wire separated out from a steel cable I bought at the hardware store. It has a slight, irregular undulation that results in a wilder, more organic look: 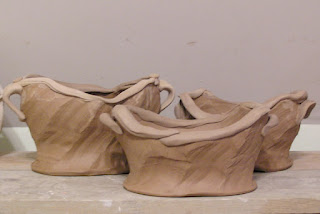 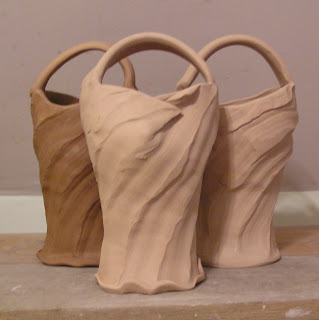 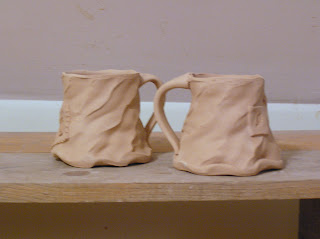 I've also been doing a little handbuilding, in preparation for a class I am teaching at Portland Pottery starting next week. (All of my classes start next week, if you are interested: Handbuilding Monday mornings, Beginning Ceramics Monday nights, Intermediate and Advanced Tuesday afternoons and evenings. Register here, or give Portland Pottery a ring - 207-772-4334.) These were slab built from a template, then embellished: 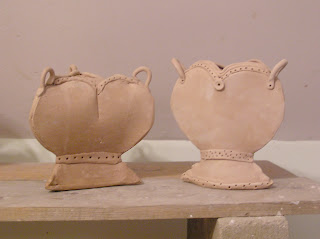 I was going to glaze today, but it's raining - a dreary day to be outside. It might be another wetwork day for me, hooray!
Posted by Lori Watts at 5:14 AM 2 comments 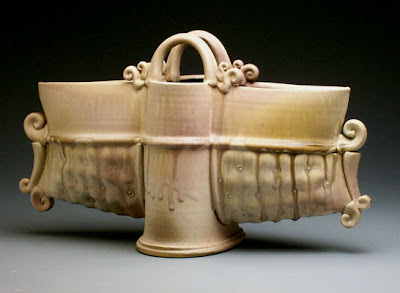 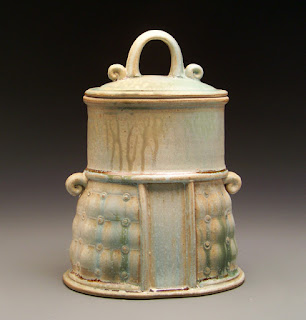 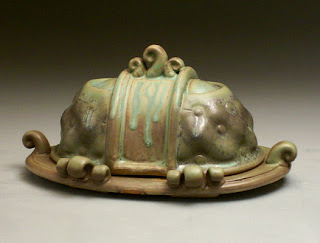 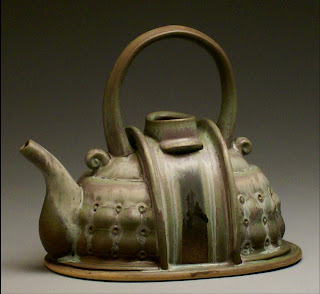 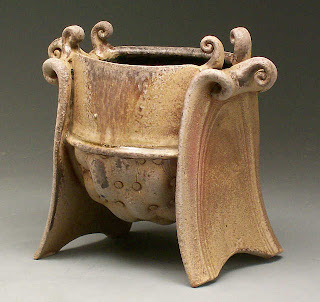 I want to add one last photo, for scale: 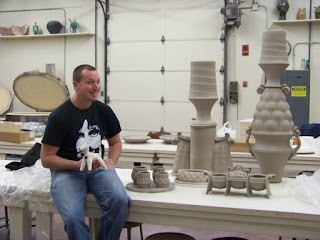 I've represented just one of Jake's several modes of working here; you can see lots more here. Also, check out this great video!
Posted by Lori Watts at 8:16 AM 0 comments

Singing My Life With His Words

A student brought me this song, after my recent automotive difficulties. To be fair, my dear, departed Jimmy actually cost me $1200, and it did last me a year, during which time I made no major repairs at all. By my math, that's $100 a month - a vastly better deal than most car notes. Only difference is at the end of the year, I no longer have a car - sort of like I leased it.

I buy thousand-dollar cars because a thousand dollars is about what I can scrape up on short notice, but I am starting to convince myself they aren't a bad idea, anyway, as long as you can tolerate the risks. I pay my AAA membership every year and keep my fingers crossed.

As it turns out, I have an opportunity to do something novel - for me, anyway. I still have Red Rover, a 13-yr-old Daewoo - who ever heard of a Daewoo? - which, aside from occasional busts of sound, akin to dragging massive chains, seems to be chugging right along. What if I - wait for it!! - saved some money every month, against the day that Red Rover fails me? It almost seems sacrilegious: isn't that just begging for some financial misfortune to consume any monies thus set aside? As long as I have no savings, the universe seems content to slap me with mere mechanical failures. Who knows what might happen if the furies were to see me getting ahead?

A Tale of Two Lidded Jars 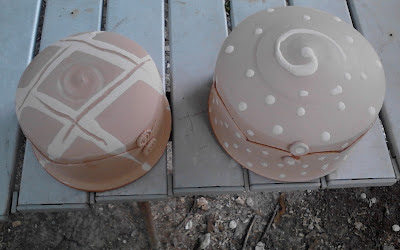 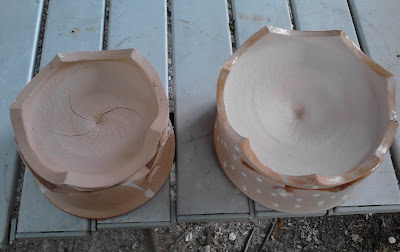 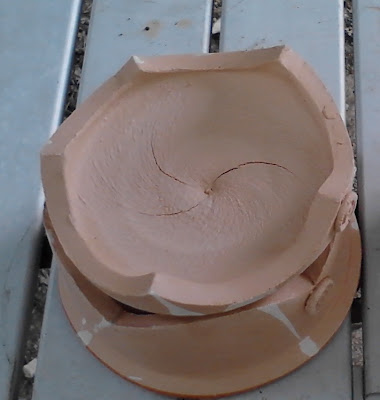 I unloaded a bisque today, including several of these single-piece lidded jars, that are thrown as closed cylinders, then cut. One of them cracked in a pinwheel pattern. They always do when I forget one step, but let my error be your learning opportunity!

To prevent these sorts of cracks, after I cut the top off ("and after it's leatherhard...!" interjects Captain Obvious), I turn the lid upside down and trim out a small circle in the middle right where the dimple of the joining occurs. It may be the the trimming compresses the clay just enough, or perhaps it removes little microscopic cracks before they can turn into big ones; what I do know it that the failure rate without that step is pretty much 100%, and trimming stops pretty much all of it.
Posted by Lori Watts at 12:30 PM 7 comments

You know about the Square, right? I wish I never heard of the fugging thing, to tell you the truth. Every since I heard of this clever little device that allows you to accept credit cards anywhere - or anywhere you get cell phone reception - nothing would do but that I get one. And I did! They're free. But they are useless without a cell phone, and not just any cell phone: it has to be one of the smartypants phones, running on Android or iOS operating systems. And those ain't cheap, but they just got cheaper.  Now you can buy a Smartphone at Best Buy for $99, without a contract.

But wait, it's more!

It's advertised as a $99 smartphone. But you go to Best Buy - or at least all the Best Buys in Maine and New Hampshire - and they don't have one. They do, however, have much more expensive phones that you could buy, while you are there...or they have much cheaper phones, for which you have to sign a two year contract. But those $99 phones? Nup. Don't carry those. Hmmm. That smells funny.

I can be pretty pigheaded, and I don't much like being manipulated, so I kept on keeping on, and found that you can purchase one of these elusive phones online. You have to purchase minutes, of course. (Which then expire, and you have to re-purchase them, if you don't use them - why can't they just stay bought?) But, fine, whatever, throw in some minutes, then.

So I get this phone, which I paid extra to get in a hurry (moron that later...)but when it arrived: too bad, so sad, you didn't purchase the unlimited card! You know, the one that adds 50% to the price of the phone, and which no one has mentioned until just this minute?

I didn't mind purchasing the minutes, but the card is bullshit. The card is just a way to make you pay more than the price the phone is advertised at.

I'm so irritated I have half a mind to bring it back. But then, will I be looking fretfully at my lonely little Square tomorrow? Will I just turn around and do this again next month, when I take another stab at bring my wares to First Friday? (Yeah, that fell through, again, and again it was due to car issues. So I am a cranky Lori all around. )

Look, I know $150 is a good price for a smartphone. But why couldn't they have just honestly indicated what the true cost of the phone was? Maybe I would have balked. Probably I would have bought one. Either way the bait-and-switch crap is just dishonest.

Eh. I'll sleep on it and decide in the morning. 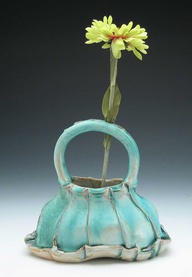 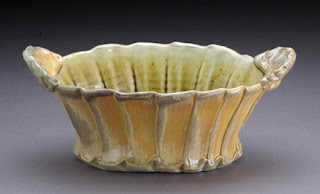 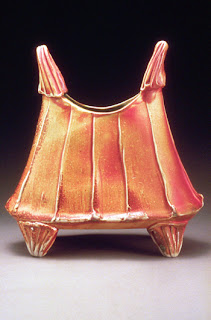 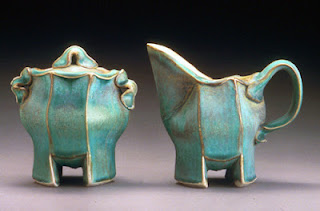 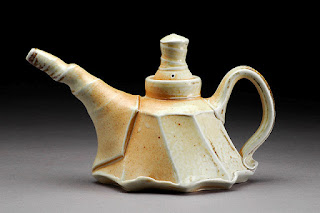 See lots more of Gertrude's soda-fired (after mine own heart!) ware here.