More Pots from the Last Firing 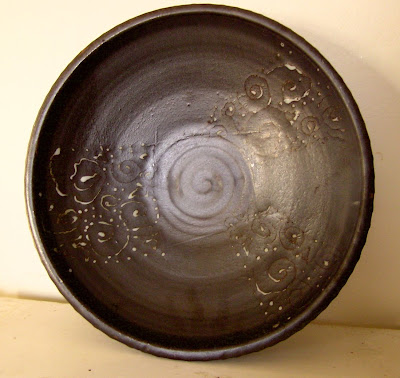 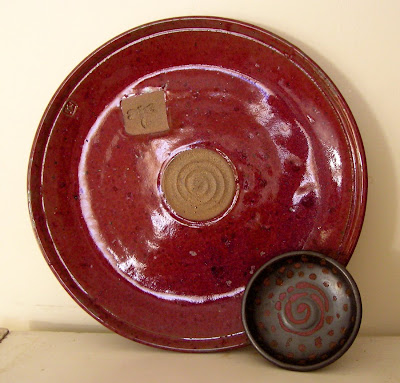 I was too lazy to do the whole photo set up, when I just wanted to record a couple of pieces before I (ahem) sell them. The top bowl is the one I shot unfired two posts ago; as you can see, it looked better prior to firing! Oh, well, sometimes that happens. I like to tell my students, "If you aren't failing, you aren't trying."
I am pleased with the large red platter, and the little test cat dish, too. 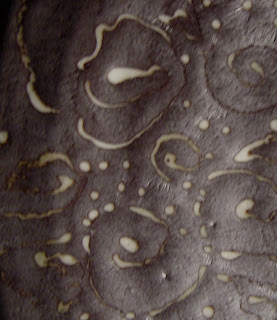 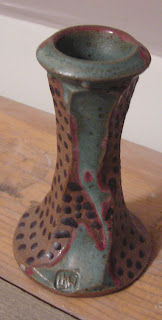 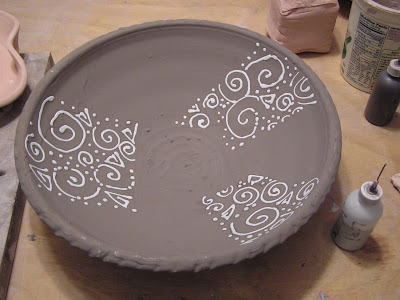 Our Lady of Sorrows

It's pretty obvious why I can never get my list finished. Here's what I've got going on today:

4) 1 hour Home Blessing (a term I got from FlyLady.net; what normal people call housecleaning.)

and, last but definitely not least:

8) Our Lady of Sorrows, a performance art event tonight at 7 pm at the Harlow Gallery My friend Malley Weber, of Hallowell Clayworks is one of the creators of this event. Perfect ending to a busy day.

I've sort of soured on Etsy (more on that later.) I know some people do very well there, but for me it has turned out to be a ton of work for s few small sales, amd I've decided if I am going to be promoting my bum off it might as well be my own site I am promoting. Also, while there are TONS of good artists on Etsy, and there are an especial lot of fine potters, the site is starting to take on a cutesy sort of aesthetic which just is not me.  And it's fair to say that there are an equal number of poorly executed works there. Don't even try to suggest that the site might benefit from jurying, in the Etsy forums; people there value the openness, even at the cost of a reputation for some pretty bad art.

But I had to laugh when someone directed me to Regretsy. It's mean, and some of the works posted there are not deserving of ridicule. (For example, I rather like the silk rag necklace, and might purchase it myself if I had that kind of money.) But it's funny, too, and on the grounds that any publicity is good publicity, I thought I'd pass on the link.It's better if you don't read the captions and just look at the works. 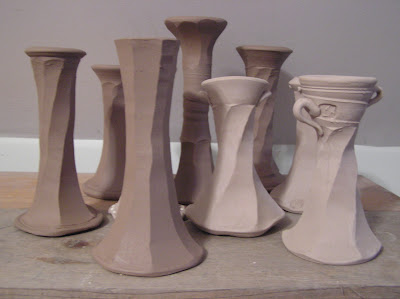 Does anyone use bud vases anymore? It's just my luck that I love to make stuff like bud vases and tea bowls that nobody uses. Although I have had some luck re-branding tea bowls as bourbon cups. Tells ya something. I wouldn't touch bourbon myself, not with a pole. (Not big on tea, either; I just like the forms.)

Anyway. Nice relaxing day in the studio, making small stuff and listening to Lyle Lovett. Nothing new on the kiln front; I've been too worried about layoffs at the office gig to spend any money on anything not strictly and immediately necessary. The recession may be technically over but we are a long way from out of the woods.

On the upside, it seems people are still enjoying affordable luxuries like pottery. Maybe even bud vases!

Remember how I ranted about Zapplication, which all of the art fairs and other juried art events now use, instead of slides? Okay, that was pre-blog, but trust me, I did rant. I ranted that we already had a perfectly good system, so-simple-a-child-can-do-it, just get your pieces shot, stick the slides in an envelope, write a check (of course - but that is a separate rant), and you're done. When Zapp came along, I hated it because it was, I felt, dauntingly complicated, and I am no technophobe. Images had to be EXACTLY 1920 x 1920 pixels, which meant photographing them for that format, or having them look like crap by forcing them into it. It also meant, for me, having to have my work re-shot at a much denser setting, and, since I don't own Photoshop, only the image manipulation software that came with my computer, it meant paying additionally to have the image re-sized.  I was irritated because, although the system was easier for show management and for jurors, this ease was accomplished on the backs of artists, who are not known for their technological acumen. I didn't even have a computer at the time. (I still know lots of artists who do not have a computer.) The transition to Zapp was the last straw for me at a time when my life was in transition and doing artfairs was on the table with all the other life changes. It got cut.

Well, Zapp has changed, and so have I, a little bit. In the first place, it turns out that no one is making slide projectors anymore, which means that when these last shuffle off this mortal coil, that's it. So it's a good thing most shows have made the transition. And, importantly, Zapp has dropped the requirement that the image be exactly 1920 x1920 pixels. The new guidelines state that the image must be at least this dimension, on the longer side. I can do that!

The only reason I know this is because I took a little jaunt over to Zapp to see if my account was still valid. No special reason. Well, except I was sort of visioning what my life might look like after I get my kiln rebuilt, and can (hopefully) make more inventory. Art fairs again? Maybe. In any case the application process will no longer be what stands in my way.