...then visit on Saturday morning to watch the unload! I am mildly nervous about this - I occasionally have crap firings, and it would NOT be fun to have an audience for the unveiling of one. But, you know, that's part of the process...and what I htink is crap might be perceived differently by visitors.

Come visit during the tour! To learn more, click here: mainepotterytour.org; or to download a map of the Central leg of the tour, click here. For a Google map you can follow on your phone, click here.
Posted by Lori Watts at 8:10 AM 0 comments

...for the Pottery Tour, of course, but also almost time for another Cat Dish Fundraiser! Together, last year we were able to sponsor the adoption fees of three shelter cats, and all found their forever homes!
The dishes for the next round of kitty-saving are in the kiln right now! I always have fun glazing these because they are low-consequence: I can try anything I want, I can't lose money I wasn't going to make anyway! Here's how they looked before I loaded them: 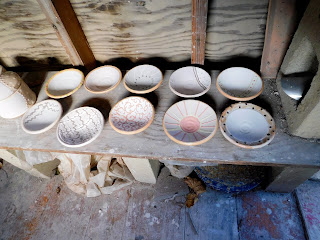 This load will fire on Wednesday, unloading Saturday morning at 10 am, during the pottery tour! hope to see you there.
Posted by Lori Watts at 2:31 PM 0 comments

An excellent idea that was totally always part of the plan and not at all forced by timing! 😉 Either way, stop by the studio at 10 AM Saturday! I will be unloading a firing. You can help, or just get first dibs.

Or, download a map of the Central Region and visit all 12 Central Maine stops!
Posted by Lori Watts at 6:22 AM 2 comments

A Pinker Shade of Pale

With just over a week left before the Maine Pottery Tour, I am scrambling to get a firing cycle completed. It's a nice problem to have - I thought i had plenty of inventory, but sales over the winter were better than expected, so I need to squeezed out enough to fill the shelves. Today I have two classes to teach, so I may not get much studio work done; Friday & Saturday promise to be glazing marathons, in order to fire on Sunday. If that doesn't happen, I may quite accidentally be including a kiln opening as a tour event on Saturday morning! that wouldn't be the worst thing, although, given how disappointing my last firing was, it's a bit of a roll of the dice - I wouldn't want an audience for the unveiling of a crap firing.

On the other hand, people DO love an unloading! And it's not like i have no pots, I'd just like more, to give the shelves that compelling sense of abundance that makes people want to take some home with them.

Probably my best plan is to shoot for firing Sunday, then, if need be, I can push it back.

One of the many things I love about the clay community - our community - is the enormous generosity of my fellow potters. When we learn something, we don't hoard it; we are excited to share with others. Case in point: my student Karen Carpenter recently demonstrated for the class a technique she learned from another potter, to make an evenly textured surface on a curved vertical vase.

The roller she uses here is from MKM Tools.


^^LOL if anyone does this for *this* post I'm gonna have to buy Karen a coffee!
Posted by Lori Watts at 10:06 AM 0 comments

Labels: Other Artists, People who are way smarter than me, Tutorial, video

Above is a Google map of the 37 stops on the Maine Pottery Tour, plus a couple of lunch & shopping suggestions (AKA sponsors.) You can send this map to your phone - or so I'm told - or if you are old-school like me, you can download maps of the legs of the tour you want to visit at these links:

Hope to see you then!
Posted by Lori Watts at 9:36 AM 0 comments 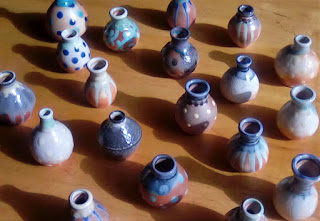 Do you have a magic twanger? I do. Something in my brain that just lights up under certain stimuli. It sounds like I'm talking about a sex thing, but I'm not - my magic twanger responds to aesthetic cues. Like, making these minis! Like a lot of artists, I spend some time thinking about why I make what I make. Not why I make stuff - the inherent satisfaction explains that well enough - but why I make the specific things I make, in the specific way. The magic twanger provides a clue.

The minis give me a feeling of abundance, a sense of thriving. There are so many, all different, all the same! A healthy lilac in bloom will give me the same feeling: so much, so much bounty! Actually lots of the metaphors that come to mind are garden-related: a tomato plant heavy with fruit, bees trundling over blossoms. Teeming life.

Reading that, the word that comes to mind is "fecundity," so maybe it is a sex thing after all. 😄
Posted by Lori Watts at 6:30 AM 2 comments

Published in "Atmospheric Glazes" by Lisa York, in the Dec 2015 issue of Ceramics Monthly.

Do not apply thick or it may shiver or become runny.
Posted by Lori Watts at 2:32 PM 0 comments

New Pots in the 2nds Shop! 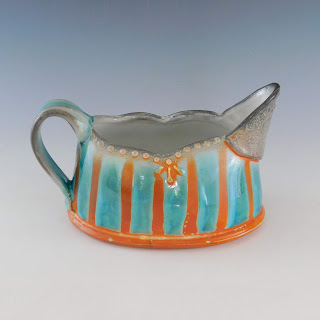 Two tiny tiny rough spots on the interior are what renders this gravy boat - otherwise my favorite piece from the firing! - a 2nd. Not enough to compromise the function, mind you! Juuuuust enough of a flaw to put it over the line. Silver lining? Somebody out there will get a great bargain, and this pot will serve its useful purpose in the world. 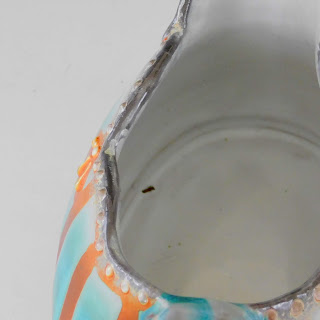 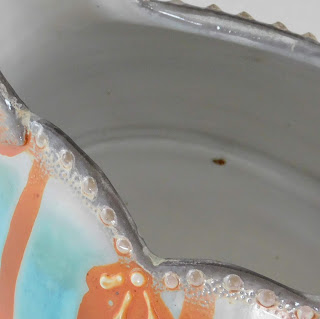 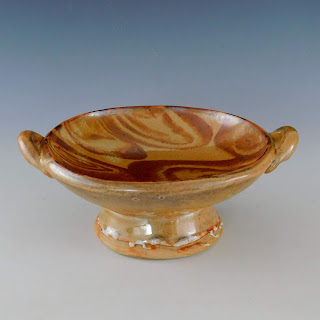 This pot doesn't actually have a flaw - just a demo that doesn't really belong anywhere. I was demonstrating a couple of things - the spiral pattern on the inside is a pattern of dark clay inlaid in white. The resulting slab was placed over a hump mold, so my beginners could see that process. Got lucky with the Malcolm Davis Shino - the Mad Dog, as my friend Peg likes to call it - like you sometimes do with that glaze and its wonderful carbon-trapping properties.
It's about 6 inches wide. Check it out here! 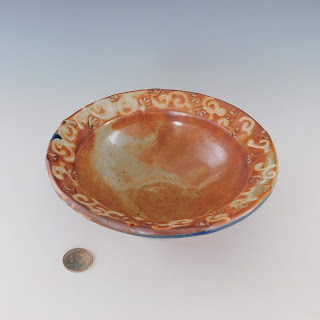 Nothing wrong with this pot either! It was a throwing demo, which I then used to demonstrate stamping & slip trailing. Just a basic workhorse shino on this one; pretty nice all the same. It's also about 6" wide, destined to be somebody's go-to bowl for cereal, soup, mac 'n'cheese, even ice cream.
Maybe you? Check it out here. 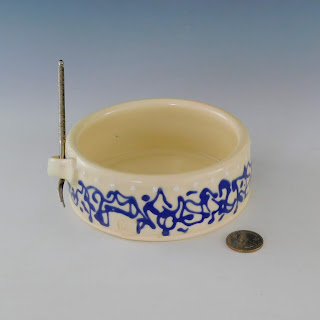 I used this pot as a glaze demo when the little loop on the side proved to be too small for the pate knives I bought for that purpose. That'll teach me: Always do the math! This little pickle fork fits just fine, though, so this pot has found a new purpose in life: it's a pickle dish! Do you need a pickle dish?
Posted by Lori Watts at 2:53 PM 0 comments 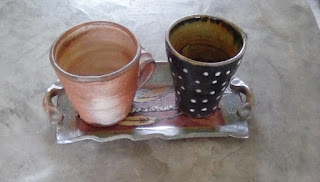 As usual I wanted to buy allllll the pots & alllll the tools. As usual I kept my spending in pretty close check. I came home with three new pots. (These photo are distinctly half-assed! Just wanted to something posted. 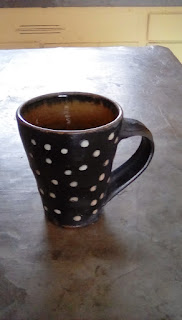 A Willem Gebben mug to replace one my husband Doug (aka "Buster") broke years ago... 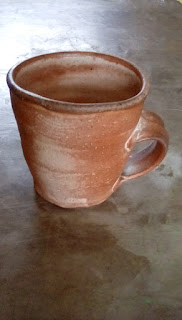 A Linda Christiansen mug, DITTO. (Buster has been forbidden to use these. We have dozens of mugs, most of which are seconds of mine! Break those, instead, Buster!) 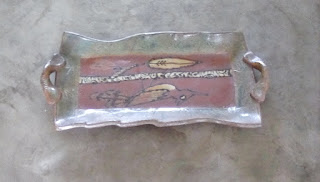 And a lovely little tray made by my dear friend Mary Jo Schmith of Front Avenue Pottery and Tile. 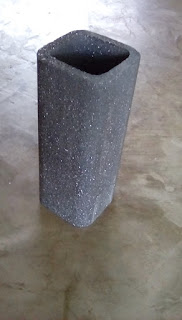 As for tools, I got myself an unglamorous shelf grinder, made of the same material my Advancer kiln shelves are made of. I do most of my shelf clean up with an angle grinder, but it's awkward for edges, and sometimes I just need a quick spiffy-up, and it's a pain to drag out the power tool & extension cord when a little scrub from an abrasive tool will do. I've had the one with the red plastic handles before, but they cost as much as a diamond cup for the grinder & really don't last long. We'll see how this performs.

What did I almost buy, you ask?
I was pretty interested in the Slab Mats. I meant to order some new kiln shelves while I was there but it didn't happen. 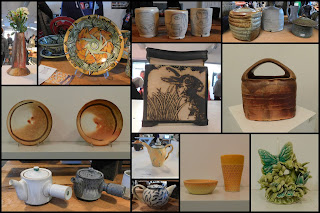 But, as they say, the real NCECA loot is the friends we see along the way! (Oh, what's that? Nobody says that? Well, they do now.) I spent time with dear friends I only see at NCECA, and others I haven't seen since I moved away from Minnesota in 2001. (Poverty is a rough bitch on friendships!)

Next year is Richmond, Virgina; after that, Cleveland (I think?) Will I make it to those? Hard tellin not knowin, as we say in Maine.
Posted by Lori Watts at 7:21 AM 0 comments