Ugh, I don't know about this:


The Great British Pottery Throw Down is part of a new season of BBC Two season programmes announced on Tuesday.

Made by the team behind The Great British Bake Off, the six-part series aims to find pottery's hottest stars.....the channel hopes The Great British Pottery Throw Down will repeat the success of The Great British Bake Off, which migrated to BBC One.
Cox will be joined by Keith Brymer-Jones and Kate Malone - two of the UK's pottery scene's most renowned potters.
Each week, the 10 contestants will create a "Main Make", wherein the potters hope to translate a slab of clay into glazed glory, culminating in the reveal straight from the kiln.
Those whose clay creations fail to impress will leave the studio until the final, when one person proves themselves to be master of the wheel.
Cox said: "Clay, mess, passionate potters and the team behind Bake Off. What's not to love?
"There's something really raw and exciting about grabbing a lump of clay and creating something unique out of it."

"Pottery's hottest stars." LOL ALL DAY.
I'm not a big reality TV fan in any case. I think it's degrading, boring, and often fake. I hate that it turns everything into a competition, and am not excited to see my passion represented in it. I mean, think of ten fine potters you know. Could you possibly choose a best one? Based on one work, that was made under a time constraint?
Still, silver lining: at least people meeting us for the first time will have some reference other than "Ghost."

I made some plates back in February, using a mixture of red underglaze and porcelain slip. I promised to post the finished results, and lo, here they are: 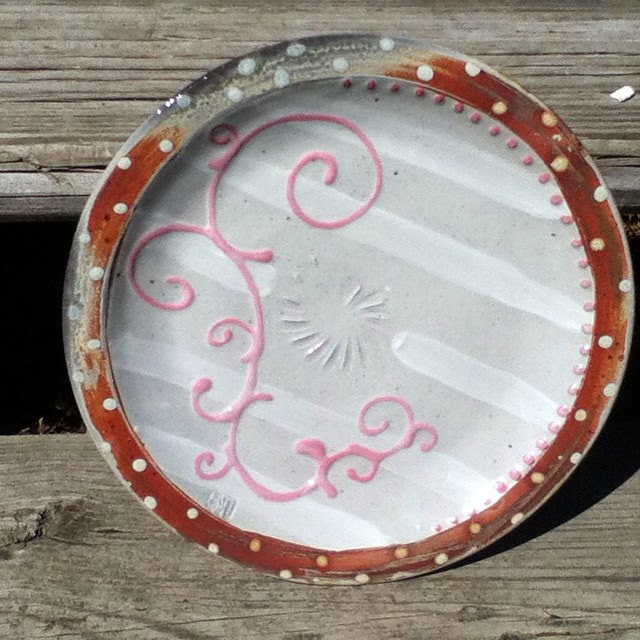 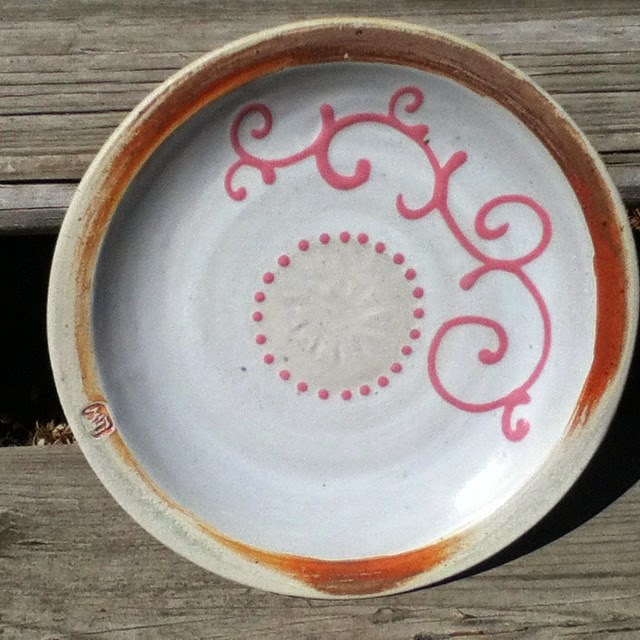 The claybody was less grey than I expected, but that PINK! Can't complain about that bright cinnamon pink.

Run With It - My Attempts at Monoprinting 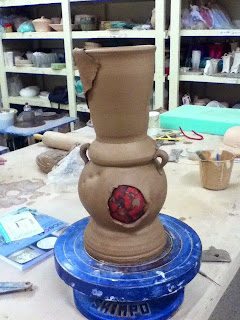 I tried out Chris Dufala's monoprint technique last night in class. (I have a long standing tradition of trying things for the first time in class. Hilarity ensues! Sometimes.) Chris has a detailed step-by-step at this link, which is way more helpful than my fumbles might be, so I'll just briefly describe what I did:
My images only partially transferred, giving them a deteriorating, peeling-wallpaper kind of look. 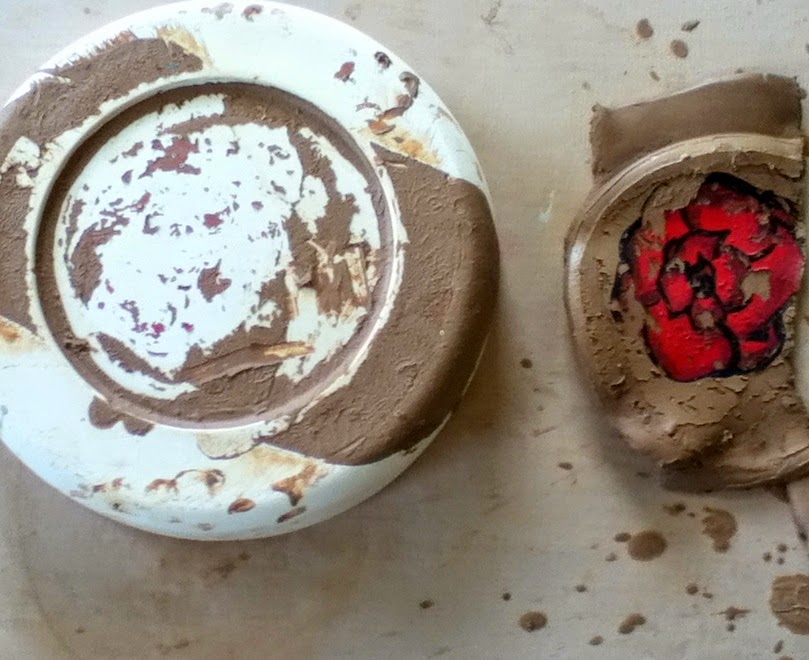 You all know how I love the Law of Entropy! Deteriorating patterns & images are what makes my world go 'round.  So I loved the little slab images too much to throw them away but they weren't big enough to make something out of themselves, so....Throw a pot to use them on!

This is what I love about going to NCECA, and workshops generally: when you can take someone else's technique, and use it to make your own work stronger. It's nothing like copying - what I make couldn't be further from what Chris makes, and the uses I hope to put this to are completely different from what he is doing. 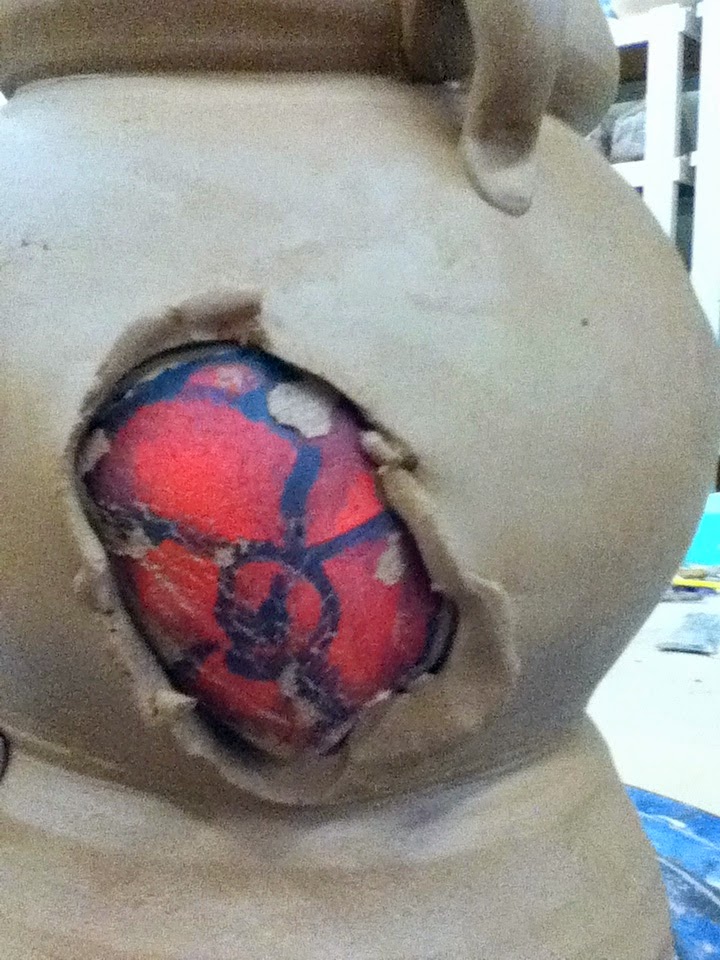 Though this was an off-the-cuff pot, I can see this in future "real" work (as opposed to demos.) Maybe not with the tear-throughs...maybe cut windows, looking through at a peeling floral pattern.

Whatever it ends up being, you'll see it here first!
Posted by Lori Watts at 8:09 AM 0 comments

Some people are eating ham today. Some people are dyeing eggs. Some went to church. Me, I made flyers and postcards.
That's right - pottery tour stuff again. There's an incredible amount of little fiddly work that needs to be done, to make it all come out right. But who am I kidding? I get a great deal of satisfaction in making it all come out right.
Check out the postcards! 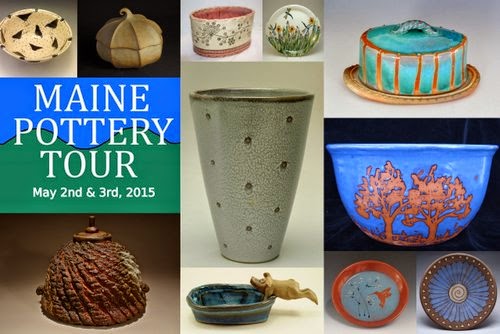 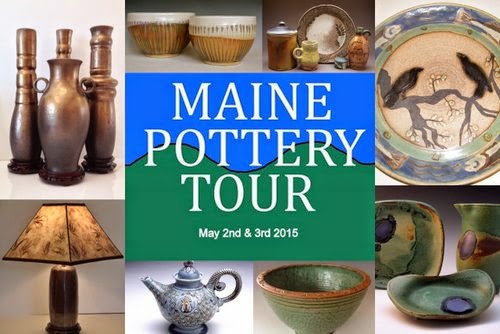 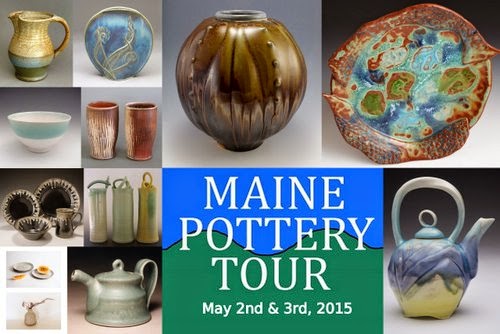 There are three, one each for each leg of the tour. The backs will list the participating studios with their addresses. I ordered them from Next Day Flyer last year and that worked out pretty well, so will probably do that again.

This isn't usually my schtick; missing deadlines is more my thing - but I happen to be aware of a handful of shows you all might be interested in:

That's it, that's what I got. If you like being reminded f entry deadlines, you don't want to count on me - but check out Carole Epp' Musing About Mud - that's kind of the go-to for stuff like this. Ceramic Arts Daily also has a Call for Entries page, but it's fairs and festivals and gallery exhibitions and some rinky-dink stuff, all mashed together.

Yikes! Is it too late to do this? It's a week now since I returned from Providence, and I hit the ground running, getting ready for Mug Season, the Maine Pottery Tour, and of course firing and delivering work.

Here's a quick highlight reel:
Wednesday was the gallery day. The bus tour was...spotty. The shows (the ones I saw!) were great, but there was one that the bus couldn't get to (WAT??) one where nobody was home, one that had an additional cost to get into (yes, I am the world's cheapest human. But after paying for the conference, and then paying additionally for the bus tour - didn't that used to be included?? - I was cranky about being asked to pay an entrance fee for a show. So I didn't.)
I took a boatload of photos on the gallery day, with my little iThing; you can see them here. (I was going to post them all here but time just does not allow.) My most favoritest piece that I saw all week was the giant wall of porcelain panties at Brown University. 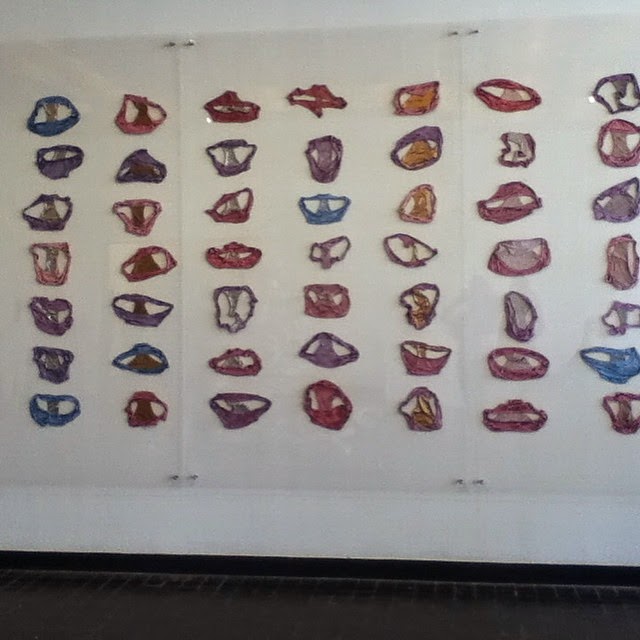 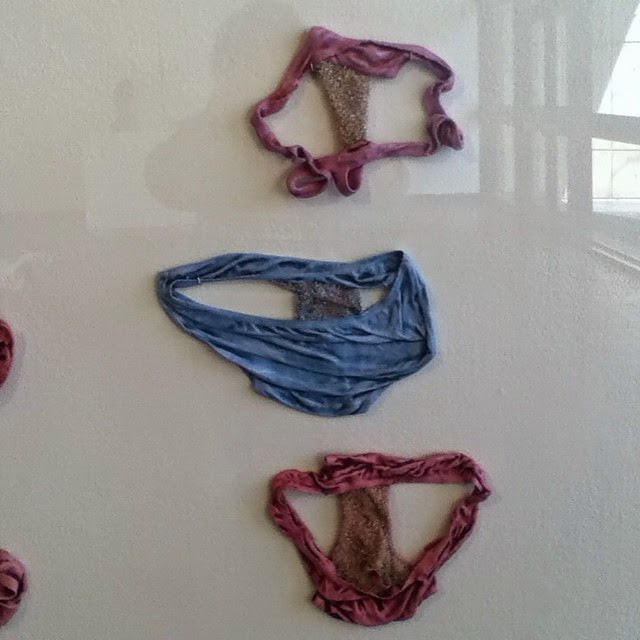 Misty Gamble is the artist. The panties are cast porcelain with added beads and rhinestones. Hilarious and masterfully done. The subject matter of her work - not just panties, but femininity - mirrors some of my interests back when I was sculpting, and maybe even now.

Frederick Douglas Opie gave a non-traditional keynote, about the role of ceramics in Incan, Mayan, and Columbian cultures. Opie, a professor at Babson College, is more a food guy than a clay guy, and the address was like a college lecture. Some people didn't enjoy the departure, but me, I'm always up to learn something new. I think, too, the point about ceramics being a marker of status made people uncomfortable. We want to think we like what we like because that's what we like, but in fact the possession of handmade claywork - the more esoteric the better - marks us as people who have the education and sophistication to appreciate it, and the disposable income to purchase it. Yeah. Uncomfortable. Sounds like snobbery, among people who think of themselves as the very earth of the earth. But status is what makes us humans go 'round, and every human culture has had status markers. Doesn't mean your preferences are fake - quite the opposite, your preferences (and mine) and the status they denote are very real, and you will have markers of some status - high, low, or in-between -  no matter what.

It's an interesting thing to think about, but a discussion for another day.

Though I spent most of my time watching demos - they are why I go to NCECA - there were some good discussions as well. Here are the ones I would have gone to, if I weren't busy ogling pots in the gallery expo, where the largest collection of inspiring functional pots could be found.
My fellow travellers attended discussions of injury treatment & prevention in the ceramists' hands; ceramics in psychiatric healing, and clay and community in the St. Croix valley.

I was in New Bedford, at an opening featuring former staff, residents, and Salad Days artists from Watershed on Thursday evening, but had I not been, would surely have attended the Pottery Slam: Claystories - and maybe even told a story myself. I am shy in crowds but put me at the front of the room, and I can fly with it. Strange but true.

And now: the demos. SO AMAZING, so inspiring.
There was much more, but I am realizing it's just too much to type up this morning, so going to wrap up the wrap up. It is extremely unlikely that I will be in Kansas City next year - unless a money-anvil drops out of the sky - but if you are there, enjoy!