Last week I was soliciting names for my new wholesale line. This week I have one! I got lots of good suggestions, but nothing that rang the bell until one of my students came up with "Dotopia." SO, Dotopia it is!
I had my first sales meeting for this line yesterday. It went - well, not swimmingly, as I didn't come away with any order, but the buyer was very excited about the work, just not in a time frame to order right now. Was also a little hesitant about the $400 minimum order. I thought that was standard? But it's been several years since I have pursued wholesale in a formal way, as opposed to here-are-some-pots, do-you-want-them? I don't have a minimum in that case, because these are established accounts, and the pots are already made.

Potters out there who wholesale: you have a minimum order, right? How much do you ask?

If you own or buy for a store, and you think you might like to carry this work, here's the spec (HAHA get it spec/speck? as in dots!! I slay me 😂)...anyway the spec sheet for Dotopia!
Posted by Lori Watts at 5:42 AM 1 comments

Dot Cottage or Something

I told you I had a good firing, right? But I don't think I mentioned that in that good firing were the first pots of my new line!
UGH A LINE, right? Sounds so...production-y. I'm a studio potter! But I do produce things. I've got this idea that I can straddle the, er, line, and using a simplified design scheme, create a body of work in which the items are more or less reproduceable. Soda firing guarantees that each pot will be one of a kind, anyway. 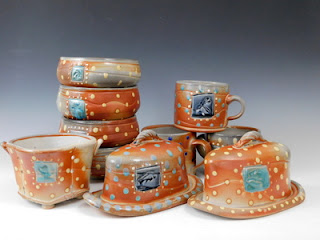 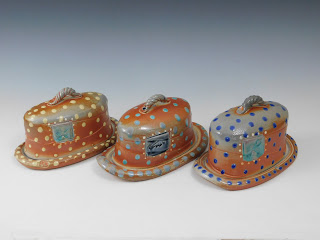 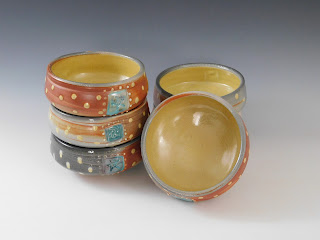 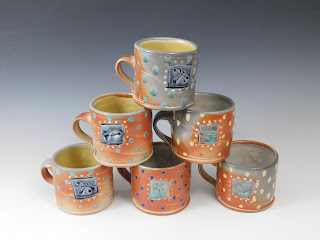 I haven't settled on a name for my new line...I'm thinking Dot Cottage, for the pattern & the color scheme, but am open to suggestions!
Posted by Lori Watts at 3:12 PM 4 comments

3 Days in the Studio

Way back when this blog was new, I used to post almost every day, although the posts were not all particularly useful or profound. Sometimes I just typed out my to-do list.

This was before I knew anyone was reading - the internet can feel like shouting into a void, and that's not always bad! Like singing in the shower, writing without an audience is freeing in that it doesn't matter if your posts are good or not! To push through this inertia (which I am hoping is not the leading edge of depression!) I am going to post my to-do lists again for a while.

So, 3 days in the studio: yesterday, today, & tomorrow:


There's lots more I could be doing - photographing pots! posting items to the online shop! replenishing low glazes! - but overwhelming myself with tasks seems, lately at least, to be a recipe for none of them getting done. I've got some household stuff to do, too, so if I can complete this list + that one, I will pat myself on the back and allow myself to be happy.
Posted by Lori Watts at 7:20 AM 2 comments

How's your October? I've got a new Mug! 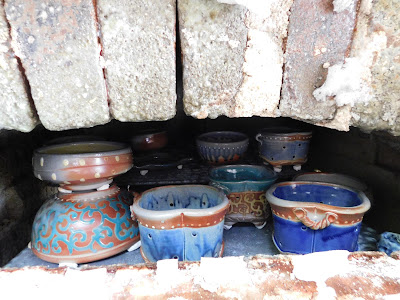 I've had sort of a bumpy fall, for no good reason - just have been in a holding pattern for a few weeks now, able to make myself do the tasks necessary to keep the lights on & the pets fed but not much more than that. You may have noticed the dearth of posts! Recently I've been overwhelmed trying to do even stuff like respond to emails or [shudder] phone calls. Could be upset over events in the national arena, could be the leading edge of a depressive episode - I'm not sure. Depression is something I struggle with periodically, as regular readers know.

I received a little boost on Tuesday, though, when I unloaded a really great firing! While soda usually generates more seconds than your standard stoneware firing, only two out of maybe 60 pots were unacceptable from this firing. I was pleased by the even-but-not-too-even soda distribution - just uneven enough to create a handsome directional effect, just a little silver kiss, on most of the ware. 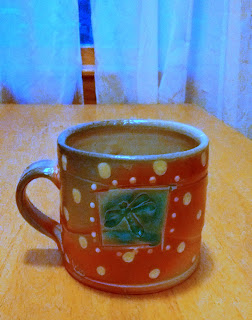 We (that's the royal "we!") have a little tradition here at Fine Mess Pottery: we (snicker! 😉) choose one mug from the lot, and use it for a few weeks, until the next firing, after which we wash it well & stick a price tag on it! I find it helps me identify the functional strengths & weaknesses on my work...and it's fun. If you ever start making pots that you are not drawn to use, change it up. You aren't making good pots.

Sometimes it only takes a little boost to break a down spiral. Here's hoping! I am pedaling my FitDesk right now (exercise has been shown to be helpful in staving off depression!), using my temporary new mug, and planning my day.

Hope your October is going well.
Posted by Lori Watts at 4:34 AM 5 comments