Because my propane-fired kiln is outside, I am often asked how I can fire in the winter. Doesn't the cold prevent the kiln from heating up? Internally I chuckle at these inquiries. The difference betweencomfortable and uncomfortable, for people, is less than 100 degrees, and the first 100 degrees are the easiest for the kiln to achieve. I'm regretting those chuckles now, because, at -5°, the winter cold does in fact make s difference. Not to the ability of the flame to heat the kiln; that's still a negligible effect. The problem is getting enough propane to the burners to burn! Propane's phase shift from liquid to gas is -44°. It's stored as a liquid by keeping it under great pressure. When some of the pressure is relieved by opening the valve, some of the propane turns to gas and escapes out the valve, down the pipe and to the burner, where it (hopefully!) is burned to create heat for the kiln. This phase change - from liquid to gas - is endothermic, meaning it consumes heat energy to happen.

The closer the external temperature is to the liquid-point (there's some chemistry term for that, can't think of it right now) of propane, the less pressure is required to keep it in a liquid state. The tank loses pressure as it empties anyway, and the endothermic phase shift makes the tank even colder than the air around it.

If the air around the tank is -9°, as it was when I got up this morning, I would still be able to grill a steak using my propane tanks. The firing, however, takes hours - 11 hours even if everything goes perfectly. The tank is getting colder and losing pressure the whole time. The burners wouldn't stop burning, but it would be as if I were turning the valves down, down, down.

I might be able to finish the firing... I do have completely full tanks, which matters (pressure!). But it's possible that I will attempt to do the firing and just burn a bunch of propane and stall out before I reach temp.

Also - not that this affects my plans! - loading in the sub-zero suh-hu-huhuhucks. The my hands hurt, the wadding keeps freezing, the wax on the bottoms is brittle and flakes off.

So, firing this week is a big ol' nope. Instead, let's enjoy some Sonny Boy Williamson!

For weeks now I have been both excited and stressed about the upcoming ACC Baltimore Wholesale Show. So much to do: Define the wholesale line! Take photos, create forms, plan a production schedule. Build a booth! (What space will I use to build it? To store it afterwards?) Will it fit in the Grey Lady? No? Okay, check out trailers. Where will I stay?

I'd already paid the $400 upfront they ask you for, to hold your space. When the contract arrived, I put off reading it in detail, the way you do when you are stressed about something. (On the plus side, I tend to do lots of other things in the process of procrastinating. I got a lot done!) The first thing I noticed were the FEES. Some I expected: of course I'd have to pay for pipe* and drape or carpeting, if I was going to need it. (I wouldn't, because it's $256 to rent a 10x10 square of carpet. I didn't even bother to find out how much the pipe & drape was) But mother of dog: WIFI? It's $135 to access WIFI?? Before I had even finished reading the contract, the expenses were looking like this:

I know some of these are requirements of the hall, but that doesn't actually matter to me: what matters is a show that I could barely afford to do before got pushed into the prohibitive range by a bunch of hidden costs. If these expense were stated upfront, as the booth fee was, I would never have applied.  Nor are these expenses stated anywhere all in one place - I really had to go looking for them. I admit I side-eye the organization a bit, about this: making it hard to know what the real costs are until after the deposit is paid, surely results in more forfeited deposits. Hey-hey-hey, money for nothing, right, ACC?

And - icing on the cake - I asked for my booth not to be on the perimeter. Guess where they put me? If you guessed on the perimeter, you win! That wouldn't have been enough to cancel,but it was enough for make me feel a little dubious, even before the additional expenses.

Man I am bummed about this. I've lost my $400 deposit - of course - but also what I had hoped was a way to really grow my business. And it seems I never finish learning how much I have to learn. 🙁

I know there is a bright side here - hey, now I can relax and enjoy the remainder of my break, and just make pots - and I will focus on it shortly. I just need a minute to process my disappointment.

Oh hey, Happy Festivus! Perfect: it's the airing of grievances!

*When I first typed this, I typo'd it to "pope and drape." Like, no wonder it's spendy! His time is valuable. 😀
Posted by Lori Watts at 8:01 AM 0 comments

My last show for the year, the Portland Pottery Holiday Show & Sale, finished up over the weekend. It was a world of fun - for me anyway! - and I think sales were pretty good although I won't know for sure until early January. Sales are always important, but for me that show is more about celebrating and connecting with my community, and marking another year still standing. I always overdress for it, and this year was no exception. 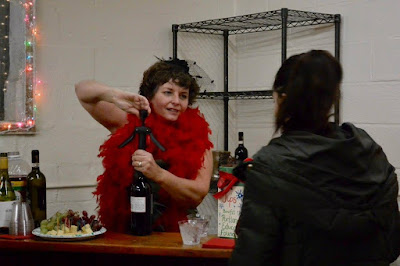 That was fun but now it's done, and I am on to my next firing, which must happen soon as it will hold an order due the last week in December. Today is expected to be above freezing, which is good news for me as I have shelves to scrape & other work to do to prepare the kiln for a bisque.

As I mentioned before, my mind has already leapt ahead to shows and events in 2018. My to-do list for the rest of December, and into January, looks like this: 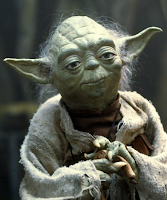 I feel like I am repeating myself, maybe because these thoughts are chasing each other around in my brain! If Yoda were here, he'd say, "All her life has she looked away…to the future, to the horizon. Never her mind on where she was. Hmm? What she was doing.” Maybe I'll make a New Year's Resolution to be more mindful in the present moment. (Is that ironic? I am making future plans to resolve to live in the moment more. 😃)

Well, those shelves are not going to grind themselves.
Posted by Lori Watts at 5:39 AM 0 comments 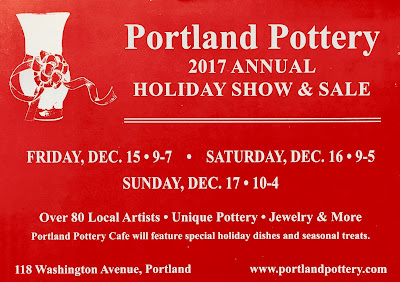 More than 90 potters and other artisans will be showing work at the annual Portland Pottery Holiday Show & Sale. If you're in Maine I hope you'll stop by! The "official" dates of the sale are the 15th, 16th, and 17th...but I'm gonna let you in on a little secret: there's an opening night party, with food, wine, and music on Thursday the 14th. You can find me at the bar, pouring drinks and singing snippets of Christmas songs.

To my right (wait...your right, my left..I guess) is my good friend Mary Frances, a potter-turned-lawyer (who even knew that could happen?) I don't see enough of her these days, but hopefully we will be laughing until the wine comes out our noses Thursday night.

Even if you can't make the party, the sale is worth a look-see - it's a good chance to discover new favorite potters, and re-discover us oldies.

Happiest of holiday seasons to you & yours!
Posted by Lori Watts at 5:11 AM 0 comments