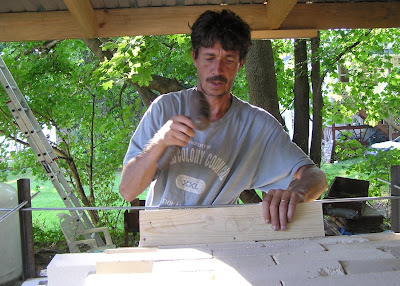 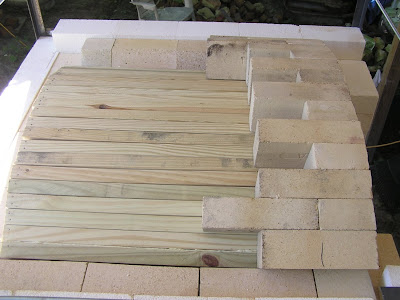 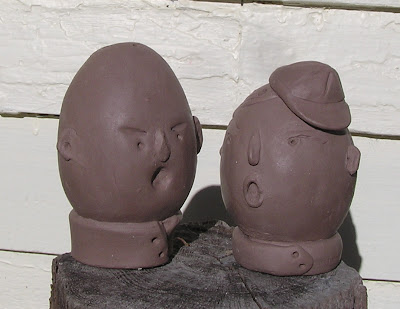 These s & P shakers will be in the first bisque, tentatively scheduled for September 5th, and then in the first soda firing, Sept. 10, unloading the 12th.
Posted by Lori Watts at 5:30 AM 2 comments


Since the Great Welder Meltdown that happened Independence Day Weekend, I have been dithering about how to get the welding done. Well: not just dithering. The plumbing; the stack; the arch form; I worked around the problem for as long as I could, and tried to work up my courage to call Augusta Tool Rental. Everyone kept telling me welding was easy, I'd be able to figure it out no problem. Still, I was intimidated, so I put it off and put it off.

Last week a friend of ours was visiting, an elderly gentleman of Ivy League background. I showed him the progress I had made on the kiln and explained the obstacle: welding the frame. I told him I was thinking of just renting the equipment and figuring it out myself, at which he shook his head: "No, no, my dear. That's for the other folks."

There was no use explaining to Bob that I have always endeavored to be one of those other folks, the ones who know how to do things, and anyway I realized that as wrong-headed and snobbish as the comment sounds, he was right in an essential point: there are people for whom 16 two-inch welds of iron bits would be nothing, no more difficult than throwing a board of mugs is for me. I knew welders existed, of course, but that was when the lightbulb went on that it makes no sense to struggle and dither when I could just get it done, in an hour. It's okay to have help.

I so wish I had a camera! The arch form is complete, and it is such aa appealing object, itself.

I had one false start, when I decided I was very very clever and would avoid the tedious assemblage of slats by using a length of flexible hardboard bent over the form. Yeah, don't do that. The board is not THAT flexible, and tacking it down was almost impossible -- it kept pulling nails loose, and the flat sides weren't flat. Oh, for my camera! The result would have been funny instead of murderously frustrating if I had known I could share it.

Anyway the form is complete. Hopefully I will be able to get some shots of it before its duty is done.

Canoeing today, if the rain stops!
Posted by Lori Watts at 3:02 AM 2 comments

How Things Stack Up!

Obstacles, obligations, and temperatures in the nineties conspired to make July a bust for kiln-building. No lie, the entire month was inchwise. And our camera went bye-bye, so you'll have to take my word  that it's August now and I am back on track. On the downside, I am bailing on a family vacation (well, half of it) to get there. I feel like a bugturd about it, but I was just so frustrated with everything taking priority: work, family, classes, vet appointments, gallery-sitting, everything.  All important stuff, to be sure, and most of it not optional, but at some point I had to declare that the kiln is important, too; otherwise it just won't happen. (See: Housepainting, three-quarters finished. )

Technically I got back on track yesterday, the very last day of July. I started building the stack finally, and while there is, predictably, some half-assery going on, I made good progress. Is it a bad thing if my tolerance for half-assery rises geometrically as this project wears on? I've reached the damper, for which I need a lintel brick that I don't have (natch), so I am going to build the arch form today, instead, and head to INFAB tomorrow. I need some more arch brick anyway.

I was surprised to discover that INFAB doesn't sell skewbacks, so my choices are 3: have them shipped from Sheffield, MA (although, surely, now that I think on it, there must be another supplier of refractories closer than that: I can't believe that no one in the entire Boston metro needs kiln brick); make them out of castable (cheap and doable, but one more step in a project with too many steps already); or have INFAB cut them out of straights. So I guess I've got some phone calls to make, about pricing. I only need about 8, so how much can it be?

Anyway. It looks cool and dry today, a perfect day to build an arch form. Feeling only slightly guilty, I will wave my family goodbye and get moving!