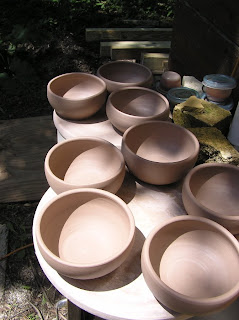 Because I was anxious about re-injuring my shoulder, I stuck with very small bowls to start with. These were a pound and a half -- about the upper limit of what I can center with one hand; ribbing and pulling up seemed safe enough activities for both. I was overly cautious, I think: a few days later, in class, I demonstrated with 4 1/2 pounds, with no ill effects. I also loaded a bisque, only to discover that a thermocouple was shot, and that I am out, so I had to put off the firing until the new one arrives. Yes, I could have duct-taped the valve open, but again, I am more cautious than I used to be.  On a tangent, why in the Sam Hill does it cost $8 to ship a thermocouple? You could almost just stick it in a #10 envelope with a first class stamp. Highway robbery. 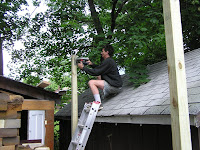 Work is progressing on the kiln shelter, although not much of my work, I admit. I sketched it out and got the materials, but Doug has done almost all of the construction. That's probably for the best, as, watching him, I am astounded at how much more careful he is than I would be that things are level, at precise right angles, etc. I have a "whatever, good-enough" attitude about such things with the result that my projects, while perfectly servicable, often have a half-assed look about them. When it comes time to build the new kiln (hopefully next summer...Anyone have a line on used superduty brick, anywhere near Maine?) I will have to make an effort to emulate him.

Here's What I've Been Doing Instead of Making Pots 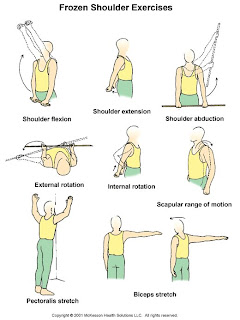 Since early spring I've had some soreness and loss of range of motion in both shoulders. I thought that they were improving -- my right definitely was. And then one day I woke up almost completely unable to move my left arm from the shoulder at all. At least, not without howling in pain. Turns out I have adhesive capsulitis, or frozen shoulder.

Until this happened, I would not have guessed how hugely inconvenient it would be. After all, I've still got one good arm, right? Well, practically everything I want to do is almost impossible one-handed. Okay, that's an overstatement. I don't have much trouble cooking, for example, or driving. But: getting dressed, working in the garden, making pots...even reading is much more difficult. I've postponed the firing I had hoped to do this week; I don't even have a good guess as to when I might reschedule. My shoulder is light years better than it was, but it is still drastically limited, and I am very afraid of re-injuring, further slowing a recovery that my doc says will take months as it is. So I do my exercises faithfully, and am ever so careful.

So, anyblah: I might try throwing tomorrow, just some small things. On the up side, work has begun (Doug's work, that is: building goes on the long list of things I can't do right now) on the kiln shelter! And a nice day is finally on tap for tomorrow.