Holy cow this is taking forever. At this rate I'll be lucky to have pots before Thanksgiving. Got a world of greenware, though.
Posted by Lori Watts at 9:01 AM 0 comments 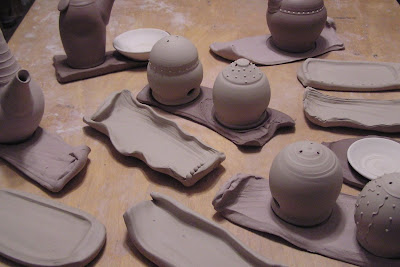 No, wait, that means "very trays," which makes no sense. But "Beaucoup  Trays" doesn't sound as good, and "Many Trays," dumber still. So, let's go with A Whole Bunch of Trays.

I like sets. Not necessarily matching sets, as in bowls or mugs, but dissimilar objects that are meant to go together. I've been making olive oil bottles, with handbuilt drip trays, which led to soy-and-wasabi sets, and S & P sets, and oil & vinegar sets, all with trays, of course.

When I got done with those, I started on a butter dish jag. Not my usual thrown/assembled covered butter dishes; I wasn't in the mood for that much commitment. So I made a few butter trays (for the cat-free home, as they lack covers) inspired by my student Holly Johnson of Hurricane Mountain Pottery. Holly brought a couple of very simple handbuilt trays to class, and I had to try out the design. 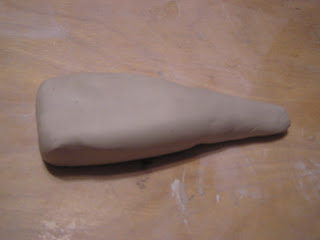 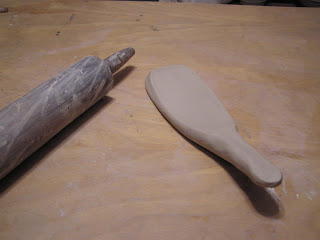 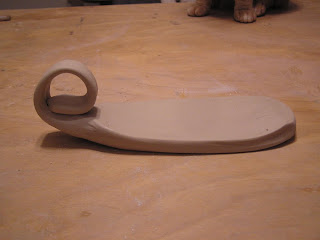 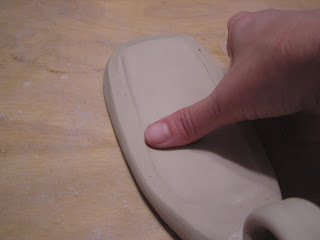 Notice the little cat feet in the third photo. Happy Jack is quite enthralled with my studio work; if he had opposable thumbs, he'd be my apprentice.

Unsurprisingly, to me at least, my results are quite different from Holly's; her trays are slimmer and more elegant, mine more meaty. I am making for the soda firing (please God, someday soon!) and have been working on foregoing much of the wet surface decoration to allow for the the action of the flame. I do find that different artists using the same techniques will nevertheless have markedly different results.

After a bit, I decided I was after something even simpler: 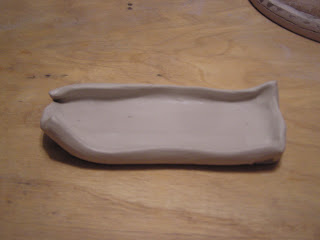 This one is just a fat tossed slab with the sides and corners pressed up. I am looking for a good turquoise Oribe glaze for soda, that I can brush into the interior, to make a nice contrast with the peachiness of the soda vapor glaze. Any suggestions?
Posted by Lori Watts at 5:13 AM 0 comments 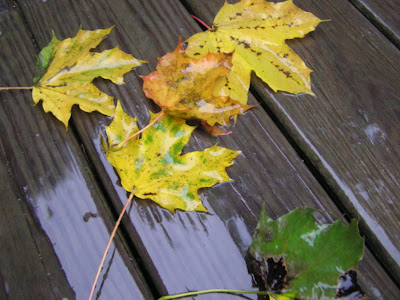 Doug & I finally brought my wheel up from the summer studio. I am always excited to bring it out, every spring, but having it inside is kind of inspiring, too. Also inspiring: I am running out of pots, and I have several requests from stores to bring more. I may have to do one more firing at Watershed.

The door blocks are taking an unbelievably long time to dry - they are still flexible! And one split, because I didn't properly unstick it from the board it was resting on. Once the blocks are successfully finished, I will post about that process; there is very little on the Web about how it's done, so this is an opportunity for me to provide a real resource. Part of my intention in blogging the kiln-building was to make similar projects seem less intimidating to anyone out there in TV-land who was considering it: if I can do it, and eff up along the way, and eventually get it right, well, it looks like anyone could.

I should, of course, have cast the door blocks first, or at least as soon as I knew the final dimensions of the door, but I often back into projects, doing the parts I know how to do first; otherwise my not-knowing may become an obstacle to ever getting started. The way to begin is to begin.

It's a crap day in central Maine, cold and rainy: perfect for sitting in my warm dry studio, throwing pots. Turn, turn, turn.