...Not another learning experience!

Actually I am exaggerating. we got some very nice pots out of the firing. Also some stinkers, at least I did. Hubby seems to lead a charmed life in that regard. Here are a few pots just after unloading: 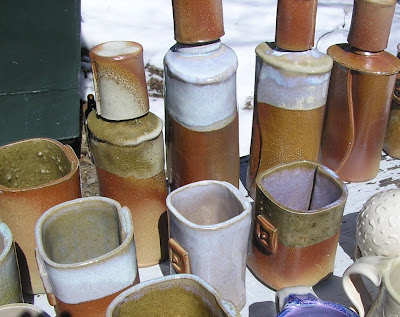 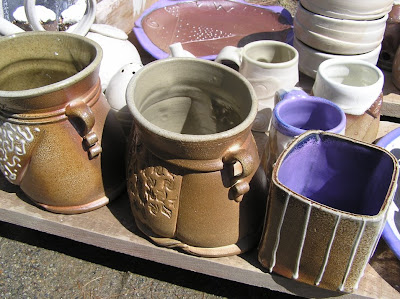 My pots. I am very pleased with the toasty brown pieces in the foreground -- it's the pasty white ones farther back that were disappointing. I was hoping for a fleshy salmon pink. That's where the learning experience comes in: I won't be using that clay body naked again. I'll have some better pics of individual pots later, the good, the bad, and the ugly.
Posted by Lori Watts at 3:07 PM 5 comments

Up Next: Soda Firing! 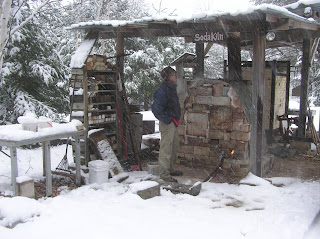 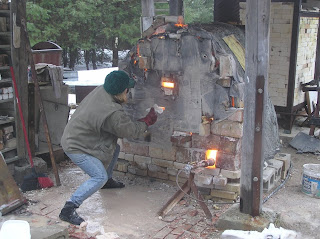 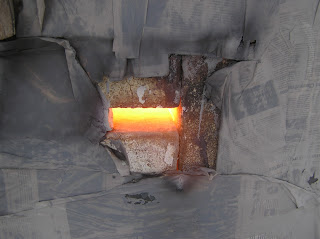 I spent Wednesday waxing, glazing, and mixing wadding and soda salad (moron that later!) for the soda firing. Wadding is used to prevent ware from sticking to kiln furniture, and is used in salt, soda, and wood fired kilns. I use a pretty standard recipe:

I wax the bottoms of the pots, because the wadding sticks to wax better than to bisqued clay. This works best when I am loading each piece immediately after wadding. When circumstances have required wadding ahead of time, such as for an enormous kiln load, or for a large-group firing, it's better not to wax, and instead to use a little dab of Elmer's glue to keep the wads in place.
It should be noted here that I haven't fired a salt kiln since graduate school -- I ain't saying how many years ago that was -- and I haven't done a soda firing, except as a workshop participant, ever. So I had a lot to be nervous about, and there were a lot of mistakes waiting to be made. Let me tell you about one, and I hope it is the worst one: 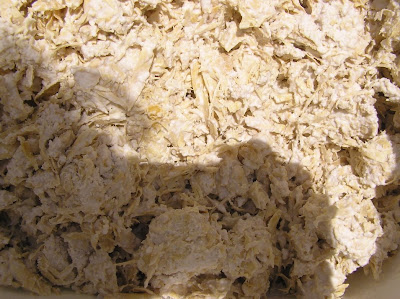 I had some doubts about how to introduce the soda. I've seen it sprayed into the kiln, but that seems like a lot of rigamarole and equipment; I'd heard of people making "burritos" out of soda ash and wet newspaper, and that seemed like a good way to end up with a lot of dry spots in the kiln. (Dry spots being places where the vapor didn't reach, which thus got little or no glaze. What I wished for was a way to introduce soda the way I used to do salt: Place it along the length of an angle iron, stick the iron into the port, and dump the material into the flame. I found it, finally, on Emily Murphy's page. Emily recommends mixing soda ash, bicarbonate of soda, and calcium carbonate with wood chips and water to make a paste the consistency of tuna salad, and the spreading that on an angle iron to insert into the kiln. What she didn't say, but I should have known, was not to add the water until shortly before using the mixture. I mixed it all up on Wednesday, and by Friday it was a concretized mass. The soda undergoes a chemical reaction with the water turning it into hard crystals that I had to break up with a big scale weight I found lying around. That stuff stings the skin, too!

Another unexpected element was a late season snowstorm. Actually, firing in the snow is not that bad. What really stinks in loading in the snow. Unloading is Sunday -- or Saturday night if I just can't wait.
Posted by Lori Watts at 3:51 PM 3 comments 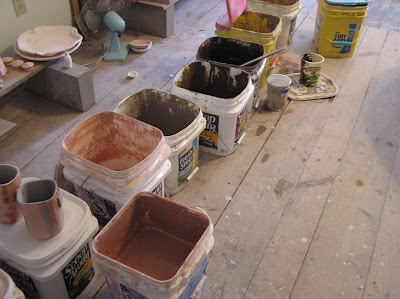 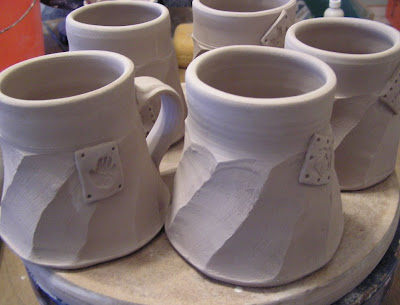 Next bisque: wednesday March 26
Next glaze: Friday March 28, unload Saturday. Watch for new work for sale at our shopping site !
Posted by Lori Watts at 7:12 AM 0 comments 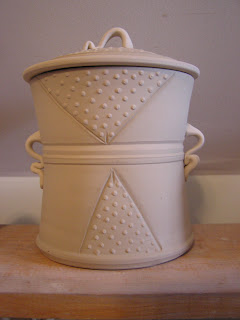 This is the only lidded jar of my recent batch to survive a kitten attack. The last bisque before the soda firing is Wednesday the 20th, due to Easter travelling, so there isn't time to make more. I will squeeze in a few more mugs. which will need to be finished by the end of today.

The soda firing happens Friday March 28th. Here's what needs to happen between now and then:

Four Days in the Studio 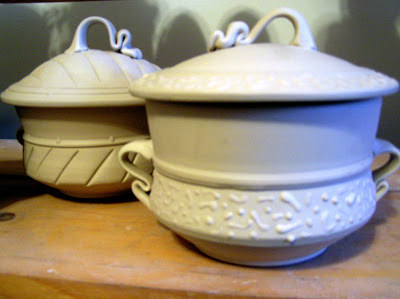 I admit I don't have a particular use in mind for these. Too big to be sugar bowls, too small to be canisters. Any suggestions?
Posted by Lori Watts at 3:14 PM 1 comments

What's going on in the Studio 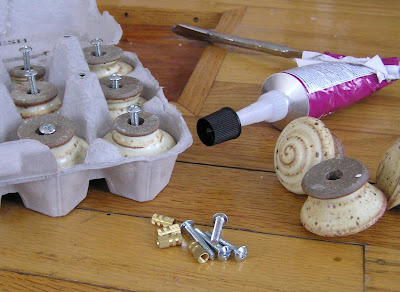 Saturday: My day at the shop: Grand Re-opening tonight! 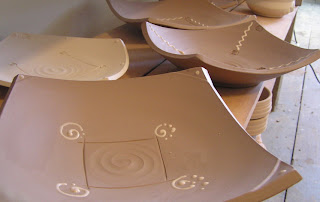 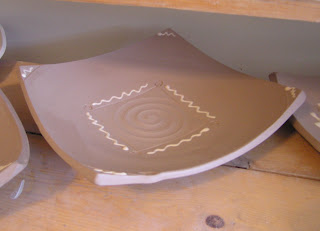 Despite their shape, these are wheel-thrown plates. They begin their lives round, as bowls, and then I cut away arcs of the rims to create the square. The contrasting color is trailing slip -- basically a mixture of white clay and water, which must be applied while the piece is still wet. The decoration thus acheived is both visual and tactile, as the slip will maintain its dimension even after firing.
Next glaze is a salt-firing planned for the end of March, and these will be in it.
Posted by Lori Watts at 8:33 AM 1 comments