Slip Embroidery - I Tried It! 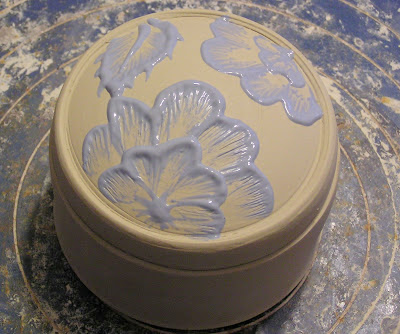 ...and it works! It's not quite as easy as it appeared on the video - a combination, I suppose, of practice and the nature of the material: frosting is much stickier than slip, so (maybe) requires less delicate handling. Also, not unimportantly, it was tons of fun! Can't wait to try another design.

In other news, the cats broke my triple beam, but I'm the dummy for bringing it inside (for soap-making, of course) and then leaving it where they could knock it off the table, knowing full well that knocking things over is a cat's hobby.

But! I had been wanting a higher capacity digital scale anyway. This one could only handle up to 2000 grams, which often meant having to weigh things out in several parcels - nothing could possibly go wrong with that, right? It was only a matter of time before I screwed up a batch of glaze. And, the 7000-gm capacity digital scale was only around $50 with the shipping - well worth it. 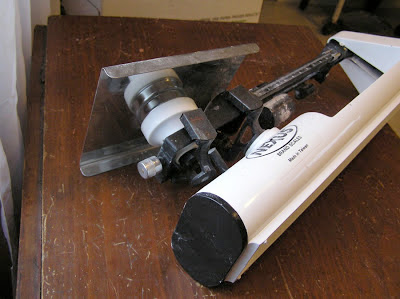 As a bonus, I was able to half-assed repair the triple beam with Gorilla Glue, so it has been demoted to full-time soaping equipment. I should give the cats some tuna, or something, for giving me an excuse for what I wanted to do anyway.
Posted by Lori Watts at 6:56 AM

Nice effort and effect with the slip embroidery!

Could you share where you got your $50.00 digital scale and brand name. I would love to have an affordable scale that weighs up to 7000 grs. Thanks. Margie. Please e-mail at Damorchid@aol.com with info. Thanks again.

Could you share a link to the digital scale that you bought?

Can you provide a link to the original video that explains this technique? I've tried searching Google but can't find it.