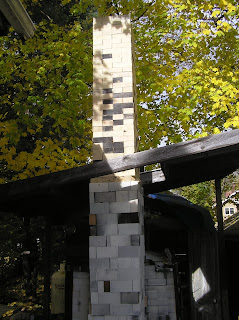 This Train's Running Right on Time 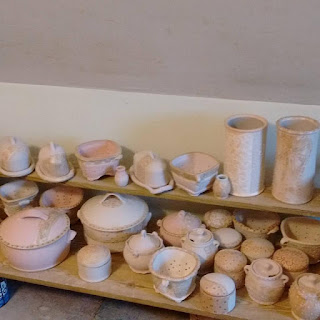 Been mostly hunkered down in the studio with my trailing bottles and buckets of glaze, dipping, drawing, waxing, dipping some more. I expect to come in juuuust under the wire, and deliver my order on its actual due date, November 15th.

When he placed the order, the shopkeeper asked me, "Are you a typical potter?" By itself it's an unanswerable question, so I hesitated. "Potters are always late," he clarified.

Did not know that! If that's the case, I used to be a typical potter. I wanted the orders so badly that I would underestimate my turnaround times: Want a full-kiln order four weeks from today? Sure!! I wasn't lying, not on purpose; I was telling myself I would pull all-nighters and neglect all my other responsibilities to keep my promise. I meant well, but as a practical matter, that just ain't happening. Sleep is only briefly optional, and the rest of la-la-la-la life goes on as well.

During my brief stint as a store owner, I discovered how damaging a missed deadline can be. You have an extremely limited retail season, in the winter, and every day you don't have work is a day you can't sell it. You also have a limited buying budget, and you've committed a chunk of it to buying this person's work, and you'll be expected to pay for it whether it arrives on time or not. By the time you know it will be late - often you find out when it just doesn't arrive on the due date - it's too late to purchase someone else's work to fill your store. If you are on a tight margin, late orders can be the difference between breaking even and not. (Never mind making money. That part never happened to me, not as a store owner.)

I can sometimes do four weeks, for a smallish order, if the order comes in at just the right time in the firing cycle. Six weeks is more likely, and eight weeks is optimal. Better to give a realistic timeline, and meet it, than to promise the moon and lose the account. I'll deliver partial orders if necessary, but I'll never deliver late. Not anymore.

Glazing is the step that bumps right up against the deadline. By the time I am glazing I know when I have to fire in order to unload, sort, and price the work and get it to where it is going on time. My glazing days are often long ones, but once I get in the glazing zone, I lose track of time. I put on Pandora - yesterday I was listening to what I think of as sad-sack radio, a station built around Dwight Yoakam and similar musicians - and crooning, " ♫...watch your broken dreams dance in and out of the beeeeeeeeeams...of a neon moon....♪" For hours. Poor Doug, having to listen to that.

Well, This Explains A Lot

One of the things that I disliked about my old office job was that I felt not just bored with my tasks, but that I literally thought less interesting thoughts* the more time I spent there. Maybe it wasn't a function of the job, but the environment! A study in the journal Environmental Health Perspectives has found that even normal levels of carbon dioxide and other compounds found in indoor air have a negative affect on thinking ability and decision-making. The headline at the link implies that it's office environments specifically, but if you read the article, it's almost any indoor environment.

Most of my claywork is done indoors also, eight months out of the year, but I am rarely inside for more than three straight working hours. I walk to the store, I go check the mail, I stand on the deck and watch the birds at the feeder. (Ha, and I thought I just lacked discipline.) Some jobs - waxing, sometimes glazing, loading, firing, kiln maintenance - are outdoor work. Maybe my more interesting thoughts are a sign of a better-functioning brain!

Wherever you work, take a break and get outside! Your brain will reward you.

*More on this later
Posted by Lori Watts at 4:38 AM 5 comments