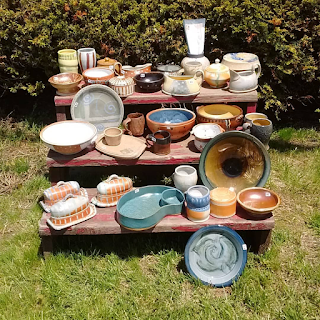 The Pottery Stairs are out!

I've had people ask if I can email them when the stairs are out. I can't promise that - the only reason I am able to sell items for $5-$15 is because there's no effort involved beyond putting them out there. But I will try to post it to the Fine Mess Pottery facebook page every time. Deal? Deal.
Posted by Lori Watts at 9:17 AM 0 comments

Labels: Do Some Good, Hallowell Clay Works, Other Artists, video 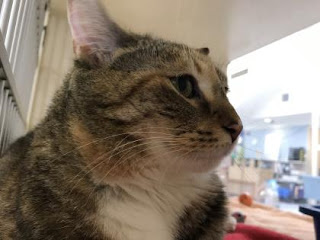 I visited Kennebec Valley Humane Society this afternoon, to choose a cat to sponsor with the proceeds of the Cat Dish Fundraiser. With the help of the staff there, I decided on Periwinkle. She is a big beautiful 4-yr-old tabby, brown with russet undertones - truly a lovely cat. She's very spunky & playful. Periwinkle has been at the shelter since March.
Like my Snowball, Periwinkle has food allergies, so will need a special diet. This was part of the reason I wanted to sponsor her - it can be harder to adopt out a cat with any special needs. Her adoption fee was $75, but now it's FREE! 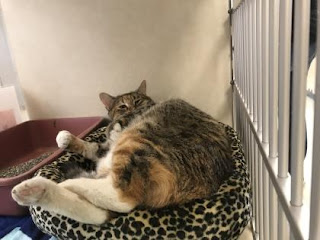 Thank you to all who bought dishes & shared posts to help make this happen! We will keep an eye on Periwnkle online & hope she finds her forever home soon.
Posted by Lori Watts at 11:40 AM 0 comments

We did it! 10+ cat dishes sold; on Wednesday I will drop into the shelter and choose a cat to sponsor. Thank you all who bought a dish, or shared the post to help make it happen.

There's one dish left! I don't need to sell it to sponsor a cat, I already have enough, but selling it would help defray the cost of materials & shipping. Any takers?
Either way, onward & upward! I will report back on Wednesday. 🙂

Update: Will have to visit KVHS tomorrow! Turns out they are closed on Wednesdays.
Posted by Lori Watts at 3:25 PM 0 comments 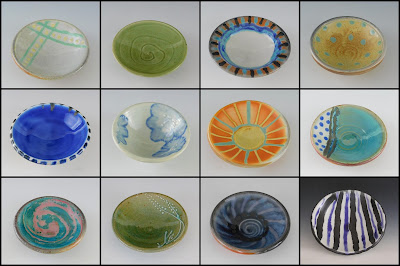 A little over a year ago, I did the first cat dish fundraiser, followed quickly by the second. Together we were able to sponsor the adoption fees for 3 shelter cats, all of whom found their forever homes shortly thereafter.

At that time, I had 5 cats; in the intervening months, a sixth cat has managed to worm his naughty, adorable way into our home. Six really is the limit, though; if I needed any further persuading, Skinny is my first-ever sprayer, which means finding and wiping up cat pee is my new hobby! Toward that end I bought a blacklight, to help find the invisible pee spots.

It's time once again for the Sorta-Annual Cat Dish Fundraiser! If I can sell 10 of these sweet little dishes, I can sponsor a cat's adoption fee at KVHS.  I've got my eye on an older cat named Sweatpants, if she hasn't found a home by the time this fundraiser is done.

Let me highlight a couple of my favorites:
There are lots more in the online shop. Check them out & choose your favorite! I sold some during the Maine Pottery Tour, so I only need to sell five more to sponsor a cat.

Because I can't adopt them all!

I know this may not come to you at a good time to buy; and I know you have causes & obligations of your own! Believe me I understand not having money to support every good cause that comes along. If you can buy one, awesome! If not, maybe you can share this post, so it can reach a person who can. Thanks!
Posted by Lori Watts at 10:22 AM 1 comments 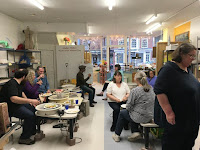 I had a date on Friday, with my community! I gave my students at Hallowell Clay Works an assignment, to make a serving dish perfect for a specific food, then make that food & bring it to our studio-wide potluck. I of course also brought a dish, in a dish; I made a tomato & cucumber salad. We expanded the invitation to the whole studio, so we could meet the people who make the beautiful things we're been seeing on their shelves.

Most of the time I write about being a studio potter, but I am also a ceramic educator. I've successfully built or had a hand in building ceramics programs at three or four institutions now; in a couple of cases the programs doubled in size during my tenure (not all down to me, of course, but I did my part.) I find that the key is community. Clay has a really steep learning curve! It's easy for students to get frustrated and give up when the beautiful items they dream of making remain out of reach for months and months. What keeps people coming back, to pay money to be frustrated over and over again? Community. 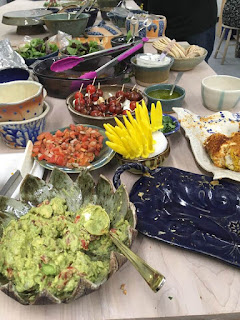 Friends. Encouragement. People to tell your stories to. People to commiserate with when things don't go well, and to cheer for and with you when they do. I have come to realize that my main contribution as a ceramic educator is not merely to teach people how to make stuff, but to knit together communities of supportive friends.

Almost 20 years ago, Robert Putnam wrote a book called Bowling Alone: The Collapse and Revival of American Community. In it, Putnam describes the decline of social capital in the late 20th century, with decreasing participation in activities and groups that pull people outside of their existing in-groups.
Bowling Alone was written prior to the existence of social media, but I tend to think, despite its name, that social media has the effect of dividing us further rather than bonding us. People we don't interact with in mundane ways can be reduce to one point of view we disagree with. Thus we grow ever more isolated in smaller and more limited circles.

So what, tho, right? The answer:


But does it really matter that social capital is declining? Putnam argues that, indeed, it does, as social capital "has many features that help people translate aspirations into realities." (p 288) Putnam identifies five such features. First, social capital makes collective problems easier to resolve, as there is less opposition between parties. This results in improved social environments, such as safer and more productive neighborhoods. Second, it makes business transactions easier, since when people trust each other, there is less of a need to spend time and money enforcing contracts. As a result, economic prosperity increases generally. Third, social capital widens our awareness of our mutual connectivity. This can improve the quality of our civic and democratic institutions. Fourth, it helps to increase and speed up the flow of information, which, in turn, improves education and economic production. Finally, social capital improves our health and happiness through both psychological and biological processes which require human contact.

In particular, in 2019, we are politically polarized as we've never been before. We need places where we can come together and see the whole person, not just their ideology. Places where we can experience our commonality.  We need community.

Art is positioned to serve that function! In fact it happens naturally, but I've learned in my role as instructor that I can foster and nurture the bonds that create community.

That's what Friday night was. A bunch of fun people, great food, and the salvation of our society.

Luckily I haven't had to in a while, but longtime readers will remember that sometimes I write about depression in this space. With that in mind, I enjoyed a particular moment in Avengers: Endgame, which Doug & I went to see last night. Technically I suppose a Spoiler Alert is in order here, but I don't think I am giving away much of the plot or its resolution with this. But, I'll put in a page break, just in case.

HELLO BLOGGER THERE IS SUPPOSED TO BE A PAGE BREAK HERE

Labels: not remotely pottery related, Nothing Much, Personal

It's Monday, May 6th, and real life has resumed after being submerged in work to make the Maine Pottery Tour happen.
For my event here at Fine Mess Pottery, I really can't complain! We had, idk, 80 visitors? Sales were about 15% above last year. My guest artists each had some sales as well, so I am pretty happy. One odd thing: there was a HUGE disparity in attendance Saturday vs Sunday. Like, more than 60 people Saturday vs less than 20 on Sunday. I was a bit surprised, because the Kennebec Journal sent a reporter & photographer out on Saturday, and the article came out Sunday morning. I thought that would bring some folks out. Still, not complaining!
Some things that worked:

On to the next thing: a new cat dish fundraiser! Once again I've made some little catfood-sized dishes, and once again, if I sell 10 of them I will sponsor a cat at Kennebec Valley Humane Society. We're halfway there: with the dishes that sold during the pottery tour, we only need to sell 5 more. It's 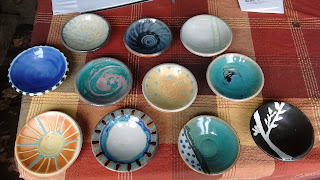 on my list this week to photograph these individually & get them listed in the online shop.

Too tired to say much more, but here are some photos from Day 1 of the Maine Pottery Tour.
We had a nice crowd for the unloading - that was fun! Especially because the firing was good. It would have been...well, less fun if I were unloading crap pots.
One of my visitors was a photographer, & she volunteered to take my cell & snap some shots. Good lesson here, for me: always wear a hat, if I think there's a chance someone might take my picture! I always hate my hair, in photos. 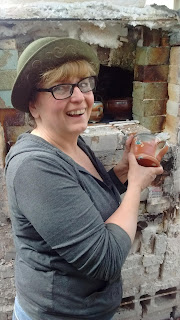 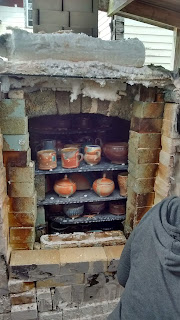 A reporter and photogra[her from the Kennebec Journal also came by. They spent a couple hours talking to me & visitors, and I'm told we'll be in the paper tomorrow! Pretty excited about that.
Excited, but, as I said, super tired! Gonna go take a bath, then maybe watch a show or otherwise shut my weary brain off.
If you're anywhere near me, come visit tomorrow! The Pottery Tour continues, 11-4. 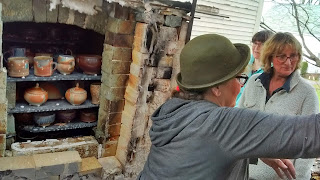 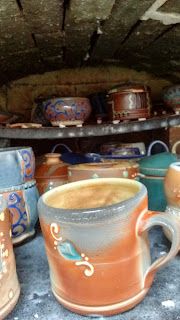 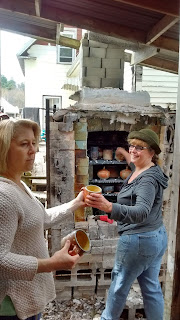 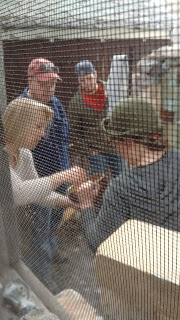 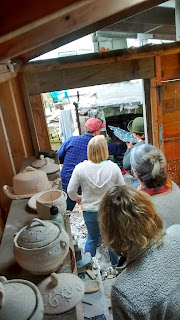 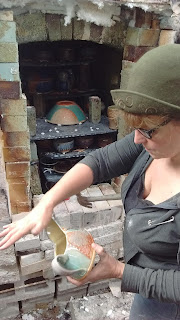 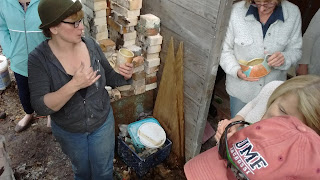 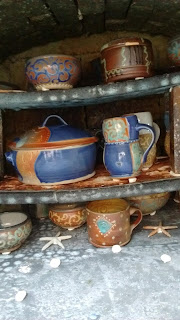 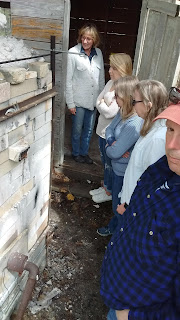 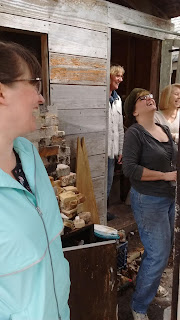 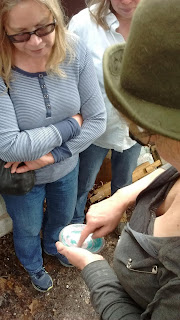 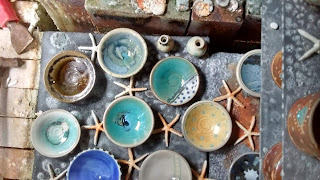 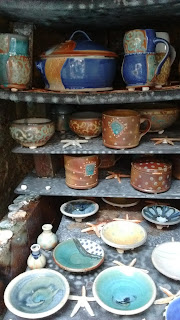 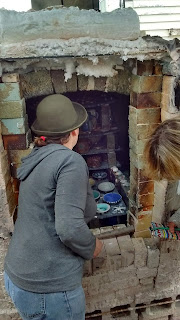 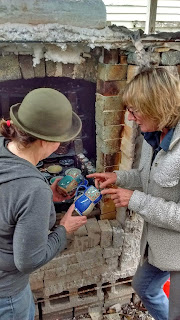