Though I have already successfully fired a bisque under the newly repaired arch, it hardly counts as a test. I could bisque in a trash can, with some minor modifications, or in a hole in the ground ( I actually have done that.) Today I am unloading the first glaze firing!

I am a bit nervous about it, because even small changes to the kiln can affect the way it fires - and in addition to patching up the arch, I made a couple of other changes. I dropped the height of the bag wall one course. I used to need the extra height, or the soda would get sucked straight out the flue - this little kiln used to draw like a mad bastard. When I rebuilt the stack (2 summers ago? ) I built it one course smaller, which - I hoped - would diminish the draw a little. I'm only just now getting around to testing that idea, because the kiln was firing so beautifully I didn't want to rock the boat. If I can fire successfully with a lower bag wall, though, that will increase the stacking space, which will increase my yield: I'll get more pots & therefore more money, for the same amount of propane.

Assuming, of course, it works out. Let's see what we've got: 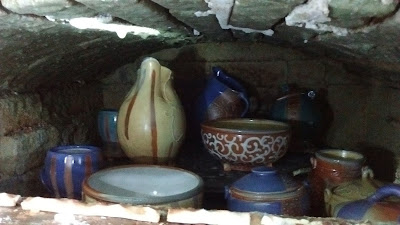 First peek looks good! My big fear - that the top half of the kiln would be pasty & dry - is alleviated. Now to go lower; we'll be looking for good coverage there as well, and hoping hoping for no major cool spots.

At that point I stopped taking photos, but here's the scoop: Most of the load was really good, but the bottom layer was a little cool. Probably salable, but they will be much better pots if I refire them, and really I lost almost none of this load to the usual mishaps: soda drops, random cracks, little hunks of kiln shit landing in bowls, so I don't mind pulling a few to get a jump on my next firing. So, mostly good news! I think if I had laid ^10 down flat, that would have been just enough to bring the bottom layer the rest of the way.

Some of these are for a standing order (YAY STANDING ORDERS!) but most will be coming with me to the Center for Maine Craft tomorrow, where I will have my own mini pop-up shop from 10 to 3. Come see me! The Center is located at the travel plaza in West Gardiner - take exit 51 if you are coming north on 295. 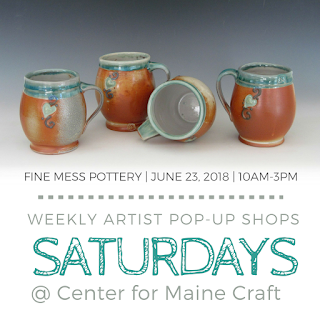 See you there!
Posted by Lori Watts at 9:20 AM 3 comments

The Shapes & Colors of June 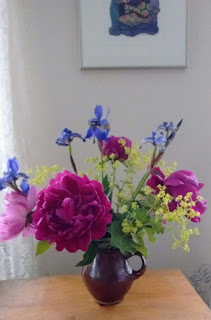 The flowers of mid-June make the best bouquets! The enormous raspberry heads of peony, the delicate deep purple shapes of Siberian Iris, the fizzy lemonade froth of Lady's Mantle. All easy to grow, too,  at least here in Maine.

I made the little pitcher that serves here as a vase. As often happens, it was unappreciated when it came out of the kiln - many more immediately eye-catching pots came out of the same firing, and it was overshadowed. Over time it's quietly served its functions, and become a favorite. Like people, you get to know pots slowly.

Happy June, the second-best month in Maine - the best being September, but it's a tight call.
Posted by Lori Watts at 5:20 AM 1 comments

Labels: Pottery in the Wild

Testing a new flashing slip recipe - I kind of just made it up, with crowdsourced suggestions. Let's do it.

Kiln repair went well, I am unloading the bisque today. More info about that (for the kiln geeks among you - I love you, kiln geeks! 💙) soon.
Posted by Lori Watts at 5:57 AM 1 comments 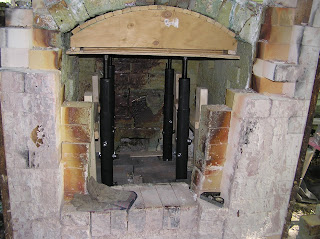 OMG I think this is going to work...sort of, anyway.
I propped the arch for on four jackposts, high enough to lift the weight of the arch from the walls. This allowed me to straighten the walls a little and pop in the fallen brick. I couldn't completely correct the spread tho - I'd need to pull down the walls for that. I might do that next summer but for now I need to get this kiln working again - I have orders to complete. So! Because the walls had spread, there was an inch & a half gap in the front ring of the arch, and a much narrower wedge of gap in the second ring.

On the suggestion of my friend Tyler Gulden - let me here put in a 100% sincere plug for him: if you have a few bucks to hire your kiln built, he's the guy you want, and his services are affordable to the point of ridiculous!Anyway, on his suggestion I got a commercially produce high-alumina castble product called Noxcast 32, durable to 3200°F and non-reactive to soda. When I do my someday-rebuild, I am going to line the interior of the kiln with this stuff!

I needed it not to stick to the wooden arch form, so I melted paraffin wax & poured it into the gap, then heavily applied cooking spray. I mixed the castble into a thick-but-pourable consistency, then scooped & dribbled it between the brick until the space was filled. 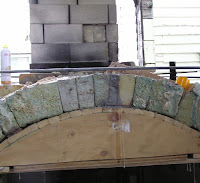 It will need to set overnight but by tomorrow AM I should know if we are good to go!