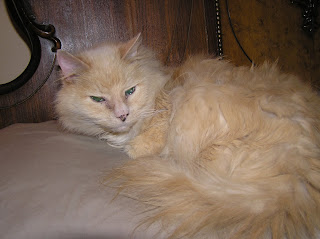 Let me introduce my studio cat, Waldo. Now, I have five cats, and they all come into the studio from time to time, but only Waldo will hang out for hours while I make things. He doesn't especially want to be petted or picked up, he just wants to watch me. Three of the other four are kittens, and as such, holy terrors in the studio: knocking over slip cups, treading across freshly thrown platters, and so on. The fifth really loves my husband best, as they came as a matched set (with two turtles) when we all met.
In addition to being incredibly beautiful, Waldo has a story.
Right after I divorced and moved to Maine, I bought a (so-called) house on Wiggin Mountain in Parsonsfield. I had this idea that I was a country mouse at heart, that the only reasons I had always been a city dweller were circumstantial. I figured I would brew my own beer, and keep bees, maybe tap a few maple trees, and so on. Work in my studio in blissful mountain solitude. Yeah, right. As a life experiment, it didn't work out, except as learning experience.
There were some nice things about the place. I could sunbathe nude on the roof, utterly safe from observers. It was a short hike over the mountain to Province Lake in New Hampshire. The neighbor kids half-seriously thought I was a witch. Best of all, it was where I met Waldo.
I saw him first when I was considering buying the place. He was on the sun porch, so I thought he belonged to the people who lived there. I soon learned that no one lived there, and each time I went out to see the place, Waldo was there. After a while I concluded he was a stray, and decided I would adopt him when I moved in. But the closing was postponed, and the process went on and on, and by the time I bought the place, Waldo was nowhere in sight. I mentioned him to Patrick, the former owner of the house, after the closing, as he was taking me around introducing me to the neighbors. He laughed. "That cat is still alive?" he asked.
"We put food out for him after you left," the neighbor lady, Ruthie, told him, somewhat reproachfully. It turned out that Waldo had been Patrick's cat, and when he moved away, Patrick just put him outdoors and drove away. Parsonsfield is both mountainous and inland; it gets damn cold in the winter. It was double digits below zero the winter I lived there. Waldo had survived for three years dodging the neighbors' Rottweilers to get the food she put out for him and sneaking under the foundation to get to the south-facing sun porch, where it was marginally warmer.
That was how I learned his name.
I asked Ruthie what had become of him, She told me a woman who had, like me, come out to look at the house, had knocked on her door, asking if he was Ruthie's cat. Upon learning that he was not, she asked to take him home with her. So, I thought, Waldo has a home. That's good. I thought that was the end of the story.
Fast forward six weeks. I was reading the Portland Press Herald, when my eye fell on the adoption column from the Animal Rescue League. There was a notice regarding a long-haired orange cat named Waldo, described as timid but affectionate. I thought that it had to be a coincidence, but it continued to nag at me, so I called.
"This cat Waldo you have, is he missing fur from his tail?" I asked. The woman laughed. "Yes, his tail is kind of like a rat's."
It was my Waldo. Interestingly, though he had been warm and well-fed at the shelter for two months or more, the hair on Waldo's tail -- lost due to frostbite -- did not grow back until he was back home with me. By the way, Waldo loves his new siblings. Here's him with Happy Jack, one of the kittens: 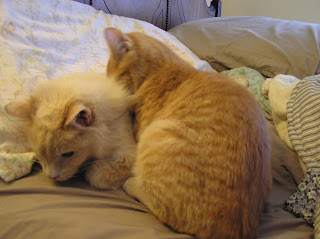 Unfortunately I have to add a sad postscrpt. Waldo died just a couple of weeks after I wrote this entry. Seeing the photo at the top of the post is very hard, but not as hard as not seeing Waldo in the studio, and on my pillow where the photo was taken. Waldo, if you can hear my thoughts in the next world, I love you and miss you, and I will see you again.
Posted by Lori Watts at 3:43 AM 1 comments

The Three Days of Christmas

I don't know about you, but I still have shopping left to do. For some reason, it's the men on my list who are hard to buy for. My sister is easy: anything I like, she'll probably like. My mother is not difficult either, although she will never actually say anything that she wants, except pottery. One advantage of being a potter is that I always have that gift option. I try to reserve that for years when I am impoverished, since pottery every year might get a little tiresome.
I'm a little more flush (ha! very relatively speaking) this year than I sometimes am, despite car troubles and the recent adoption of a thousand dollars worth of vet bills in the form of three kittens that Doug and I found abandoned under a dumpster. Still, it's the 22nd and my shopping is not done. It's on my list for today.

On my studio list are soup tureens. These are different from regular casserole dishes in the style of lid, and the size. Two quarts is a reasonable baking dish size, but nobody ever serves only two quarts of soup.

We have bags and bags of green beans frozen from last summer's gardening, so my current favorite soup recipe is this one:

Paste the flour into a little of the water. Put it all into a stoneware tureen and place into a cold oven with the lid on. Turn oven to 325; let it cook for an 90 minutes, then remove from oven and let it rest, covered, for fifteen minutes. Serve in the tureen!
It's great for cold days like today.
Posted by Lori Watts at 5:34 AM 0 comments

Now You Can Shop!

As promised, I have been figuring out how to use Paypal so I can sell pottery on the web. I think I've got it! If you go to the links section at the bottom right, click the one the says "Shop Fine Mess Pottery." It seems to be working but I haven't sold anything through it yet so I don't know for sure.
I am making mugs today. Snow seems to inspire me to get into the studio and throw.
Posted by Lori Watts at 3:14 PM 1 comments

Tonight is Portland Pottery's holiday party! I love this event. I teach there all year round, but there are students and faculty that I only see at this shindig. I love how the studio is transformed, and seeing what everyone has been working on. It's also the beginning of my three week hiatus from classes, which means extra studio time. This morning is all pricing and packing; we'll leave for Portland around 2, in order to have time to set up our wares.

In other news, I am working on creating Paypal buttons so that you can shop through my site; so far I can figure out the much simpler "Donate" button, but that's no help here. Keep watching for it -- that should happen in the next couple of weeks.
Posted by Lori Watts at 9:54 AM 1 comments

...is a great way to start a studio day. Add cranberry sauce, thawed out from Thanksgiving, and the day couldn't start any better. I can't believe how easy it is to make cranberry sauce which is at least a thousand times better than the can-shaped mass than I used to associate with the phrase. Here's my recipe:

Boil cranberries, water, sugar, and allspice together until cranberries are all burst. Cool. Stir in crushed walnuts.
Chill before serving.

It's already January for me. Well, not quite. I still have shopping to do and events to attend, and mountains of sweets to somehow avoid consuming. But it's too late for me to make inventory and have it fired before Christmas, so in a sense my post-Christmas season has begun.
I love January as a making season, because there is no urgency to have inventory to any outlet, so I can make whatever I feel like making, and take as much time as it takes, stress free. I have a small order for cat urns, and another for plates, and then it's play time.
I'll post the in-progress photos of my explorations!
Posted by Lori Watts at 5:24 PM 0 comments