I want to thank everyone for being so kind after my last post, about depression. I won't say I'm over it - though I wish I could - but some days are better than others. Today didn't suck. Most of it, anyway.

Yesterday I took a U-Haul (did I mention my car died a couple of weeks ago?) to collect up my pots and shelves from the pop-up Holiday Pottery Shop in Gardiner, which closed on December 24th. The shop did okay but the weather was against us; we lost a couple of weekend days, and the last three shopping days before Christmas due to storms and poor conditions. And it was a shorter retail season to begin with. A thing I noticed: people were buying smaller things: ornaments, magnets, pendants, like that. Next yer I will keep it in mind. Also, non-pottery items seemed to do well. Next year I will have soap.

As an aside, I think the soap is finally at a level that I would feel okay selling it. When the newest batch - Cocoa Loco - is ready, I'll post some bars for sale.

Anyway. I still have lots of pots left, and pretty good ones if I do say so myself, so I photographed a few to refresh the website. Today was one of those winter days when it never quite gets light, so the pics were pretty dark - I had to lift them using Picasa. They are still accurate, color-wise, but not the best photos I ever took:

The Week of Reflection Has Been Indefinitely Postponed 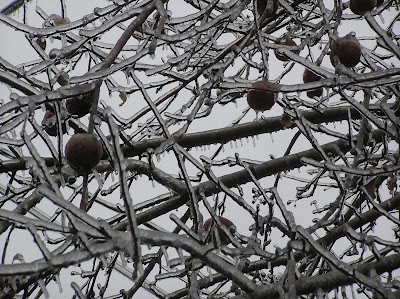 Normally the week between Christmas and New Year's is when I do my best thinking. It's a kind of limbo in which the old year is kind of over, with the big bang of Christmas - but the new has not begun. I look back, consider what I did well and what I could have done better, and think about what I'd like to achieve, and who I'd like to be in the New Year.

Yeahno, not happening this year. My one reflection is more of a confession, one which will come as no surprise to those who know me personally: the truth is I spent much of the latter half of 2013 down the rabbit hole of depression, my old nemesis. The further truth is, I'm not out yet.

Depression, as you may have noticed, is not great for blogging. I hate the sound of my own voice and everything I type sounds insipid, so after a while I just stop. Add to that, I'm just about as broke as it's possible to be and still be under a roof, so basically anything I do that doesn't make money seems self-indulgent. There are a lot of heads depending on me to keep that roof up there. Not even sure how pottery is going to fit in, if I'll have to get a job...it's all too much to think about.

My husband and nephew went out of state to my in-laws for the holiday. I had planned to go as well, but then the ice storm took out our power around 11 pm on the 23rd, and I felt someone should stay with the pets and the house, to guard against frozen pipes and other calamities. I also felt there was no point all of us being cold. I'm sort of a grinch even in the best years, so missing out on all the Christmas festivities was no hardship; in fact in other years I have thought of a couple of days alone in my house as my Christmas gift to myself. This year, sitting in the increasingly cold dark, wondering when or if the heat and light would return, I thought I had inadvertently created my internal world on the outside.

But then I saw the flashing yellow lights go by around 9 pm. Unfortunately for my corny little metaphor - but very fortunately for myself and the four-legged ones - CMP had come to my neighborhood. As so often happens in this mental state, I sort of hate myself for even having depression: tens of thousands of people in Maine are still in the cold dark, what have I got to be depressed about?

In what might be a positive sign, I spent the day cleaning the house, which had gotten into a dreadful state. My husband and nephew are both slobs, and my choices are a) clean up after them; b) nag them daily; or c) just leave it. I lost energy to fight that battle sometime after Thanksgiving. It's clean now, though, and it feels so much better.

Not sure I'll post this; if I do it's unlikely that I'll leave it up long, because as soon as I re-read it I'll delete it as despicable whining. Or whinging; the British way sounds even lower. I still have a few days to fight my way out; I'd hate to start 2014 this way. 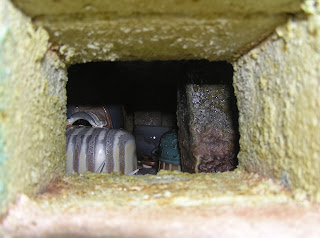 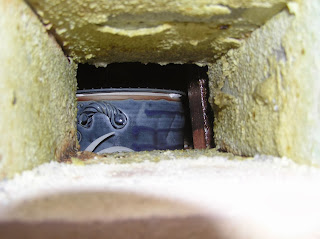 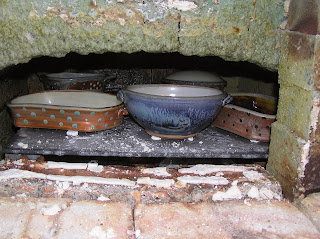 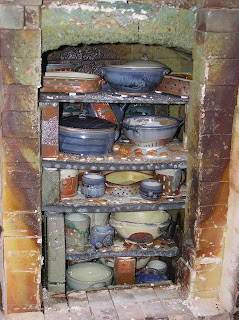 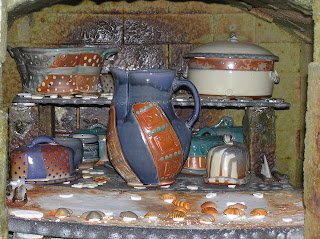 I've spent the last few days smoothing bottoms, grinding woogies, sorting, pricing and packing. Most of these pots are destined for stores: the Holiday Pottery Shop, a pop up store I participate in with about a dozen other clay artists; Portland Pottery's Holiday Sale; Summer Island Studio; and of course Kennebec River Artisans.
Lots of butterdishes in this load! Also mugs, and mixing-sized bowls. I may grab a few minutes to take better photos of my favorites this afternoon.

The mad Christmas rush starts early for potters, and ends early, too. It's too late for me to make work for this shopping season, so I am relaxing a bit, and making soap. It's also too late to sell soap for Christmas, as it requires at least a couple of weeks, even by the quicker process, to cure. I give it as gifts to family and friends. I've made two batches so far: a Kiwi Lime that turned purply-brown - in my impatience, I think I had the batch too hot - and a much more successful Coconut Bar. They looked like this: 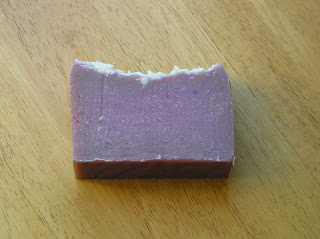 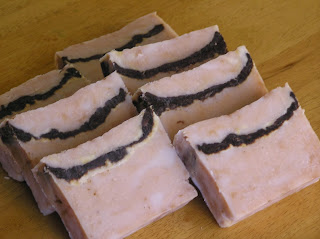 Soap is like ceramics, in that it's all applied chemistry. Making soap is also like soda firing specifically, in that I can do everything the same and get different results, and like soda firing, this is both a good thing and a bad thing.I'll probably make a couple more batches before coming back to clay: the stretch between now and the end of February is fun for me because I can concentrate on making larger, more detailed pieces, like the Bustier Baskets, because I am deadline-free. (Also nearly cash-free, but that's another story.)

Today is all pricing and packing for the Portland Pottery event, which opens tomorrow night. The sale is open to the public Friday, Saturday, and Sunday, the 13th, 14th, and 15th. If you're in Southern Maine, check it out! If you are closer to Gardiner, maybe you'd like to visit the Holiday Pottery Shop, at 287 Water Street.
Posted by Lori Watts at 7:15 AM 3 comments