Three Shinos and a Chrome

Remember that old notion that you can't fire shino in soda? Well, forget it. Here were my shino soda results: 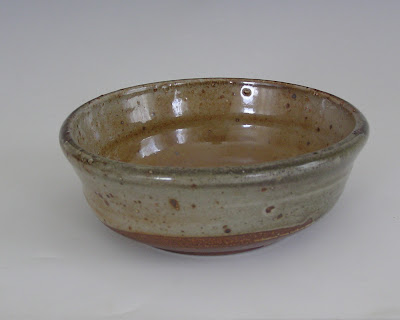 Fat with a slight iridescence, nice both inside & out. 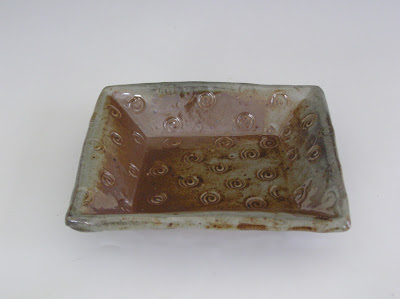 More irisdescent, with some carbon trapping. This glaze was more interesting in soda than in stoneware! 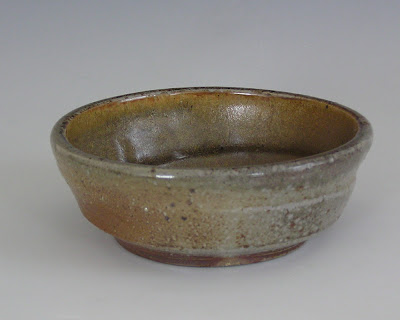 This was not a great result -- the interior in particular is flat and dull -- but too late I remembered I was using the version that is intended for white claybodies, but I was testing on a brown clay. So, Not giving up on MD Shino, not yet. 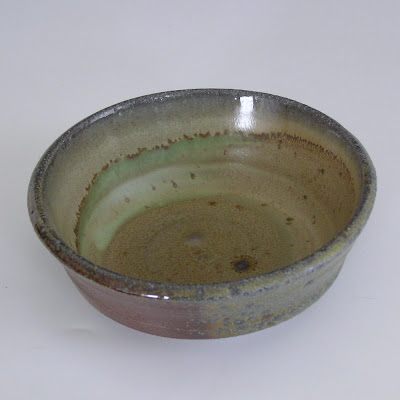 And, hey, wow! I usualy steer clear of chrome as a colorant, as most chrome greens I've seen lack subtelty, to say the least. This is the adjusted waxy white recipe, with one-half of one percent chrome. Waxy indeed, and mostly yummy tan with a little blush of green. [Wow, I just realized I never posted the adjusted recipe!! Which is unfortunate, because I thought this is where I stored the recipe. Rats. Anyway,I have a post it the works on adjusting glaze maturation points. I'll find this recipe (hopefully) and post it then.]

So, I've got two new buckets to mix up before the next firing, tentatively scheduled for May 15. If I get "rained out"  - actual rain wouldn't stop me but other circumstances might - I'll have to push it to the 27th. 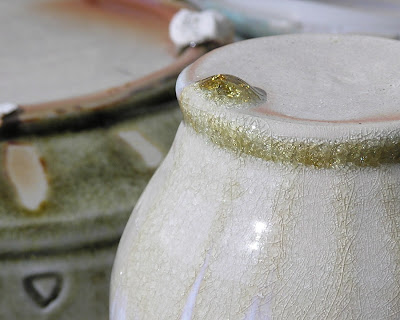 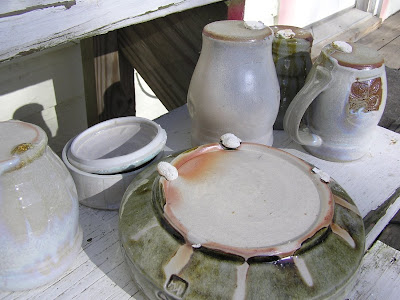 Stuck wads and dragon's eyes, those luscious fat drips that result when the glaze flows down to the space betweeen the pot and the kiln shelf, are a regular feature of my firings now. I'm not complaining; I can usually smooth them over sufficiently that the function is not compromised. But I'd be lost without my bench grinder. 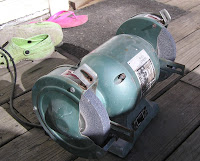 It wass my dad's bench grinder, actually; he bought it at a yard sale for $5, just weeks before he went into the hospital for the last time. He didn't have anything specific in mind for it. Like me, he loved yard sales and bargains, and often bought items on the cheap that just looked as though they might have a use. He never did get to use the bench grinder, but I use it often, and silently thank him each time.

Of the pots in the photo above, none were a complete loss, and only one will even be a second. (Other potters have different standards; mine is that runs and drips are part of vapor-glaze firings like wood and soda, and if a ground drip is not ugly and doesn't interfere with function, then it's not a flaw.)

In other news, my new camera has arrived. Obviously. And it's a sunny day, perfect for re-arranging the living room to shoot the best pieces from the last fiirng. Stay tuned!

1) My new/old camera is winging its way towards me even as I type! This was a very lucky Ebay find, an exact replacement for the camera that gave up the ghost a few weeks ago, for far less than a repair would cost. I had to find an exact replacement as my husband does a lot of underwater photography, and any other device would not have fit the waterproof case. It's funny how excited I am for the camera to arrive, when it's only what I have taken for granted for the last six years. While living camera-less, I have been seeing things daily that absolutely needed to be photographed; and me with no means to accomplish that. Look for lots of photos to appear here, and on my other blog. Although that one is heavy on the cute-cat-pics, so if that's not your thing...

2) Buddy firing this weekend! My dear friend is joining me for a firing this weekend. It's kind of a long story, but without MF, my path to this kiln might have been a much longer one. I won't say I wouldn't have a kiln, because that was always going to happen, but she played an important part getting things rolling. Anyway, she is on her way from Portland, about 50 miles away. We'll glaze & load today, and fire tomorrow. I bought good coffee and spiffied up the guest room. Can't wait.

And, by the time this firing unloads I should be able to photograph the best pots. Big joy!

I hate, hate, hate not having my camera! In the meantime, close your eyes and imagine some nine-inch plates, with a shallowly dished interior and broad, flat rim. Imagine that these plates have been glazed in a high-soda-ash-content shino, and then had images painted in wax. Imagine futher that the wax burned away in the firing, and the resulting carbon was trapped in the surrounding glaze, giving it a smoky, golden hue...
Oh, never mind. I've bid on a camera exactly like the one that broke, on Ebay. My husband purchased ours for several hundred dollars, maybe six years ago. I figured with shipping, I couldn't get it fixed for less than $100; the auction price is currently at $37. This makes sense, as the camera is several years old, and only 4 megapixels, whereas 8 megapixels is standard among mid-range cameras now. But 4 is more than plenty for my needs. Nor was the one I bid on the only one available, so sooner rather than later I expect to have it replaced. (My husband swears he can fix it, but he hasn't yet, and nagging is not my style.) These plates will be off to their forever homes by then, but I'll make more, and then you'll see what I'm talking about.

Day Off, Sort of

I gave myself yesterday off to read Scott Turow's Innocent, a sequel to Presumed Innocent, which was published in 1987. A true day off is rare as unicorns for me. Even if I am not at the office gig or in the studio, I am cleaning house or doing yard work. I am not having a pity party: there is an element of recreation in all my versions of work, and time for pure recreation most days. We have, for example, just finished watching through the nine seasons of The X-Files, via Netflix. Still, a day when I give myself permission to do nothing productive? I can't remember the last time that happened.

The book is riveting. I sat by a sunny window with an elderly cat purring and drooling on my lap, and read straight through. The funny thing is, after I turned the last page, though it was still my Day Off, I was eager to get into the studio. I trimmed a stack of plates for a dinnerware set I've been designing, possibly for small-scale production. I glazed some mugs and bowls for the next firing. I guess that's what it means to love your work.

My camera is still on the fritz, and finding a place to repair it is on my list for today. Said list is massive, due to yesterday's goofing off, but I'll get it done. And if I don't, there's always tomorrow. 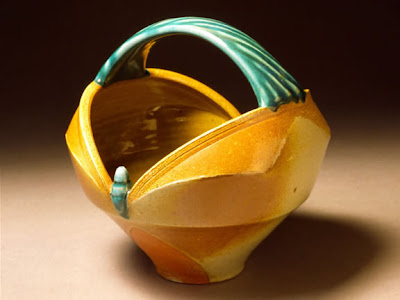 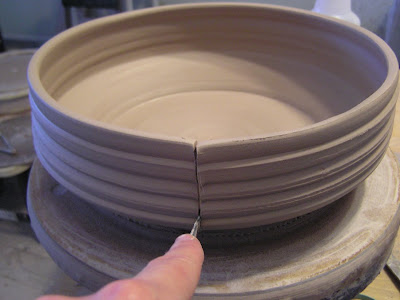 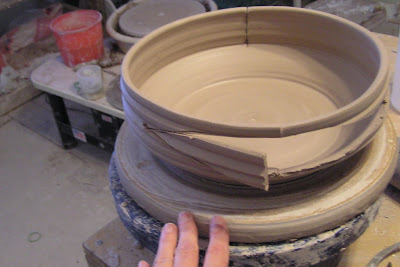 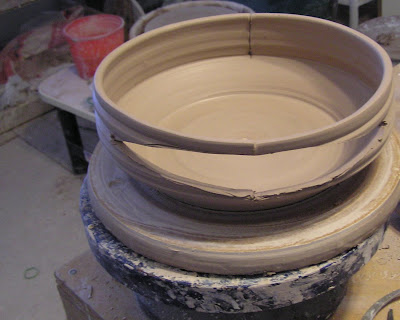 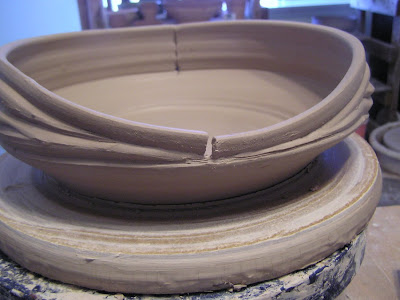 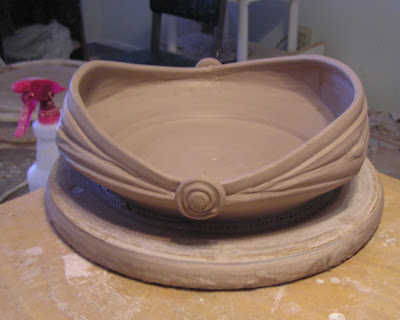 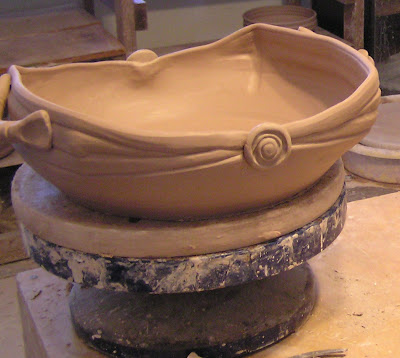 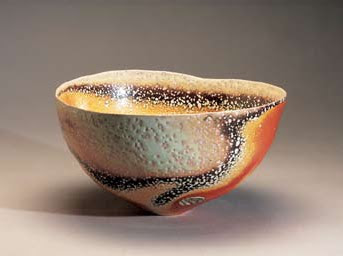 Planning to mix this up to test in the upcoming firing. To be honest I am fighting a temptation to go long: mix up a whole bunch, and just trust Gail on this one. Nonono! Repeat as necessary: it's best to test.
Posted by Lori Watts at 10:25 AM 1 comments

Zen and the Maintenance of Art 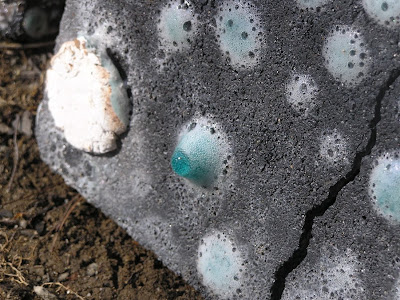 It's a beautiful day to grind shelves, a task I have not yet undertaken since I began firing the new kiln, and might not be motivated to do but for an enormous soda glob marring the interior of an otherwise nice mug out of the last firing. I am not absolutely opposed to soda globs, nor are they always flaws; but they can be sort of crispy and bubbly in a way that compromises function, so I don't encourage them.

It would probably be better to grind and wash shelves in between every firing, but I put it off until today, when it is finally nice enough to do this outside. While not my favorite task, I can get in a kind of mindspace of thinking, This matters, too. This is just as important to the making process as throwing and glazing.

Who could resist a glaze called "Shino Sauce?" Just making a note of it here so I will know where to find it. I got it from Keith Phillips blog, Mudstuffing Sketchbook, a fun read with a wealth of information for potters. Keith also fires with soda, so I am in hopes this shino will do well. As I may have said before, in my past experience, soda + shino = blah; which is a shame, since my shinos are soem fo my favorite stoneware glazes. Unwilling ot leave shino behind entirely, I am in the process of mixing several test batches for the next firing. Which was supposed to be this weekend, but - April Fool! -  14 inches of snow had a different opinion. The firing has been rescheduled for April 15 -16, unloading on the 21st.