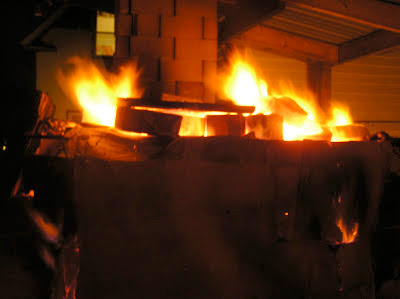 As Cindy and I were preparing to add our second batch of soda, we had a visit from the Fire Department. One of my neighbors had called and reported an illegal fire. I was surprised about this for two reasons: first, most of my neighbors know what I do and what to expect when the kiln is firing, and second, I checked with the fire department before I ever put the first kiln here, back in 2005, and they had no problem with it. They assured me they just had to respond to the call. They asked a few questions, then went on their way.

My worried neighbor lived in the one apartment building which has a direct line of sight to the kiln. The residents there tend to come and go pretty quickly and I don't meet all of them. I'd seen this lady before, but she had seemed singularly uninterested in talking, so we hadn't met. She watched my interactions with the fire fighters but did not approach. I thought it would be a good idea to introduce myself, afterwards, and I did so, but I doubt she will remember it in the morning because she was well and truly drunk.

She was also, not to be uncharitable, maybe not the sharpest knife in the drawer. I have no fear that she will read this as, no snark intended, I think it unlikely that she can read. I told her I was sorry to have alarmed her and asked if she would like to come over and see the kiln up close, She declined, citing a deep fear of fire. Aha. But at least she seemed friendly now, and I thanked her for keeping an eye out for the neighborhood. So hopefully I've put out that fire, metaphorically speaking.

The Kickstarter continues to climb, slowly. You can check it out here.
Posted by Lori Watts at 5:29 PM

Sounds like you handled the interaction with your un-neighborly neighbor really well! Good going!

found this link to potter using cone 6 soda, gas fired. Has glaze recp listed. Maybe it can help you.