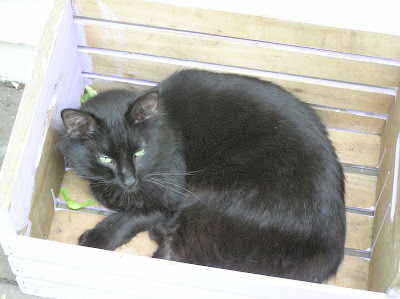 I've moved my glazing operations outside for the season. A little late this year; we've had a cold, rainy spring. It's nice to be outside whenever possible, and glazing is so messy that indoor clean-up can take a bunch of time I'd rather spend doing something else.

I've had company this week while I glaze for the 6/19 firing. This little cat took up residence on our deck on Monday, and has shown no inclinations to leave since then. He was skinny but shiny and apparently healthy. (He's not so skinny now, since we've been feeding him for almost a week.) He's a little luv, a lap cat - it seems like he must have been somebody's pet.

Actually, I've caught glimpses of him around the neighborhood before, just passing through the yard, for a couple of months; which raises the question: if he has a home to go to, why doesn't he go home? My fear is that somebody just moved away and didn't take him with them. Though he has hardly left our deck, I thought I should give him a chance to go home, if indeed he has a home. So I put a collar on him, thinking that if he goes home and his people see the collar, they'll either keep him in for a while - and I won't see him - or he'll come back without the collar. That was Wednesday. He's still wearing the collar.

I've called the police and humane society, but no one has reported a missing black cat in the area. He's intact, so just feeding him and letting him roam free is not an option; we can't have him making kittens that will themselves become starving strays. Adopting him ourselves is out, also, as we already have five cats, one of whom is very old and deserves some peace. So, on Monday he'll have to go to the shelter. It's the best thing for him; they will neuter him and bring him up-to-date on shots, and test him for catly disease like feline leukemia. They will also keep him for a while in case somebody out there is missing their furbaby!
Posted by Lori Watts at 5:42 AM