Another Step Along the Way 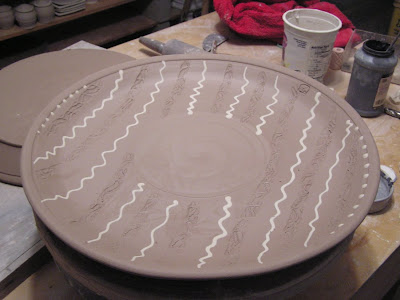 One nice thing about platters is that I get a larger surface to decorate. Though I often use a single large stamp as a focal point, this time I went with an overall, wallpaper design. It actually looks a little wallpaperish, perhaps in a Victorian home. 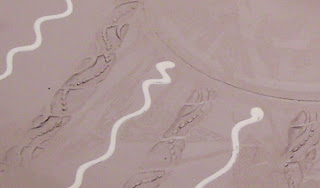 I made the roller of clay. It works best bisqued, because if I leave it green, it falls apart relatively quickly. Some potters see this as a plus, as it forces them to remake their decorative tools regularly; but I get too attached to mine. I hate reaching for a stamp or a roller, only to find that is has a big chip out of it. The little squiggle you can see in the photo above the slip bottle is a bit of wire I use as a stopper; that way I can store the slip (or glaze, depending) right in the bottle without having the tip clog up.

Expected firing schedule: Bisquing Thanksgiving Day (Doug's gonna have to be in charge of that one, as I will have my hands full of turkey, turnip, pies, and so on); glaze firing December 5, unloading December 6. Do you ever have a terrible temptation to do what you know hardly ever works? I am dying to glaze only the middle spiral, and let the soda work its magic on the rest, because the contrast of the clay & slip can be so handsome. But in my experience, soda doesn't take to the horizontal surface that well, and firing them on end has resulted in major warpage in past. Still, I've got plenty of time to decide.