First Peek into the First Firing 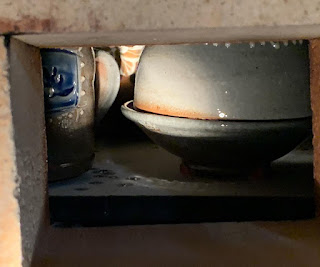 Last night, long after the kiln was off, I lay in bed worrying - as one does - about soda. Did I use enough? I used less than I did with my old kiln, because I switched soda application methods. I have read that more of the soda finds its way to the pots using the spray-in method than with the Gail Nichols soda-salad approach. I adjusted accordingly...but A) it's a new kiln. I can make an educated guess as to the right amount, but I won't really know until I have fired it a few times. and B) because their interiors are not yet coated with soda glass, sometimes kilns need more soda the first few times they are fired. I thought that probably would not be true of this one, because we pre-glazed the interior with a feldspathic liner glaze, but again, who knows? Not me, because it's the first firing!
My fears were unfounded (for once.) It looks like more than plenty of soda glass - if anything maybe a bit too much? Too much is better than not enough, all day & twice on Sundays. Looks like I got some good carbon trapping, too...again, maybe a bit too much? But this is nitpicky refining I didn't expect to have the luxury of until the 3rd or 4th firing.