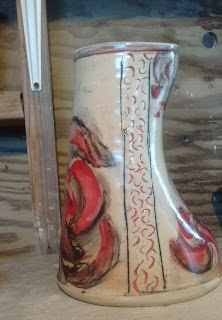 It seems the Fire Monkey* had one more shine for me this year: my firing was truly BAD. Much of the kiln did not reach temperature - the cones fell but they were apparently in isolated hot spots.
There were a few pots in the isolated hot spots as well, including this vase. It's an ill wind indeed that doesn't blow some good, and the pots that came out well were mostly the more labor intensive ones, and the ones that came out poorly can mostly be refired.

It does mean that I won't have pots for the Portland Pottery show, although I will still be bartending, dressed to the nines, as is my tradition. I don't have many opportunities to break out the boa, and I refuse to miss one.

I'm bummed, of course, but also philosophical: bad firings happen. (Not usually this bad but hey. Some firing has to be the worst firing. Although come to think of it this was nothing close to the worst firing I've ever had.) You'd think this would be an opportunity for one of my famous, epic, pity parties, but no; I find myself laughing: what else can go wrong? As long as it's not illness or injury, I'm grateful.

In other news, I resolved my camera dilemma by kicking the can down the road. When I went to purchase a new one (I was looking at one of these) I discovered that it does not have an infared remote. I thought that would be standard on mid-range & up cameras but I was wrong-wrong-wrong. What I ended up doing was just buying a camera exactly like the 12 year old one I had that died - an Olympus c-750 ultrazoom - which I know is adequate for website work although not for application photos. Upside: it was only $20 on Ebay, being an elderly version at this point. I was looking forward to the wifi feature - upload without cables, etc. - but that's for next time.

Anyhoo: since I don't have to set up a display table, maybe I have time to get my hair highlighted. The way my luck is running it'll probably turn green, but if so I'll put a red bow on it and call it holiday cheer!

Bless you all, readers. 💙

*I speak metaphorically, of course: I am well aware that this is my own fault! Bad Lori! Bad! This is why we do not put things off until the last minute.
Posted by Lori Watts at 6:15 AM