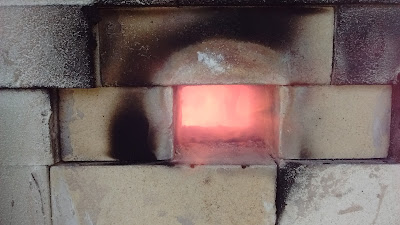 Two days until the pottery tour on Saturday! As usual I have a crazy lot to do, too much, actually, to get done. And my lawnmower broke. Repeating to myself: It'll be fine. This is not a crisis. I don't have Ebola, I'm not in Syria: those are crises. This is not.

I fired the kiln yesterday, in spite of a couple of hilarious (well, sort of)  mistakes I made in loading, due to being in a rush. I forgot to put one of the cone packs in, so I was flying blind on one side...and on the side that did have cones, I had all of the cones facing the same direction! Duh. That wasn't too big a deal, once I realized what had happened...I just had to keep moving my head from side to side while looking in the spy, so I could see which cone was which.

Thinking I may have to build one more layer on to the stack? It is the same height it was before the rebuild but doesn't fire quite the same. Yesterday it struggled to reach temperature, took 14 hours when it should have been done in less than 12. I know that weather can affect the firing as well, and it was a bright, high-pressure day, but it seems like I had this problem last time, too, and I was firing in the rain.

Some potters keep kiln logs, for this very reason. Maybe I should do that! HAHAHAA! J/k, not gonna happen. Sometimes you just gotta accept that you are who you are, and deal with the consequences of that.

Anyway, it's all good. In two days I will be wondering what I was all lathered up about.
Posted by Lori Watts at 6:09 AM