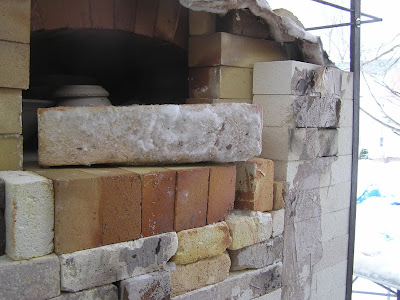 Someday  -- oh, far-off someday, glittering in the distance like an oasis -- when I've got the kiln all figured out, I'm gonna skip firing in the winter, Just pass on it. Spend January, February, and March making, making, making, and then fire it in the spring. The rest of the year can be full-cycle.

I loaded a bisque this morning, in the snow. It was actually quite pretty and pleasant, exccept for ever-present danger of slipping. So that was all fine until it came time to brick up the door, and I discovered that my blocks were not just under a pretty snow cover, but caked with ice as well; so I had to melt the ice of of each before I could brick up the door. Needless to say this slowed the porceedings down a bit. The kiln was candling all the while, though, so it probably won't slow the firing any.

This firing is (as all will be for a while) an experiment; I haven't had the propane refilled since the last glaze firing. That was a super-long firing, and the gauge is at 50, but I certainly hope I can get a bisque out of what remains in the tanks. If not, well, I'll have learned something.