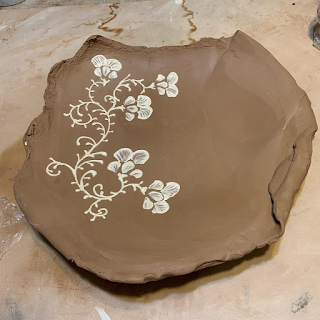 I & the other members of the professional organization I belong to, the Central Maine Clay Artists, will be part of a group show at Monkitree this summer! I've done many fairs & sales but it has been years since I've had work in a gallery show.

There are reasons for that!

When I was young and full of energy, right out of grad school, I planned to be the kind of academic potter who got on the cover of Ceramics Monthly. I applied to themed gallery shows alot. I got in sometimes, too! Trouble was, I had to charge so much to cover the jury fees, which were $25 -$45 (a pile of money in 1992 making $6.75/hr) - and you have to charge enough to cover the shows you applied to & didn't get in, also - the shipping to & from (and again, prices had to cover the shipping costs of the ones that didn't sell - and the packing material. The galleries always took 50%, too, which I never minded - a good gallery earns that fee, and it costs money to keep a business like that open - but it meant I had to double all those previous fees in order to cover them. I was making functional ware, so if I applied with, say, a pitcher, it might have to be three or four hundred dollars. Which made it harder to sell. Which meant the price of the ones that did sell had to go up to cover the shipping and so on of the ones that didn't, etc, etc, world without end, amen. Were there people willing to pay those prices, in the 90s, for functional ware? Sure, and there are now, too, but mostly for the work of potters they've heard of. If the price was a vicious spiral, reputation was whatever the opposite of that is - a fortunate spiral? If you became known, more people were willing to pay more money for your work, and that increased your reputation so that more galleries wanted to carry you, creating scarcity, pushing the price you could ask up, etc, etc, world without end, amen. It does work for some people! Maybe they are better potters, maybe they were luckier, maybe they were better at networking. No shade here - I'd have done it if I could have picked that lock.

All of that also applied to time - the time I spent applying, packing & shipping ware, unpacking the ones that didn't sell (not to mention the time & cost of bringing pieces to a professional photographer, which was the only option, then) was time that I didn't spend making stuff, resulting in fewer pieces to sell.

Anyway I stopped doing that once I started doing art fairs & discovered the joy of selling directly to the people who were going to use the pots. Art fairs cost money & time, too, but the ratio of time making/time selling/money made was a happier one for me. I supplemented - I still do - with consignment & wholesale.

Yikes that was a long & mostly irrelevant story. But a gallery show after all this time is exciting! Especially since I get to skip over all the tedious applying and shipping. The show is called Exploring Maine: A Maker's Journey:

Potters explore new shapes and designs with Maine in Mind.

Central Maine Clay Artists offer artistic and functional designs that allow you to take Maine with you. Each of the clay artists has their identifiable style but with this show they are exploring new shapes and designs that gather inspiration from the state that offers so much- powerful ocean, scenic lakes, rugged mountains, delicate wildflowers, exceptional dining, dramatic seasonal changes, and so much more.

I love the theme, because, you know how you've got your body of work, and you like your body of work & want to keep making it, but there are also a bunch of other, half-formed ideas pressing on the inside of your head? Maybe you make them but they don't fit with your main work so they sit in the studio getting dusty, or maybe you don't quite find the time to make them. This show is specifically for those ideas. For me, it's the torn-edge dark clay slab plates & platters. I have a few, and have committed to make about 15 pieces for A Maker's Journey.