Then There Were Six

Hey, pull up a chair! Pour yourself a coffee (in a handmade mug!) & tell me what's new with you. Me? Making pots, trying like hell to sell them; teaching classes, still at Portland Pottery & now at Hallowell Clay Works; and - oops - got a new cat. 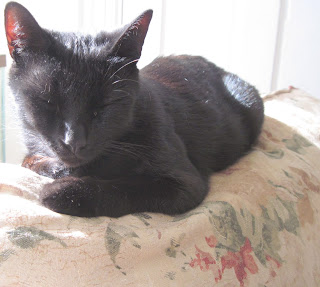 Skinny Cat joined out family in October. We've known him for about a year & a half - he was a neighbor's cat who just liked to hang out on our deck when it was sunny. Somewhere near the end of August/ beginning of September, we noticed the cat we referred to as "skinny cat" (to differentiate him from "scruffy cat," "little gray cat," and "chubby cat," all neighborhood visitors) was not looking too good. He was now VERY skinny, with scabs under patchy fur. Shortly after that we noticed that he wasn't actually going home anymore; at night he just found a hiding place in our garage.

Doug went over & knocked on the neighbor's door, meaning to ask them if they were missing their cat...and they had moved away. Without Skinny! We called the shelter, thinking maybe on moving day they hadn't been able to find him, though that seemed a long shot - they never came over & asked if we'd seen him, even though they knew our deck was a favorite spot of his.

We spent six weeks trying to find a home for him, and in the meantime tried to make the garage comfy. Doug often smokes out in the garage, so he and Skinny spent a lot of time together. By the time I was able to persuade someone to take him, it was too late! They had bonded. Doug's mother has been ill & it has generally been a pretty stressful time for him, so I decided: if one more cat provides him with some comfort, is that really too much to ask?

Happy Solstice to you! December 21st was my Dad's birthday, too, so I always think of him on this day.

How sad that there are people in this world that would move away and leave a pet behind. Skinny Cat is very lucky that your were his neighbor.

Thanks, Michèle! I am convinced that I incurred a great debt to the goddess Bastet in a former lifetime, which I am paying off in this lifetime, one cat at a time.

But Skinny is no trouble - he's a very demure little cat. <3