It's been a couple of years since I expanded my glaze palette. Mixing glazes is not my favorite thing to do (if it's yours, please let me know! 😄 You might be utterly unique.) The glaze kitchen tends to get cluttered up with bikes and gardening equipment, so I have to clear it out before I even begin. Every firing seems to be pushed against a time limit (and whose fault is that?) so adding an additional task - mixing a test glaze - isn't feasible. But! I am starting to get antsy for new colors & surfaces. The green in currently have I rarely use - it's a little dark for the candy-coated vibe of my ware. This, though: this promises apple green! That would be right up my alley.

It's not currently chemically quite right for soda; and I will want to do a ^6 conversion on it also, to have both possibilities. I am doing a lot less ^6 these days - I find the soda glass itself is just not quite as luscious, somehow, so I've been unwilling to quit ^10 entirely. Keeping two sets of glazes and two sets of claybodies is actually something of a strain on the space limitations of my studio, in addition to the ever-present risk of getting a piece or a glaze in the wrong firing, with results either disappointing or disastrous, depending on which way it goes. Right now I fire to ^6 for a couple of orders, both of which have more glazed ares and less bare clay or flashing slip. It works well for these,but one of the questions I need to answer in the new year is whether it's worth the storage space & the risks.

I look forward to the Week of Reflection to decide this and other questions.

The easier conversion, obviously, is the one to make this glaze (hopefully!) appropriate for soda firing. It has the necessary percentage of whiting, so I would only need to replace some of the silica with boron. There's a goodly amount of silica in this recipe, too: 28%. I am thinking to switch out 3% of it with boron and run it up the flagpole. ETA: NOPE

Which is to say, run it through the glaze calculation software & see what  it turns up.

Here's the recipe as-is, which I got from Claybucket. 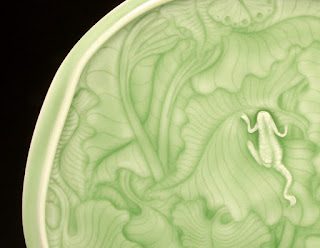 Here's the recipe with the alteration I hope will adapt it for soda, with the changes highlighted:

Now, this recipe also has a large percentage of potash feldspar (Custer Spar) at 43%. It's probably worth trying a 1-for-1 substitution of Custer for Neph Sy - that might be enough (again, GlazeMaster might have something to say about it.) If that doesn't do the trick itself, I'll have to remind myself which frits are best for these colorants and for soda.

The first mix is on my to-do list for today; I'll be testing it in my own kiln next week and in the Portland Pottery stoneware kiln as well, so I can see how it performs without the influence of soda.
Photos next week!
After all this, I decided it would be smart to mix it as-is first, because every now & then a glaze surprises me & does just fine in soda.

*Why why why doesn't spellcheck know the word "celadon?" I mean "tenmoku" & "shino" I get but celadon is just the name of a color. 😕
Posted by Lori Watts at 7:56 AM

Lori, have you tried your cone 6 body in a higher firing? I did this a few years (OK, closer to 20 years, which is why I don't remember who made mine :>)) ago in a wood kiln and things held up fine to cone 11-12. Just put a piece in a bowl with a bit of wadding under it in case things don't go well, but you might be pleasantly surprised!

Not 100% sure if I've tried the body I am currently using, but I have more than once gotten ^6 clay - or seen friends get ^6 clay - in the ^10 kiln. It has never gone well! But I could put a little test piece in my next firing, maybe I will get lucky!