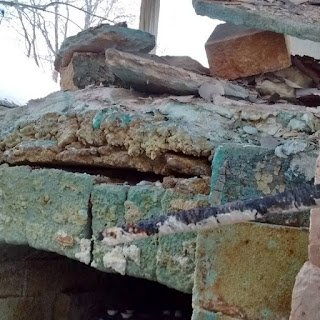 Wouldn't you just know it? I feel like after 7 years together, this kiln & have have just hit out groove - I was getting good firings (almost) every time, coming in under 11 hours, good color, even soda...but when I went to unload this last firing, I see that one of the threaded rods that holds the angle iron skeleton together has rusted through.

The others are still in good shape - this was the one right over the door, so it got some heat and some soda every firing. Since it has broken, the walls have leaned outward somewhat, so simply replacing the rod is not really an option. Looks like I am going to have to take down the arch, and the two side walls, at a minimum- and if I am doing that I might as well re-do the back wall as well so I can replace the angle iron with a thicker gauge.

In other news, Sylvester - the kitty whose adoption fee we fully sponsored with the cat dish fundraiser - was adopted last weekend! I had hoped to do another cat dish fundraiser in a few weeks but of course the kiln rebuild is going to bump everything back.

At least the order I had in this firing looks good. I'm gonna need that $$.