The kiln project is not very photogenic at this stage! But it is coming along. The old kiln is gone - or rather it is in stacks of (mostly reusable!) brick in pallets in the kiln yard. The plumbing is disconnected, the rubble brick (mostly) in my truck waiting for a dump run.

One bummer note: I cancelled my participation in the Common Ground Fair. I thought I could squeeze in a kiln rebuild & still have pots for the event but...well, maybe I still could have! But there were too many things that had to go exactly right for that to happen. The big one that loomed for me is that the burners are scheduled to be delivered the first week in September. There's like an 8-week lag between order & receipt. The kiln itself will be built by then but obviously I won't be able to fire without burners...and then it will take some time to get them plumbed, and I can't schedule the propane guy until the burners have arrived...and what if they come a week late? That's something neither I nor Tyler can control. I decided to cancel out of hte fair while they still have plenty of time to fill in an alternate.

To my surprise, they offered me a booth refund! I think this might be a pandemic thing but either way it was very generous. That money will go directly to the kiln project.

Back from my dump run! As always I saw lots of bald eagles, including this guy: 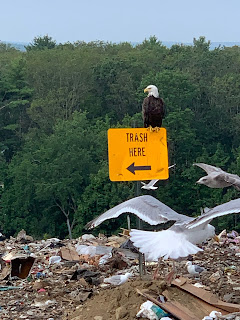