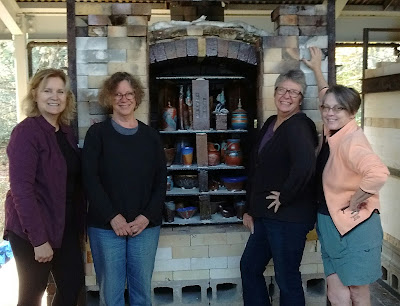 Last weekend I ran a soda firing workshop at the Watershed Center for Ceramic Arts. We opened the kiln on Wednesday - I love that ta-da moment. Here are my Fab 5, minus one who couldn't be there for the unloading (missed you, Reen!)

The results were good - dare I say, fabulous? But the firing was not without its adventures. Most notably, I had purchased a new sprayer for the workshop, and the hose kept popping off during the firing, spraying anyone in its path with a jet of hot soda-ash infused water. It wasn't as bad as it sounds, I got it right in the face, including one eye, and was uninjured. But it certainly kept things interesting.The firing also ran longer than I had hoped; in the past, the kiln has reached temperature around 5:30 pm, whereas we ran until about 8:30 this time. This kiln has recently been rebuilt, and this was my first time firing it since. In retrospect I should have partially closed the passive damper much earlier than I did. After I did so, it was only about 15 minutes before the last 10 cone fell.

Nevertheless, good results make it all worth it! I think everyone was happy. Next Soda Workshop I'm hosting at Watershed is in the spring: May 20 & 21st. Watch this space for sign up info.