I realized I didn't do my usual unloading day post after the last firing, because most of the pots in the kiln had immediate destinations. Also because that was the day the camera died - after I took the photos - and I had only a foggy idea how to get them off the chip.

But, got it figured out! As I said, most of these pots are gone - many to Gray Fox Gallery, in Rockland - so I didn't do individual pottery portraits. Hopefully after the next firing I will have pots to repopulate my online store! Anyway, here's how the last firing looked. It was very...stripey. In a good way! 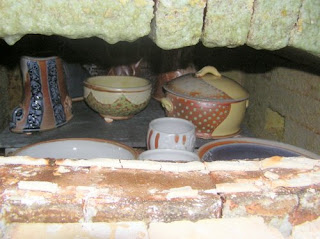 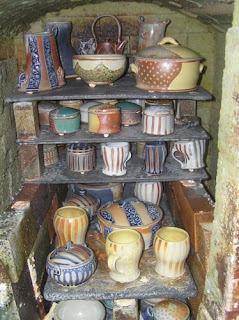 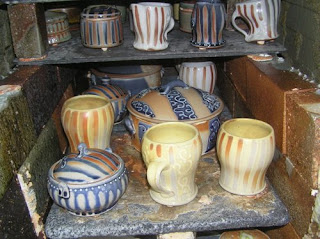 These are ^10. When I fire ^6 the pieces have more applied glaze, less bare soda areas. The ^6 glazes really are as good as the ^10, but at ^6 the soda glass itself is just less...luscious, I guess. It's subtle, but I can see & feel it. I also discovered that if I am meticulous about cleaning out the burner channels after each firing I can increase the efficiency dramatically - enough so there is not much difference between ^6 & ^10 propane consumption. So, with all that, I am starting to wonder if it is worth the storage space (and potential for disaster!) to keep around clay and glazes for both.

But all that is for another day.

The studio is still full of bisqueware, probably enough to fill another firing, and though I am having sort of a grasshopper summer, I have been glazing a few every day, so look for another unloading day, coming soon.
Posted by Lori Watts at 7:05 PM

Glad to see your beautiful pots. I guess pottery started being cone 6 to be more environmentally green, use less fossil fuels or something. I didn't know you could get soda to work at cone 6. I'd like to see a sample of the difference to cone 10.