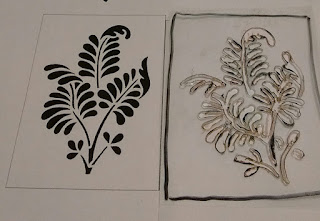 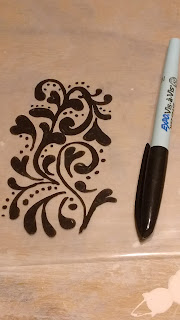 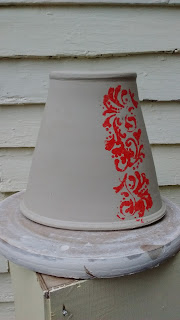 Did you find this post useful? Drop a dollar in the tip jar in the column to the right!
Posted by Lori Watts at 10:49 AM

Don't breathe those plastic fumes. Work outdoors with a fan to direct them away!

Thanks! I know, my summer studio is outside.

You might try a similar tool that is a electric stencil cutter available in many craft stores. I use mylar sheets and cut on top of a glass pane.

Thank you, Gina! I will look into that.

Nice designs!
Hayne Bayless uses Tyvek and I think he cuts with an exacto knife. He keeps his stencils in a binder, slid into plastic sleeves. I wish I could be that organized!

There's a lot of small tweaks that you can do to this process to move it towards the look you probably have in mind. While I'm impressed by the out of the box thinking, the plastic fumes coming off that wood burner isn't a idea that you should pursue without serious ventilation. The thickness (or thinness) of your slip will blob up a good design too. No matter how good the stencil is, a temperamental slip will ruin your efforts.

Thanks Joel! I did try several different slip thicknesses, to see what effects I got. I actually preferred the thicker slip, because it creates a raised, almost lacey design. The thinner slip was also more likely to get under the stencil and make the design blobby.

It seems like "doing it outside" is about as good ventilation as one can get, and anyway, it's not a thing I do every day. One the stencils are made they last a very long time.