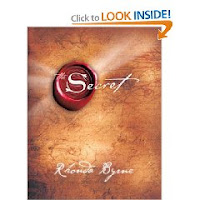 Remember that book, The Secret, from a couple years ago? On page 1, it promised ..."The Secret gives you anything you want: happiness, health, and wealth. ..."
A couple of my friends bought copies, and were all into it for a while. Not to spoil the ending, but the much-vaunted secret is that you walk around actually believing that what you want to happen, will happen (even better: already has happened. Try that one for making people think you are crazy.) Then the Universe, or whatever, will reward your faith by giving you what you want. Or something. "It is exactly like placing an order from a catalogue. … You must know that what you want is yours the moment you ask," writes author Rhonda Byrne. It sounds as though Byrne took Yoda too seriously: "I don't believe it !" says Luke; "That is why you fail," says Yoda. It was just a movie, Rhonda. Emily Yoffe, Slate's Human Guinea Pig, wrote an entertaining article about it in 2007.


My immediate reaction: what a bunch of hooey. In the first place, how can you believe what you don't believe? It is logically impossible, as belief is not a function of will. Further, given the appropriate level and form of mental illness, a person might believe all manner of nonsense. "Oh, Ebenzer thought he was Julius Ceasar; so they put him in a ho-o-ome. Rubbed his body with medicinal compounds, now he's Emperor of Rome." But Ebenezer is still a patient in a mental hospital. I could go on, as I am still convinced that The Secret is drivel; but that is not what I'm here to write about today.

While you can't will yourself to believe what you don't, I am still perfectly capable of believing, against my will, things that I know to be untrue. For example, I believe that I am some kind of money repellent. Now, I have enough to eat, I own my own home, none of my bills (well, except my oil bill) are past due -- I am doing alright. However, it stands as a point of dogma that in any given business situation, I will make less than other people in the same situation. Baltimore ACC show? Never took more than $12,000 in orders, when some others were writing hundreds of thousands. Opened a retail store with other artists? My biggest month to date was around $800 in sales, while my partners made between $1200 and $4000. See what I mean? Of course, it is a chicken/egg conundrum: do I believe I can't make money because that's the way it always turns out, or does it turn out that way because that's what I believe? I was born on a Saturday, and all my childhood heard the old rhyme about "Saturday's child works hard for a living;" perhaps I am endeavoring to make it so.

I have an opportunity to test these hypotheses, because I have found on opportunity that I truly believe is a good fit for me; one at which I genuinely believe I can make money. I am not forcing myself to believe! Unfortunately I believe in the absence of evidence: I believe that Etsy can work for me. It seems so perfect: I am online all the time anyway, and I've always thought that my work is far enough off from the mainstream aesthetic that many, many eyes have to see if before it can do well. Etsy plays to my strengths. If I put enough effort into it, it should work. It will work! (It already has worked? No, can't go that far yet. Sorry, Rhonda.)
Posted by Lori Watts at 5:04 PM

Wonderful post! Love the line about believing what you know to be untrue even if you can't will yourself to believe what you don't believe. So true. Good luck with Etsy - I, too, believe it will work for you.

Good post indeed. I especially liked the Slate article. Good luck with Etsy; it does sound like a great opportunity. I've been meaning to try it myself.