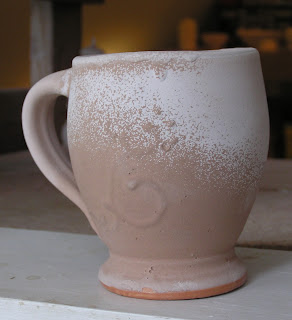 This tip is an oldie but a goodie for reduction firing potters: glaze your shinos first, so they have time to fully dry before the firing. This one was glazed on Tuesday. See the white mottling on the dry glaze surface? That's soda ash, which is the ingredient in shino which does the carbon trapping. As the glaze dries, the soda ash migrates to the surface. The more soda ash on the surface, the more carbon trapping you get - the key to that smoky, iridescent look for which we love shino.
This is one of the mugs for the Central Maine Clay Artists Mug Season fundraiser. I'll post a finished photo so you can see how the carbon trapping comes out.
Posted by Lori Watts at 7:30 AM