Silver Lining Made of Mucus 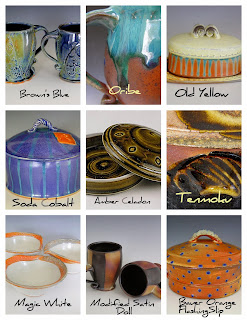 I woke up on Tuesday of this week with a painful sore throat, but decided to just power though - no sick time for classes, and I sure as shit can't afford to not get paid. So, give me some throat lozenges and I'm off! That actually went okay most of the day - you know how sometimes you feel better once you get moving - but around 8:30 pm I hit a wall, and ended up bagging out a few minutes early. My students cleaned my wheel, bless their hearts.

I spent the day in bed Wednesday, though I could ill afford that, either, with holiday events coming up, but sometimes your body just says, "Tough shit. You're down, and you're staying down. Get used to it." Thursday was better and I again scraped myself together enough to get to class. There was that little matter of the delay caused by a plane landing on the interstate, but wevs, it was fine.

I swear there's a point to this recitation. Oh, and here it is!

On Friday, still sick but a little better, and unwilling to give up another working day, I spent the day in bed compiling the Glaze Notebook! You remember: the popular reward for Kickstarter backers, that was due in September? Yeah.

Like so many things, it seemed daunting before I started. Most of the testing and revising work is done, so really it was just assembling the best recipes and typing up notes on firing. And like so many things, it's fun once you get started. I want to thank my backers for their patience, and I hope it's worth the wait. I expect to have PDFs out by the end of the month [edit: turned out to be by the end of the day! :)], and hard copies going out shortly after that. Once those are all completed, the Fine Mess Glaze Notebook will be available for general purchase.

Last spring I renewed my intermittent subscription to Pottery Making Illustrated. I like the magazine, as well as its older cousin Ceramics Monthly, but magazine subscriptions are not always in the budget. I chose PMI over CM because I am often looking for ideas for class demos; some of my students have taken my classes many times over, and I like to be able to show them something new once in a while.

November's issue features a how-to for slab-built champagnes flutes which are clever and elegant, but easy enough for beginners to do. I demonstrated these for my classes last week, and saw some delightful pieces come out of those sessions.

The author of the article, Marion Peters Angelica, makes tons of amazing slab-built things, in addition to the champagne flutes that were the focus of the article. Lookie here: 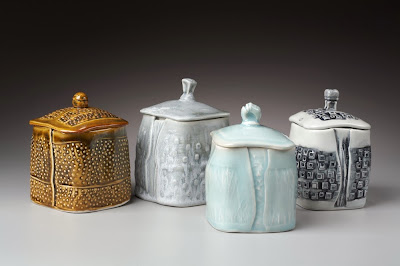 See lots more of this potter's amazing work at MarionAngelica.com.
Posted by Lori Watts at 4:05 AM 2 comments