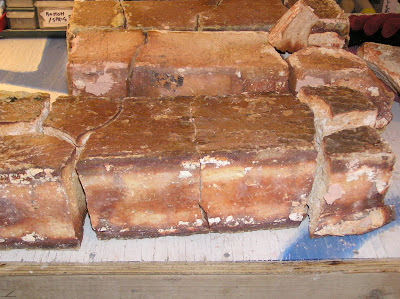 Remember when I cast those giant bricks for the door of the kiln? And I couldn't talk about anything except castable for a couple of weeks? Well, now those bricks are in rough shape. They've served well in that they are much more insulatory than reguaar hardbrick would be, but they are pretty brittle, and some of them are in so many pieces that it's just silly. It's just short of bricking up the door with rubble. 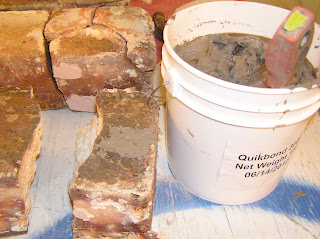 I got some furnace cement from INFAB, and today I am setting to work sticking these babies back together.
Luckily I've kept all the pieces together; otherwise this would be a nightmare job. As it is, its just glue & stick, glue & stick. The specific product I'm using is Quick Bond 3000,  a high-duty air set mortar...maybe some kind of epoxy mixed with fire clay? I don't know. I do know that it adheres faster and better than I expected. It remains to be seem how well it will hold after firing. I wouldn't be surprised if those joints were far more fragile than the brick itself, in which case I'll either have to just keep pasting, or re-cast the blocks.

While I've got the bucket open, might as well repair a few softbrick, too: 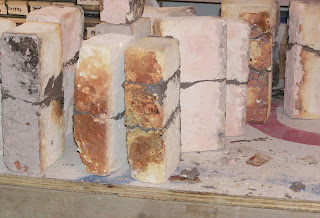 Kiln maintenance isn't my favorite thing, but it's gotta be done.
Posted by Lori Watts at 10:35 AM

That doesn't look like fun but it does seem to be faster than recasting. How long do you expect the bonds to hold up?