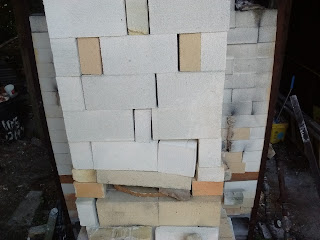 So, my firing was cruising right along: 012 by 9:30 AM, out of body reduciton by 10. But when I pulled out the damper a bit for climbing reduction, something unexpected happened: the bricks around the damper slipped outward just enough that they were no longer entirely supporting the bricks above them!

Well, this can't be good.

At first I thought AAAAAGH THIS THOUSAND-POUND STACK OF HOT BRICKS IS ABOUT TO FALL ON ME AAAAAGHH!!!! I figured I'd have to shut 'er down, dammit dammit dammit. I really did not want to do that: I have a fair coming up next Saturday; these pots are for that, and without them I wouldn't have much inventory at all. After the panic passed I remembered: the soft brick is only sort of an outer sleeve, to keep people (people like me! Exactly like me, actually) from brushing against the hot hardbrick of the stack. There's an inner hardbrick sleeve which is not being supported by that one lintel brick. It has its own lintel brick, which had not shifted, because if it had, I'd know it; I wouldn't be able to move the damper anymore.

The damper was, luckily, in a pretty good position when the shift happened, because while I could still move it, I didn't like to do anything that might cause any more shifting. Crossing my fingers, toes, and everything else I have two of, I decided to just keep firing.

All those crossed body parts must have worked, because other than this (rather significant) one, the firing went without incident: ^10 fell around 3 pm. Unloading is Wednesday, Designing Women is Saturday.

And next week? Rebuilding the stack.
Posted by Lori Watts at 2:25 PM

Wow! That's enough to make your heart race in a not-so-good way!

Hopefully, everything will turn out just fine! Good luck!