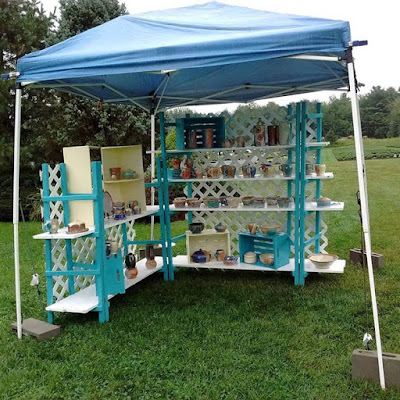 The firing went well, the booth is finished (more or less), and I borrowed a canopy because I was stuck like Buridan's ass between the EZ-Up Eclipse or Envoy options. (The one is so expensive! But what if the other is a cheap piece of shit? But what if it would have been fine, and I wasted all that money...?) My friend Karen Dicenso took pity on me and lent me hers, so I could see the difference between that and my old canopy (which perished some years ago in and unfortunate encounter with a strong wind and a stronger police officer.)First impression: if I do well enough at this show, I'll buy the Eclipse. The Envoy is adequate, but the Eclipse is much, much sturdier.

I may have opportunity to fully test the canopy, as rain is expected this weekend. It is, in fact raining now, with intermittent showers predicted for tomorrow. I'd be bummed about that but earlier in the week the forecast for Saturday was "torrential downpour," is intermittent showers doesn sound so bad. Besides, every time I check it's a little less threatening.

I had a bad moment just after I took this photo, when I decided to try out the offline mode of my Square credit card reader, and discovered, after much crying and gnashing of teeth, that the device I have is no longer supported. NICE OF THEM TO LET ME KNOW. I could have gotten another for free but since I need it tomorrow, that wasn't going to work, so I went to Best Buy. There was exactly one person in the store who knew what The Square was and where in the store to find it; and when I did find it, there was only ONE left, and I had to buy a case with it, because they didn't have any without. It was a case for an iPhone, which I don't have, but whatever. I have since tried it out, and yes, thankfully, I can now take credit cards again. Disaster, averted.