And Now for Something... 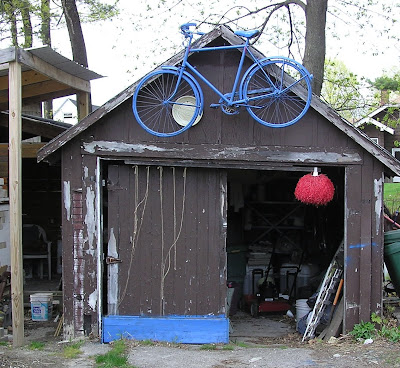 ...completely different. Today was given over entirely to gardening and yard work. We bought a new mower as our old mower had been difficult to use ever since losing one of the wheels. I was able to give the old one to a neighbor who thought he could weld the broken bit of the frame, and godspeed to it. Even better, we were able to replace it with a used one for only $100, and it's not even a piece of shirt!

But that was just the beginning. I pulled up weeds, mulched, cleaned out the car, and dug through old boxes of pots in the shed and found some good ones I had forgotten about. And speaking of sheds, mine has been an eyesore since I bought the house, but it's sort of low on the priority list, so an eyesore it remains. And if a  thing is destined to be ugly, you might as well work with it. It's like I tell my students when they throw a pot they don't like: If you already hate it, alter it! Stretch it, bend it, cut it, squeeze it. You've got nothing to lose.

And I already hated my shed -- although since any shed is better than no shed, "hate" is perhaps the wrong word. So we've begun to make it part of an assemblage, beginning with the blue-to-the-wheels bike, and the blue planter below. The planter will hold morning glories that will climb twine up to the blue bike and engulf the front of the shed. I've got some other items in mind to add, and I will keep you updated as this outdoor artwork grows.