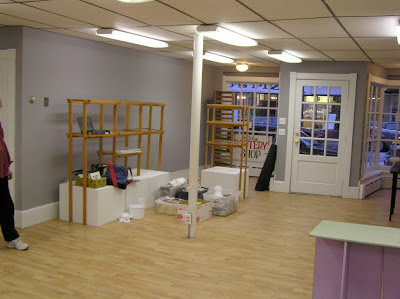 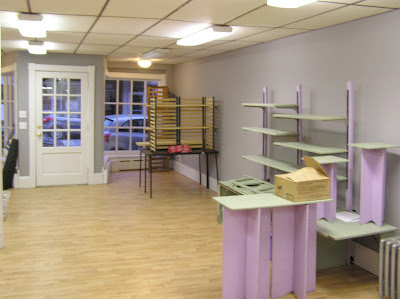 I spent part of my evening in Gardiner, ME, with the Central Maine Clay Artists, making plans for our Holiday Pottery Shop. This is a new adventure for me, although not for them - CMCA has had a shop in the month of December for the last four years. It's a great way to take advantage of holiday shopping without the commitment of rent and utilities - not to mention staffing - for year-round premises.

It was a bit of a cliffhanger, looking for a space. We considered several spaces in Hallowell, but they were small and the landlords reluctant to rent for a single month while there was still a chance they might take on a permanent tenant, because if that doesn't happen by December it's probably not gonna happen until May.

Gardiner, one stop downriver, came on the radar because the city was actively seeking pop-up stores to occupy some empty store fronts and bring people downtown. The rent was so much cheaper and the space was so much bigger that in the end we were seduced away from Hallowell.
Tonight we met in the space, assigned shelf locations and divvied up the days to man the store. A few of us had shelves to set up, no one yet had ware...it doesn't look like much, not yet, but just you wait.

I rushed home to paint my shelves. I haven't done a serious art fair since 2003 - the Baltimore ACC show, the one when it snowed three feet and the entire city shut down, even the Seven-Elevens. Didja ever eat out of vending machines for three days? But I digress. I haven't done a serious show since 2003, but I've done a bunch of rinky-dink shows, and my display looks decidedly...rinky-dink. So I'm painting and generally spiffying it up.

The Grand Opening will be Friday, December 7th at Gardiner's First Friday event, but we hope to have the doors open sooner. We're told Maine Public Radio will be in town this Saturday, specifically to cover pop-up shops, so it would be nice to have someone in the store for that. I'm the first to admit that I have a face made for radio, but I will be loading a glaze kiln on Saturday.
Posted by Lori Watts at 5:00 PM

I've never heard of pop-up stores, but it makes a lot of sense. Good luck!

Good luck, hope it goes well for you! : D

I love this type of pop up store. Good luck with the holiday season at the store.

What a great idea, my pottery club in california started a pop up just as I was moving and I think they did well, but they were in Ventura on the main street so how could they not do well with that location. Hope your sales go well, lol at your eating from a vending machine for three days, ugh.