Mother, Should I Build the Wall? 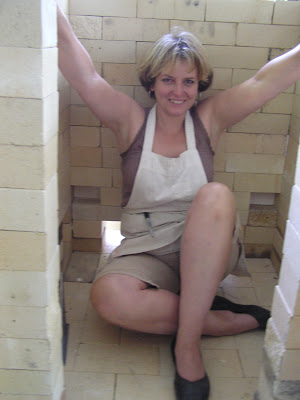 Ooops, too late, already did it! The walls are built, thirteen courses of three-inch brick. My next step is acquiring angle iron and tie rods, and welding the exoskeleton. Well, not welding it myself, exactly, but getting a friend with a portable welder to come out and do it. Portable welders must not be too uncommon, as I know two guys who have them, who have expressed a willingness to help.

When I started figuring out the stack, I discovered two things: One, I had placed a soda port too close longitudinally to the flue, such that the stack will block it; and two, the Fourth Law of Kiln Building, which states: However many cinder blocks you have, you need two more.

I finished my efforts last night in time to attend a reception at the Center for Maine Craft, a preview of the plates that will be featured at Watershed's Salad Days gala. (That's coming up July 10th -- hope to see you there!) I love those events for more than just free wine: I learn so much talking to other potters. Last night I came home with two helpful kiln-building ideas:

1) I could probably get away with building the arch out of superduty soft brick, despite conventional wisdom that the interior of a soda kiln must be entirely lined with hard brick. It is certainly true that the lower half of the walls take almost all the abuse; has anybody out there had any experience with this? I'd love to use IFB instead of hard brick, for the obvious reason of its (much) greater insulating qualities, but also because it's cheaper and easier to work with.

2) A potter whom I greatly respect mentioned that he had heard of people glazing the interior of their soda kilns, either with a very stiff glaze like a shino, or perhaps with a wollastonite glaze. He wasn't ready to vouch for this technique, not having tried it, but I am quite intrigued by it. It appeals to me on an aesthetic level -- remember, I am enamoured of kilns as beautiful objects -- and also because it seems like one of those ideas that is so obvious that you wonder why it isn't standard practice. I can't think why it wouldn't work. However, there is a world of difference between "Lori can't think of a reason" and "There is no reason" so again, I'd be delighted to hear from anyone who has seen this done.

It's a gallery-sitting day for me. so I won't make any progress today, except the mental work of figuring out my soda port problem. But do me a solid: poll your potter friends and let me know if anyone has tried either of the ideas I mentioned, and how it worked out. You can comment here or email me at info@finemesspottery.com with any news. It takes a village!

at the 'art farm' i sometimes attend in wisconsin, they sprayed the interior of the wood and soda kiln with a very thin layer of shino. maybe email donovan at masterkilnbuilders and see what he thinks..it certainly is quite a 'permanent' move.
well done so far.

Donovan! I should have thought of that. I've received another good suggestion of an authority I could consult, as well - Vince Pitelka, of the Appalachian Center for Craft. So that is my assignment this week: contact these guys and get tehir thoughts on the matter.

I have also seen the interior of the kiln finished with a kiln wash substance i think that was in a video from ceramics daily..would love to hear what you come up with as i also have plans to build a soda kiln..

Did you ever find out about this Lori? I'd love to know what you learned.